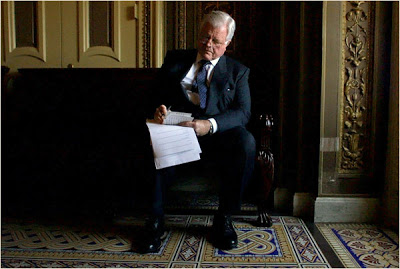 For some people of a certain age, Ted Kennedy will always be the rich drunk who drove off the Chappaquidick Bridge and sent Mary Jo Kopechne to her watery death. For others like myself, he will always be the scandal tarnished baby brother who would never follow in the footsteps of Jack or Bobby but nevertheless did great good. 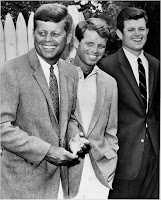 An extraordinary 300 laws bear Kennedy's name. In fact, his hands are all over virtually every major liberal Democratic legislative initiative of the past 46 years and a goodly number of bipartisan ones, as well.

While Kennedy had an outsized influence on domestic policy,

he was outspoken about foreign affairs, as well. He opposed the Vietnam and Iraq wars, led congressional efforts to impose sanctions on South Africa and worked for peace in Northern Ireland.

He married for the second time in 1992 to Victoria Anne Reggie, a remarkable person in her own right because she did so much to stabilize a personal life long marked by scandal, and he was a surrogate father to his brothers' children. 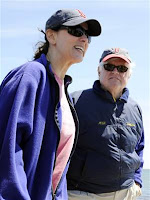 While the stain of the death of Kopechne (whose birthday ironically was today) may have prevented Kennedy from ever becoming president, he arguably was more effective and got more done on Capitol Hill.

Although he was called "the Lion of the Senate," most of us do not remember Kennedy for his accomplishments because he was so self effacing, although there could be no more poignant a reminder of the greatness of this exemplar of noblesse oblige than when his Senate colleagues -- liberals and conservatives alike -- wept after it was announced that he has been diagnosed with brain cancer.

That disease has now taken the last of the Kennedy men in his 78th year. That he did not live to see his most cherished goal attained -- the reform of health care -- is sad, but there would be no greater tribute to a man who was born into one of America's wealthiest families but worked tirelessly for the downtrodden to pass it in his memory and in his name: The Edward Moore Kennedy Health Care Reform Bill.

Top photograph by Steven Crowley/The New York Times
Posted by Shaun Mullen at 5:49 AM
Email ThisBlogThis!Share to TwitterShare to FacebookShare to Pinterest

A sad day for us all, and I do fear for the future of health care reform more now than before.