The Afganistan-Pakistan War: What Good Is It For? (That's A Trick Question.) 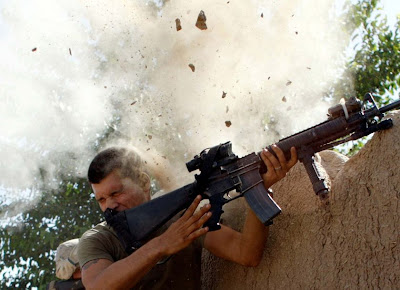 A MARINE COMES UNDER FIRE IN AFGHANISTAN

Barack Obama inherited two wars. The war in Iraq should never have happened, of course, but it did and George Bush kicked the bloody can down the road and into the lap of the new president. After 9/11, the war in Afghanistan inevitable, but

Bush starved it of boots and resources to feed the neocon beast that had pushed him into the first war.

It is probable that the country will devolve into chaos when the last troops are gone, leaving the situation in the Middle East more chaotic than before the ill-fated invasion to topple Saddam Hussein became the Occupation From Hell and wasted over 4,300 American lives. Thanks, neocons.

If possible, the situation in Afghanistan (and neighboring Pakistan) is even more volatile as the U.S.-led NATO force death toll ticks ever upward. There have been 1,330 deaths since the post-9/11 invasion, small potatoes compared to Iraq, but the pace has picked up considerably and August will have been the bloodiest month by far and 2009 the bloodiest year by far.

As was the case with Vietnam, public opinion has been observed in the breech when in other post-World War II conflicts, but it is kind of sad that a majority of Americans now oppose the Afghan war when you consider that it is the main theater of the War on Terror. Two reasons for this: Americans are a distracted and war weary people and it's pretty obvious that the Taliban are winning. 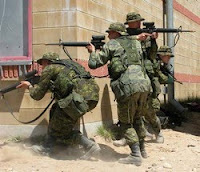 counterinsurgency campaign. While the U.S. military learned belatedly in Iraq that traditional symmetrical warfare was a non-starter and the Surge strategy was built on the classical tenets of asymmetrical warfare, such a campaign in Afghanistan will take years and there simply may not be the money, let alone the will power.

Add to this the fact that seeming signs of progress such as the national elections last week, growth of the Afghan army and infrastructure improvements are illusory.

There is deep contempt for a central Afghan government that is abjectly corrupt and incapable of defending its people. Afghanistan remains a safe haven for the Taliban

and other terror groups that are expanding their turf. There are too few troops, they are too widely dispersed, do not have the support of the locals, and too slow to adapt to counterinsurgency tactics, and then there is presence of those Iraq war bogeymen, the hired thugs of Blackwater.

There is another seldom remarked on aspect of the bathos of Afghanistan: Unlike Vietnam, which had rubber and oil during that war, and Iraq, which has oil and more oil, Afghanistan has zero natural resources to export. (Opium doesn't count.)

with nuclear weapons and an intelligence service that works hand in glove with the Taliban and other terror groups.

The AfPak policy shared by President Obama and Prime Minister Gordon Brown, whose British troops are only outnumbered by Americans, is democracy building and a strong Afghan state. If that sounds depressingly familiar, as well as a recipe for making the same mistakes all over again, it is.

Top photograph by Goran Tomasevic
Posted by Shaun Mullen at 12:30 AM
Email ThisBlogThis!Share to TwitterShare to FacebookShare to Pinterest

You make a hell of a lot of sweeping generalization in this article without backing them up by much analysis or argumentation. Saying things that we hear on TV all the time as if they are gospel hardly makes your blog valuable, particularly given your lack of serious analysis, as I said.
I am just wondering; you are some kind of expert on warfare why exactly? Because you went to a hotel in Saigon and wrote about a war you didn't fight? Is that it? Did you even study war seriously in books?
I only say this because, as someone who has studied war on the receiving end of live fire, and at a graduate level formally, I grow tired of bloggers chirping in repetition to the banal TV media without offering anything new or considering any possibilities other than the standard fare.
Sorry to sound harsh. I have a blog myself (where I have repeatedly offered a detailed grand strategy for Afghanistan, btw), and I know it can be tough.
Just try saying things like WHY Afghanistan will spiral into sectarian violence if X or Y occurs, instead of just repeating the CNN line. Maybe read the argumentation on the side of those who wanted to get into Iraq and offer some kind of intelligent comment on WHY they are wrong, instead of just saying it is so.
If you just say it is so because you wrote it; the natural question is who the hell are you? Hence, the question at the beginning of this comment.