Fruits & Nuts In The Garden State 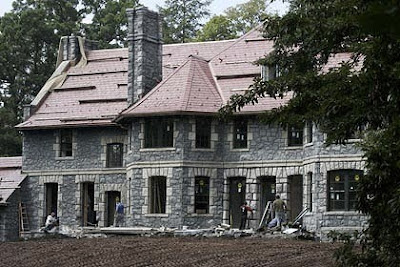 Libyan embassy has owned this Englewood mansion since 1982

If you've ever been to Englewood, then the kerfuffle between residents of the New York City suburb on the New Jersey side of the George Washington Bridge and

This is because Englewood, while looking like a typical Garden State suburb, albeit with a really big bridge on its eastern edge, has long been a bastion of inclusiveness with a racially, ethnically and politically diverse population.

That has not prevent Englewooders (Englewoodians?) from pitching a bitch over 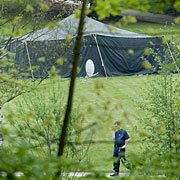 Khadafy's (Gaddafi's?) announced plans to pitch his air-conditioned Bedouin tent (left) on the lawn of a mansion the North African state owns while he makes a horse's ass of himself at the U.N. General Assembly meeting next month in the Big Apple. A request to camp out in Central Park apparently was rejected.

The comic aspect of the standoff quickly fades when you consider that the Tyrant of Tripoli is a virulent anti-Semite and Englewood has a sizable Jewish population.

Meanwhile, the dictator gave Abdelbaset al-Megrahi (below, right), the sole Libyan imprisoned for the Pan Am Flight 103 bombing over Lockerbie a hero's 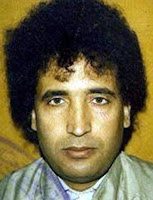 welcome last week after his release from a Scottish prison because the poor baby is terminally ill. Some 33 of the 259 people who perished aboard Flight 103 were from New Jersey.

Mayor Michael Wildes says that Englewood "is a community that will never forget acts of terrorism." He will lead a protest rally outside the Libyan property on Sunday.

The house next door is Rabbi Smuley Boteach's, who makes it clear that "We don't want a terrorist funder and lover in our midst.''