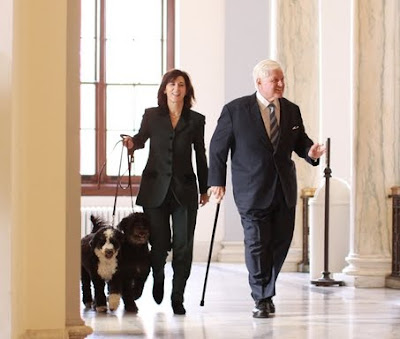 If you, like me, realized how little you knew about Ted Kennedy's second wife when he left this mortal coil on Tuesday night but were aware of the miracles that Victoria Anne Reggie Kennedy worked on his life, you're pretty much out of luck beyond brief accounts of how they fell in love and wed in 1992.

But buried deep in a multi-part Boston Globe profile of the Lion of the Senate by Joseph P. Kahn published earlier this year were some meaty details.

By the late 1960s, Kennedy's reputation for heavy drinking and womanizing was well established. He provided plenty more to gossip about as he moved into middle age, not always gracefully, during his second bachelorhood in the 1980s and 90s.

It was not just his yo-yoing weight and blotchy complexion that raised questions about how he lived his life. Kennedy possessed movie-star wealth and celebrity. A bachelor since his divorce in 1982, he was also a man of his generation, embracing the swinging Playboy ethos of the 1960s as ardently as he did the New Frontier spirit.

Since Chappaquiddick, Kennedy had been largely able to keep his public and private lives separate. More and more, though, his worst excesses were spilling into public

The year of 1991 transformed Kennedy's life, thanks in part to a June party celebrating Edmund and Doris Reggie's 40th wedding anniversary.

The Reggies were old, cherished friends who had supported Kennedy during bad times and good. A retired Louisiana judge and banker, Edmund had Kennedy ties dating to 1956, when he had marshaled Louisiana Democrats to support Jack's vice-presidential bid. . . .

If the bond between the two families was built on politics, though, it had grown over the years into something deeper. The Reggies were Lebanese-Americans with Deep South roots. The Kennedys were Irish-Catholic Northeasterners. Their superficial differences notwithstanding, the Reggies and their six children had more than a little 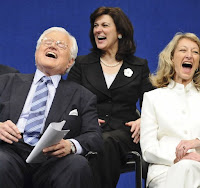 The party took place at the Washington home of Vicki Reggie, 37, the couple's second-oldest child. Two decades younger than Kennedy, she came from a different generation, a different place in life. Although she had interned one summer in Kennedy's Washington office, the two barely knew each other, having shared only a brief conversation and photo-op.

Divorced in 1990, Vicki Reggie was no fixture on the Beltway social circuit. Juggling single motherhood and a demanding career precluded having much of a dating life. She had also been named a partner at her firm, combining what colleagues say was an ability to master complex financial transactions with a high degree of emotional intelligence.

Kennedy quickly realized many of the qualities that made her an outstanding lawyer -- sharp elbows combined with an even sharper wit -- when he rang the doorbell for the anniversary party. "What's the matter," she said, smiling at the senator, "you couldn't get a date?" He followed her into the kitchen while she made dinner and asked her out a few days later. More social than romantic at first, their meetings gradually deepened into a mutual affection that took both of them by surprise.

What made Vicki different from the scores of other "dates" Kennedy had pursued? She was youthful and attractive: 5-feet-8 with hazel eyes and a sophisticated air. Intelligent, politically savvy, a lover of opera and pro football, an accomplished cook. More significantly, perhaps, she was raising two children, aged 5 and 8, who were

central to her life. For all his middle-aged roistering, Kennedy loved children and never seemed happier than when surrounded by them.

"His life was going in a very different direction when they met, then it all came together afterward," says Heather Campion, a longtime Kennedy friend. "Vicki made Ted Kennedy much more accessible to us than he'd been before. None of us had ever seen or known him that way, as a family man, a romantic man."

Unlike Joan and other wives of Kennedy men, Vicki shared his political interests, enabling her to serve as partner -- and troubleshooter -- in all aspects of his life

After they had been dating for a few weeks, the senator was stuck on Capitol Hill and could not make it to her house for dinner, where he would often help with the children's homework and read them bedtime stories. At that moment, she later said, 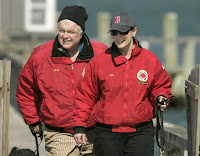 "I started to realize more and more that this man was very important in my life."

After they had married, Vicki was asked whether Kennedy's reputation for womanizing had given her pause.

"I know him," she said. "I know the tremendous respect he has for me, and for his daughters, and for his mother. I think that says it all."

Edmund and Doris Reggie were on Nantucket that December when the senator sailed over to ask their permission for him to marry their daughter. They happily said yes. In January, the senator formally proposed at a performance of "La Boheme," Vicki's favorite opera. They married in a civil ceremony that July at Kennedy's house in

Virginia. The news stunned many who had taken Kennedy at his word that he would never marry again, raising suspicions that he was only doing so for political reasons.

"Let me put it this way," says Edmund Reggie. "We all know people who fall in love, marry, and a few years later become two different people. After 16 years of marriage, Ted and Vicki are closer and more romantic than they were after five years. It's impressive."