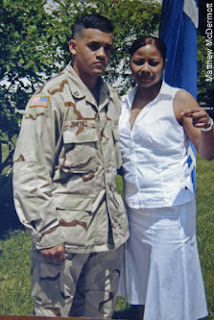 If some conservatives have their way, Alex Jimenez will become to an expanded domestic-spying program what Graeme Frost became to the expanded S-CHIP program: A human face on a contentious political issue.

Frost, of course, is the 12-year-old who gave a Democratic Party radio rebuttal to President Bush’s veto of a bill to expand the State Children’s Health Insurance Program that had passed Congress with broad bipartisan support.

Before you could say "Michelle Malkin," conservative and right-wing bloggers and talk-show blatherers were dumping all over the Frost family because Graeme and sister Gemma were eligible for the Maryland version of S-CHIP even though they were card-carrying members of the middle class.

Jimenez, on the other hand, was kidnapped along with two fellow troopers by Al Qaeda insurgents in 's Triangle of Death in May and almost certainly was executed.

Jimenez was much in the news after he went missing because of his wife, Yaderlin, who like him is a native of the Dominican Republic but entered the U.S. illegally prior to marrying the Army specialist and naturalized citizen in 2004. Yaderlin had been slated for deportation because she had not applied for a green card, but can stay in the because an immigration lawyer who had the support of the Army intervened in her behalf and she was granted a card.

Well, Jimenez is now back in the news -- at least in The New York Post and on Faux News, it's identical TV twin, because of claims that intelligence officials apparently got bogged down for nearly 10 hours seeking approval to use wiretaps against the terrorists suspected of kidnapping he and the other men.

I say apparently because The Post, which never misses an opportunity to grind its political ax on its news pages, noted before even providing details of what happened to Jimenez that Congress plans to vote on a bill this week that leaves in place legal hurdles in the Foreign Intelligence Surveillance Act (FISA). These apparently include the need to get permission before a cell phone conversation between two people in is monitored because those communications typically are routed through hubs.

The Post, of course, is dead set against any hurdles and safeguards and wants the government's powers to spy on its citizens to be expanded.

The newspaper says that a search to try to rescue the men was quickly launched, but soon bogged down because lawyers abiding by the FISA law were told that special approval from the attorney general would be required first.

"For an excruciating nine hours and 38 minutes, searchers in waited as lawyers discussed legal issues and hammered out the 'probable cause' necessary for the attorney general to grant such ‘emergency’ permission.

"Finally, approval was granted and, at that night, surveillance began.

" 'The intelligence community was forced to abandon our soldiers because of the law,' a senior congressional staffer with access to the classified case told The Post. 'How many lawyers does it take to rescue our soldiers?' he asked. 'It should be zero. ' "

It would be nice to think had there not been a delay that Jimenez and his colleagues would have been located and rescued, but that is assuming an awful lot since the ambush and abduction occurred in a hotbed of insurgent activity where the lay of the land made a search very difficult and the locals were extremely uncooperative, two salient factors that The Post of course does not take into consideration in its rush to judgment.

Meanwhile, Think Progress makes a convincing case that unnecessary red tape and the incompetence of Alberto Gonzalez' Justice Department are to blame.

Can't exceptions to the FISA rule be made in extraordinary emergencies like this? Of course they can – and the The Post doth protest too much in wanting to strip the bill of all protections.

Verizon, for one, seems quite willing to make exceptions: A Congressional committee was told this week that the telecom giant has provided customers' telephone records to federal authorities in emergency cases without court orders hundreds of times since 2005, in addition to the thousands obtained through subpoenas and court orders.

While young Frost and his family were skewered unmercifully in what has passed for an S-CHIP debate, don't expect liberals and other opponents of the FISA expansion to try to even lay a finger on Jimenez.

He had as little to do with FISA as Frost had to do with S-CHIP. Not that that mattered to Malkin and her fellow swiftboaters.

Posted by Shaun Mullen at 6:22 AM
Email ThisBlogThis!Share to TwitterShare to FacebookShare to Pinterest