SoCal & 'The Weather of Catastrophe' 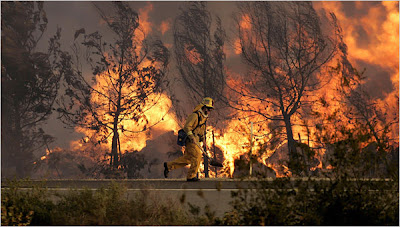 The great novelist and essayist Joan Didion from her classic Slouching Toward Bethlehem on the Santa Ana Winds that are driving the catastrophic Southern California fires:

"We know it because we feel it. The baby frets. The maid sulks. . . . The heat was surreal. The sky had a yellow cast, the kind of light sometimes called 'earthquake weather.' My only neighbor would not come out of her house for days. . . . In Los Angeles some teachers do not attempt to conduct formal classes during a , because the children become unmanageable.

" . . . It is hard for people who have not lived in Los Angeles to realize how radically the Santa Ana figures in the local imagination. . . . Los Angeles weather is the weather of catastrophe, of apocalypse, and, just as the reliably long and bitter winters of New England determine the way life is lived there, so the violence and the unpredictability of the Santa Ana affect the entire quality of life in Los Angeles, accentuate its impermanence, its unreliability. The winds shows us how close to the edge we are."

Hat tip to Kevin Drum at The Political Animal
Photos by L.A. Times (top) and Orange County Register
Posted by Shaun Mullen at 1:06 PM
Email ThisBlogThis!Share to TwitterShare to FacebookShare to Pinterest