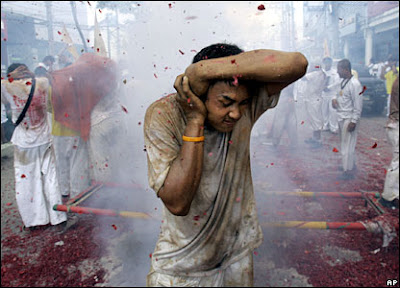 A participant in Thai festival covers his ears as fireworks explode

What is it about [Al] Gore that drives right-wingers insane?

Partly it's a reaction to what happened in 2000, when the American people chose Mr. Gore but his opponent somehow ended up in the White House. Both the personality cult the right tried to build around President Bush and the often hysterical denigration of Mr. Gore were, I believe, largely motivated by the desire to expunge the stain of illegitimacy from the Bush administration.

And now that Mr. Bush has proved himself utterly the wrong man for the job — to be, in fact, the best president Al Qaedas recruiters could have hoped for — the symptoms of Gore derangement syndrome have grown even more extreme.

The worst thing about Mr. Gore, from the conservative point of view, is that he keeps being right. . . .

[But] the biggest reason the right hates Mr. Gore: In his case the smear campaign has failed. He's taken everything they could throw at him, and emerged more respected, and more credible, than ever. And it drives them crazy.

Al Gore's fans are dreaming if they actually believe that he will choose, at this late date in the campaign calendar, to parlay his Nobel Prize into another White House bid. Notwithstanding the requisite buzz, he doesn’t need that kind of grief. . . .

It would appear, therefore, that Gore's best option is to continue to lead his current life, with the expectation that he would play a strong educational role in any ’09 Democratic administration. Given the traumas that he was forced to endure seven years ago, that’s not such a bad deal.

The left doesn’t want to discuss what we lose when government steps in where the citizen is capable of taking care of themselves. They refuse to acknowledge that every step toward establishing a government giving the people what they want rather than what is needed or desirable is a step back from human liberty and into the trough of virtual slavery.

You can hardly blame liberals in the end. It is extremely seductive (not to mention conducive to winning elections) to promise people that government will relieve the citizen of their burdens and make their lives easier. It is also convenient to then tar your opponents as unfeeling, uncaring monsters. Playing Santa Claus while painting the opposition as Scrooge has been part and parcel of the Democratic electoral game plan since the 1960’s.

I was very proud of my association with Mitt Romney. I'd worked hard for him here in the state. I was a co-chair of his campaign on Capitol Hill. And he not only threw me under his campaign bus, he backed up and ran over me again

A comprehensive global study of abortion has concluded that abortion rates are similar in countries where it is legal and those where it is not, suggesting that outlawing the procedure does little to deter women seeking it.

There’s a timeless American Rorschach, a set of ideas meant to have symmetry. They’re called Civil Liberties: originally meaning that we be subject only to laws established for the good of the community… and… and that our individual rights be protected by law from unjust government. Too often an balancing act made to go awry in our times, for certain.

But there is a group of people who surely deserve to be protected from unjust standards in weighing their alleged crimes and sentencings: The mentally unstable, the severely addicted, and those defendants who have ‘retardation.’

Often, the best way to keep justice just is to just question justice.

The switch has been thrown on a telescope specifically designed to seek out alien life.

Funded by Microsoft co-founder Paul Allen, the finished array will have 350 six-metre antennas and will be one of the world's largest.

The Allen Telescope Array (ATA) will be able to sweep more than one million star systems for radio signals generated by intelligent beings.

Its creators hope it will help spot definite signs of alien life by 2025.

We live in a society where being called the "independent type" is considered the greatest of compliments and "co-dependency" an ugly slur suggesting couples who are too weak or pathetic to break away from each other's cycles of negativity.

As I have posted previously, there is a third, oft-ignored whistle stop on this branch line of human development which may seem like a step-backwards to those "independent types" but is in fact a grand leap up on the scale of humanity: interdependence.

Interdependence is defined as "a dynamic of being mutually responsible to and sharing a common set of principles with others" and it's a concept that has been written about and lauded by people as diverse as Mahatma Gandhi, Martin Luther King Jr and environmentalist David Suzuki.