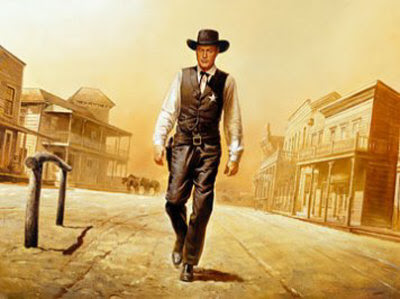 In the President's favorite movie, the righteous hero stands alone and guns down the bad guys. Bush has played Gary Cooper in the showdowns over , and now he is facing down the villains in the S-CHIP fight.

But Bush has modeled himself on the wrong 1950s western. True to and , "High Noon" is more about pride and calculation than humanity. Those who care about people rather than power have always preferred "Shane."

At the end of "High Noon," the hero, after gunning down the bad guys, converting his Quaker wife to killing and showing his contempt for everyone else, rides off with Grace Kelly to some denied other mortals, all as a reward for his concept of manhood.

In "Shane," a retired gunfighter reluctantly takes up arms again to protect a family he loves and their hard-working community against ruthless power. His reward is to ride off to die, alone.

That’s a concept that the man who the former President of Mexico calls a "windshield cowboy" fails to understand.

PUR water wasn't content with removing impurities from your water so they decided that they would put some back in . . . and then charge you for it!

Given the political climate, it would appear the religious right movement is at a crossroads. Whereas its political power and influence were once unquestioned, there’s ample reason to believe these groups, leaders, and activists may soon be an afterthought on the landscape.

Key religious leaders have died recently (Jerry Falwell, D. James Kennedy), some major groups have nearly disappeared (Christian Coalition), the movement’s legislative agenda is rejected by Dems and ignored by the GOP, and several of the leading Republican presidential hopefuls are anything but friendly with the movement.

Will the movement splinter? Fade away? Rebound? One thing’s for sure — the religious right’s problems do not include financial trouble.

The Bush administration again has appointed a chief of family planning programs at the Department of Health and Human Services who has been critical of contraception.

Susan Orr, most recently an associate commissioner in the Administration for Children and Families, was appointed Monday to be acting deputy assistant secretary for population affairs. She will oversee $283 million in annual grants to provide low-income families and others with contraceptive services, counseling and preventive screenings.

Despite grumbling from lawmakers who want a permanent ban, the House has voted overwhelmingly to extend for four more years a moratorium on taxation of Internet access.

The bill (HR 3678) passed 405-2. The existing ban on Internet access taxes will expire Nov. 1 unless Congress extends it by that date.

Although supporters of making the ban permanent had enough votes to amend the bill to their liking, Democratic leaders put it on the floor under suspension of the rules, a procedure that bars amendments and is usually reserved for less controversial legislation.

In Saturday's story about the Hardly Strictly Bluegrass Festival, the sexual orientation of the Whoreshoes was misstated. Only vocalist Lala Hulse is a lesbian. The other members of the all-female band are heterosexual.