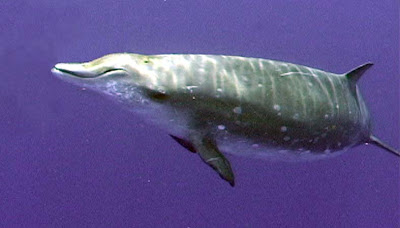 The Navy has funded a $6 million project to learn more about
beaked whales and their response to sonar and other noises.
The study will take at least two years, during which our Navy—and the Russian and Chinese navies, too, among others—will continue to drive many of these sublime, highly intelligent animals to their deaths. And, no matter what the findings, it does not seem likely that the Navy will go all PETA on us and decide to get along without its way cool gadgets.

Any real solution would have to be international, involving some serious diplomacy aimed at a new kind of arms control. The cat-and-mouse games played by submarines may have made a certain kind of sense during the Cold War, but what is the point of them now? is annoying, but it is no longer our mortal enemy. The Chinese have no desire to bury us, except under piles of sneakers and kitchen appliances. Al Qaeda’s navy, as the Cole incident showed, consists of the odd motorboat. The terrorists have no submarines. Perhaps the immense sums still spent on naval toys whose strategic rationale is obsolete could be redirected to teaching the relevant personnel, humans and dolphins alike, to speak Arabic.

Since 9/11, we have created an ever more ridiculous system of airport security. No shoes. Little tubes of toothpaste and other gels or liquids in their own separate platic bag. Laptops, digital camcorders, Playstations, and what have you out of their case. IDs out of their wallet. It’s slow, cumbersome, and often embarrassing. But here’s the clincher: It doesn't work.

The senators are in Gonzales recovery and they will go for anything just short of lying, forgetting, and stonewalling. Sen. Russ Feingold, D-Wisc., asks some of the day's best questions. But then comes the smooch: "I don't agree with everything you say, but I will certainly say that this is a much more responsive nominee than the previous witness." Everything is relative: [Michael] Mukasey speaks in the ringing yet calm tones of the supremely confident trial judge he was until his recent retirement. He doesn't say black is white. And so he's gold. It doesn't matter that the senators have gained few, if any, concrete assurances about indefinite detention, warrantless surveillance, or torture, in the usual meaning of the word.

Chris Dodd stood up to defend the Constitution and the rule of law yesterday and Harry "Dirty Tricks" Reid kicked him to the curb by refusing to honor Dodd's hold. I don't think it could be any clearer that Reid needs to go. The hapless putz has been whining since he took the leadership about how the GOP is blocking progress, and blathering about the impossibility of overcoming the immutable 60 vote blockade and then when Dodd steps in to show him how it's done, he slaps one of his own in the face? He's allowed the GOP to hold up bills with the very same procedure. It's beyond inexcusable. Harry's loyalties are painfully apparent. He's firmly lodged in the deep pockets of his corporate benefactors.

After the North Koreans, the British are probably the most highly surveyed people in the world. Around 10,000 publicly funded closed-circuit television (CCTV) cameras—to say nothing of the private ones—watch London every day. The average Briton, you often hear, winds up photographed 300 times a day as he goes about his business, even if his business is crime.

Whenever a brutal murder is committed in a public place, the police announce that they are examining the video evidence: no such murder ever seems to occur off camera. Yet the number of CCTV cameras in place seems to have no effect on the number of crimes solved—the police in the London boroughs with many cameras, for instance, clear up no larger a proportion of crimes than those in boroughs with few.

A recent study demonstrating this failure to improve the clear-up rate, however, could not also show that the cameras failed to deter crime in the first place. Common sense suggests that they should deter, but common sense might be wrong. For if the punishment of detected crime is insufficient to deter, there is no reason why the presence of cameras should deter.