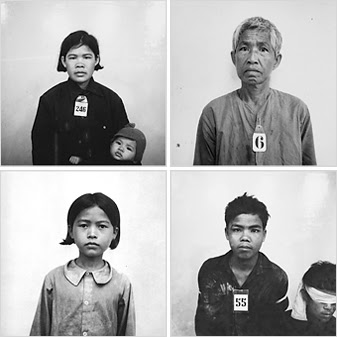 He had a job to do, and he did it supremely well, under threat of death, within earshot of screams of torture: methodically photographing Khmer Rouge prisoners and producing a haunting collection of mug shots that has become the visual symbol of ’s mass killings.

"I’m just a photographer; I don’t know anything," he said he told the newly arrived prisoners as he removed their blindfolds and adjusted the angles of their heads. But he knew, as they did not, that every one of them would be killed.

"I had my job, and I had to take care of my job," he said in a recent interview. "Each of us had our own responsibilities. I wasn’t allowed to speak with prisoners."

That was three decades ago, when the photographer, Nhem En, now 47, was on the staff of Tuol Sleng prison, the most notorious torture house of the Khmer Rouge regime, which caused the deaths of 1.7 million people from 1975 to 1979.

This week he was called to be a witness at a coming trial of Khmer Rouge leaders, including his commandant at the prison, Kaing Geuk Eav, known as Duch, who has been arrested and charged with crimes against humanity.

The trial is still months away, but prosecutors are interviewing witnesses, reviewing tens of thousands of pages of documents and making arrests.

As a lower-ranking cadre at the time, Mr. Nhem En is not in jeopardy of arrest. But he is in a position to offer some of the most personal testimony at the trial about the man he worked under for three years.

[I]s it the remote villagers of southeastern that pose a grave security threat to those of us living in the West? Is the perennial weaning away of Pashtun tribes from neo-Taliban influences a vital national security interest of ’s? Or getting Sunni tribes in to work with the central Shi’a led government in ? Or propping up Dawa or SCIRI in , against Sadr’s men? Put differently, how did the attack on downtown Manhattan lead us to become involved in ostensibly decades long nation building efforts in Afghanistan and Iraq, and perhaps to come, a bombing campaign that would likely lead to a full-blown conflict with the Islamic Republic of Iran?

In my view, the greatest threat we face in the post 9/11 era are radicalized Islamists of mostly lower to middle class background who have grown up or emigrated to cities like Madrid, London, Paris, Hamburg, Milan. Don’t get me wrong. The comical shrieking about "Eurabia" and such is but thinly veiled Islam-bashing by primitives in the know-nothing media. But this moronic hyperbole aside, the radical Islamists who threaten us the most are those who have become technologically sophisticated, who perhaps speak our language, who can more easily appear "Westernized", and meantime have become highly alienated by the West, basically the Mohammed Atta type. Which is to say, not rural peasants in the environs of or impoverished Shi'a slum-dwellers south of (nation-building efforts are not required to destroy any potential al-Qaeda sanctuaries, rather targeted military and intelligence efforts, and regardless the biggest such sanctuary is currently located within our ally 's territory).

We're not about to be pushed around by just anybody. Oh sure, we'll let the Chinese get away with economic, environmental and human rights violations (after all, what's shoddy merchandise, massive pollution and slave labor in exchange for ... I forget, what do we get out of this) without doing much more than chiding them from afar or meeting with the Dalai Lama. But when it comes to the dreaded presence of a Communist state that is smaller than 's pinky toe, and which has the international reach of a Tic-Tac, we stand firm!

So it's with relief I heard that Bush has reaffirmed our embargo against .

For the Bush Doctrine to survive Bush, it will have to incorporate all we have learned since he formulated it. Much of it comes down to this: the Middle East is not Europe, is not , and is not . (They are not either.) The road to hell is paved with bad analogies, which are no substitute for lived experience and specific knowledge. According to the Greek poet Archilochus, "the fox knows many things, but the hedgehog knows one big thing." The hedgehogs have taken the Bush Doctrine as far as they can. Now it is the turn of the foxes.

Posted by Shaun Mullen at 4:36 AM
Email ThisBlogThis!Share to TwitterShare to FacebookShare to Pinterest