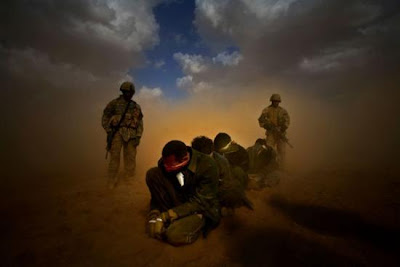 A SCENE FROM TAXI TO THE DARK SIDE
Coming to a theater near you just in time for the holidays: Movies about Americans acting badly.

Film makers are on a roll these days with movies like Taxi to the Dark Side, Rendition and Redacted. All have gotten generally good reviews at screenings but won't compete with forthcoming biggies like a remake of Revenge of the Nerds and will raise the usual howls of protest that Hollyweird is run by America-loathing liberals, Clint Eastwood excepted, of course.

The story of a young taxi driver in falsely accused of being a terrorist provides the framework for Taxi to the Dark Side, a documentary examination of torture policies.

Rendition is the story of an Egyptian born terrorism suspect who disappears on a flight from to Washington and CIA a analyst who is forced to question his assignment in an attempt to save thousands as he becomes a party to the torture of the Egyptian.

And veteran director Brian De Palma offers a montage of stories about soldiers in in Redacted, a docudrama that focuses on the gang rape-murder of Abeer Qasim Hamza al-Janabi and killing of her family in Mahmoudiyah in March 2006, an outrage that I have blogged about at length.