Bob and George Go One on One 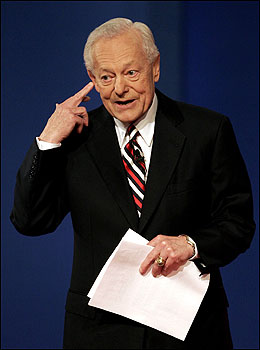 Television network news has taken a beating in recent years and increasingly resembles a vestigal organ. It used to be good for something, but I'm not sure what.

There are all the 24/7 cable competitors, the Internet and now the proliferation of blogs, many of which draw impressively large numbers of visitors disaffected with what they see and hear -- or pissed off because of what they don't see and hear and think they should -- on the traditional ABC, CBS and NBC evening news programs.

I have to admit that I also give those shows little notice these days. If I'm ensconsed at Kiko's House when the evening news programs come on, I'll surf from network to network and then on to the BBC World News to see what the top stories are, all the while listening to Internet radio or a music CD.

So when the CBS Evening News headlined an exclusive Bob Schieffer interview with President Bush last night, I rolled my eyes. Could this really be the most important story out there? I surfed on to the Beeb and then "Seinfeld" and "The Simpsons" reruns while listening to Mozart, who had a pretty big birthday yesterday, the Big Two Five Oh, to be exact.

But I felt a tinge of guilt this morning. What if Schieffer, one of the few surviving members of the old network TV news guard and a fine and emminently fair journalist (as opposed to what the Brits call a "news reader") had asked some good questions? What if Bush had said some good things?

So off I went to find and read the transcriptof the interview. I urge you to do so, too. You can certainly reach your own conclusions, but for me what the president had to say (when not fumbling for the right words, which he did repeatedly) goes a long way to explaining why his popularity has steadily eroded and why the problems that America faces at home and abroad seem so intractible for the want, in large part, of better leadership.

* * * *
The interview also is a nice lead-in to posts by yours truly and Country Bumpkin on the president's forthcoming State of the Union speech. Look for them.
Posted by Shaun Mullen at 10:40 AM
Email ThisBlogThis!Share to TwitterShare to FacebookShare to Pinterest