Politix Update: Don't Let The Tollgate Hit You In The Ass On The Way Out, Christie 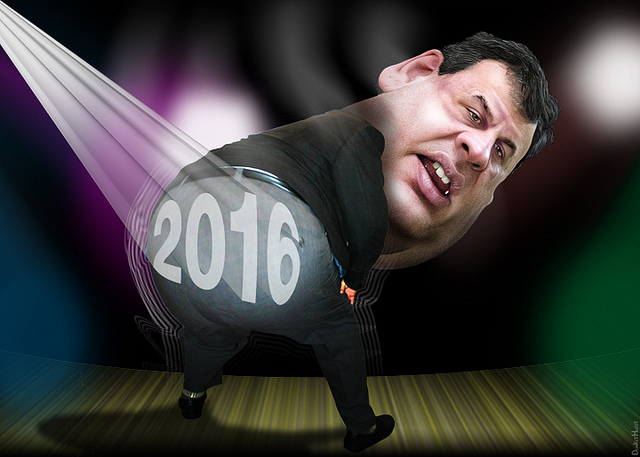 In today's toxic political environment, candidates routinely lie, shape shift on the issues, rewrite their résumés, project an aura of inevitability, play the fear card and act the demagogue when not kissing babies.  What made Chris Christie special was that he did all of that -- and more --  and it doomed his presidential campaign from the start.

We have watched Christie's flirtation with the big time with more than casual interest, and lustily cheered the news on Wednesday, the day after the New Hampshire Republican primary, that he was suspending his campaign after a dismal sixth-place finish.  (Good riddance to that Carly Florina, too.)

The mountain retreat is only a couple, three miles from the Garden State, which is an idiosyncratic liberal bastion, not to mention kind of schizophrenic being sandwiched between Philadelphia and New York, and all.   The Dear Friend & Conscience works there, we often shop there and take advantage of its ridiculously low gas prices, and it is where Christie has wrought enormous damage as its governor for the last six years.

New Jersey is hands down the most corrupt state in the union, with politicians seldom out of the news for all the wrong reasons.  (Move over Louisiana, you're bush league by comparison.)  So when Christie vaulted from being a tough-on-crime-and-corruption U.S. attorney in Newark to the Statehouse in Trenton, we knew that it would be only a matter of time before he became mired in a Superfund site-sized cesspool of politics and the attendant intrigue, and his squeaky-clean image would become tarnished.

How wrong we were.  This is because Christie brought to the job a predilection for playing dirty that was awesome even by New Jersey standards, and in one and a half terms he has proven to be the most corrupt and ethically challenged denizen of the Garden State since Richard "Iceman" Kuklinski.  (You can look it up.)

Christie's reputation for profligate spending as a U.S. attorney carried over to the governor's mansion, and as if to emphasize his selfishness at a time when the Garden State was descending into fiscal crisis, he arrived at his son's baseball game in May 2011 aboard a spanking new $12.5 million State Police helicopter, which landed in an adjacent football field. Christie disembarked from the helicopter and got into a black car with tinted windows and was driven about 100 yards to be baseball field.

Early in his first term, Christie began talking up what a swell alternative he would be to the off-the-rack conservatives who were driving the Republican Party even deeper into the national electoral wilderness.

Christie graciously refused to run for president in 2012 and said he would bide his time. (Actually, he knew he didn't have a woodchuck's chance in a Pine Barrens wildfire to be nominated, let alone elected.)

He led some Republican primary race polls in 2013 and 2014 on the strength of his tough-guy image, and so he waddled onto the national stage last spring and set about burnishing that image with statements like "If you’re ready to start offending people in order to achieve a greater goal, you’ve found the right guy.  I'm here to help offend people with you."

But prospective voters on the stump were underwhelmed by Christie, his seamy past (and present) kept catching up to him, and he got blindsided by Donald Trump.

While Christie fit right into the culture of corruption in New Jersey, he was a tough fit for the GOP as a presidential contender from the start.  New Jersey is perhaps the most liberal state of all, and while Christie has tried to squeeze into conservative mufti as he sold himself in Iowa, New Hampshire and elsewhere, it didn't work and his past policy positions opposing the gun lobby and supporting gay rights didn't pass the Republican litmus test, he believed in human-made climate change before he didn't, he expanded New Jersey Medicaid coverage under the evil Affordable Care Act, while he had the temerity to appoint a Muslim, for cryin' out loud, to a state court judgeship.

In 2010, Christie singlehandedly killed a planned $8.7 billion commuter train tunnel under the Hudson River that virtually everyone else believed would ensure the future health of the New York region's economy.  Christie argued that it was just too damned expensive for the frugal times in which he governed, an argument that held little water then and eventually sprang a ginormous leak.

This is because it turns out that Christie planned all along to use New Jersey's share of tunnel construction dough to bail out the state's highway and bridge system, which under his "leadership" had been driven deeply into debt.

This "chop shop option," as one columnist aptly termed it, is paying for, among other things, the $1 billion reconstruction of the Pulaski Skyway, the heavily traveled main connector for the Holland Tunnel and an 83-year-old bucket of rust in such bad shape that nets had been installed to catch falling debris.

There was just one problem with Christie's secret scheme: The unspent tunnel money is under the control of the Port Authority of New York and New Jersey, much in the news during the last couple of years because the governor has used it as a patronage trough and personal piggy bank.  By law, the authority can only fund roads leading to the GW Bridge and Lincoln Tunnel, but Christie got around that inconvenience by browbeating the authority's lawyers into asserting that the Pulaski Skyway is an "access road" to the Lincoln Tunnel, which is about as far from the truth as Trenton is from Kiev.

This is not to say that the governor had other options. The logical one would have been to raise New Jersey’s gas tax, which is the second lowest in the nation. Even a one-penny increase would raise about $50 million.  You can do the rest of the math -- and repair a lot of broken bridges and roads.

Christie might as well have made one of those bright orange traffic cones his campaign symbol because the long-running fallout from the Bridgegate scandal keeps churning up victims.

There are, of course, the folks under federal indictment for the public safety mess resulting from the closing of several lanes leading to the George Washington Bridge in Fort Lee in September 2013 in retaliation for the mayor of that fair burg not backing Christie in his re-election bid.  There also is a parallel lawsuit against his administration.  Then there are the two United Airlines execs who were axed after being caught in a Bridgegate tentacle, the failure of a New Jersey state lottery privatization scheme that benefited Christie cronies, including a Bridgegate person of interest who screwed the pooch in the United flap, and the sudden dismissal of Christie's transportation chief, who had been gifted the job by Christie although he was a walking conflict of interest, including being a top lobbyist for the airline.  And we're just scratching the surface here.

He claimed on Face the Nation that Hillary Clinton was "unaccountable" because she left the Benghazi compound's security arrangements to lower-ranking State Department professionals.  Host John Dickerson then pointed out that Christie gave a similar explanation to try to exonerate himself in Bridgegate.   Oops!

Meanwhile, Christie's bullying and intemperance -- shouting down citizens at town hall meetings, declaring that public school teachers are worthless slugs, screaming "Keep walking, keep walking!" when he was stopped by a man on a Jersey shore boardwalk who wanted to talk about his lousy response to Superstorm Sandy  -- was seen as an asset when he first announced his candidacy.  But it became an obstacle because Christie is unable to control himself.

Christie was kicked out of an Amtrak quiet car en route to New Jersey from Washington in October when he yelled at his bodyguards, ignored requests for him to tone it down, and then, with a strawberry smoothie in one hand and a cell phone in the other, bellowed into the phone.

Occasionally in politics, ego-driven windbags who have created auras of inevitability around themselves fall to earth.  Their balloons burst, the wheels come off their wagon, the wind goes out of their sails.  But they are the last people in the room to get the joke, so evidentually fraudulent that they think they're wearing a custom-tailored twill suit with a snappy designer necktie when they step to the podium at a rally but people in the audience see an overbearing jerk wearing boxer shorts and a sweat-stained t-shirt several sizes too small with an all-day sucker and not a microphone in their hand.

And so it was with Chris Christie.

Unknown said...
This comment has been removed by a blog administrator.
5:30 AM

Unknown said...
This comment has been removed by a blog administrator.
5:11 AM

Unknown said...
This comment has been removed by a blog administrator.
2:13 AM