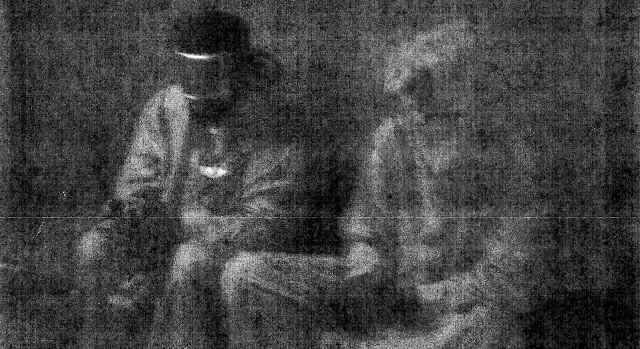 ONE OF THE PHOTOS THE PENTAGON RELUCTANTLY RELEASED

After all these years, the full extent of the Bush Torture Regime still is not known.

The cloak of secrecy thrown around the use of Nazi-like interrogation techniques during those dark days has not been lifted because of shameful foot dragging by the Obama administration and a woefully incomplete accounting by the Senate Intelligence Committee.  Part of the problem is public indifference, as well as the lack of compelling visual evidence -- photographs and videos that capture the horror of the torture inflicted on terror suspects in the name of the world's greatest democracy in the years after the 9/11 attacks in violation of common sense and international law.

The leaked photos of prisoner abuse at Abu Ghraib prison in Baghdad in 2004, which triggered international outrage and prompted the Bush administration to disingenuously characterize the taunting of naked Iraqis by dogs and guards as an isolated incident, were bad enough.  This begins to explain why the Pentagon has reluctantly released a mere 198 of 1,800 photographs gathered during criminal investigations into prisoner mistreatment by troops in Iraq and Afghanistan despite a longstanding lawsuit by the American Civil Liberties Union.

The Pentagon continues to argue, as it did when the suit was filed in 2004 and has since after court decisions validating their release, that dissemination of the photographs could put American troops at risk.  But after so many years -- and so much obfuscation, denial of accountability and disinformation by the military and White House -- their release outweighs that concern.

The 198 photos released the other day mostly show close-ups of body parts, including arms, legs and heads with injuries, as well as wider shots of bound or blindfolded prisoners.  Their selective release obviously was designed to mislead by blunting the impact of the full scope of the torture, which also was carried out by and in conjunction with the CIA and included waterboarding, imprisonment in small boxes, slapping and punching, sleep deprivation, threats that detainees' children would be killed and their mothers sexually assaulted, and forced rectal feeding.

The photographs -- all of them -- belong in the public domain.

"Perhaps the photos will reinvigorate the debate about who should be held accountable for the abuses, and in what way," says Jameel Jaffer, the ACLU's deputy legal director, who did not note that nary a person of consequence -- not one ranking official -- was been punished.

That picture is really very precious and i think they should not release it generally. They should keep their information secret because that can create problem for them. I like to research and read this kind of posts to get points for my dissertation service anyway the theme of this page is really very nice.

The people who authorized the USA use of torture are the same criminals who did 9/11/01 and the October 2001 Anthrax Attacks. These perpetrators even used Ames strain US military nano-weapanonized anthrax on the two then-majority leaders in Congress, Senator Leahy and Thomas Daschle. They sent anthrax letters to others to make it seem random, and some of them died. Machievelli instructed on the use of a “false flag” in The Prince as a way to attack a weaker opponent by claiming that he attacked you first. The theory behind a huge false flag in our times with many deaths is "trauma-based conditioning". Some call it the "Shock Doctrine", the correct notion that the people would not tolerate attacks on their rights in the name of security, nor brutal wars of occupation to de-stabilize Israel's competitors in the Middle East, unless they had been emotionally traumatized and terrorized. The most glaring thing to realize now is that the 9/11 Commission Report of 2004 has had its credibility totally destroyed by the 2015 Senate Torture Report. Why? Because central figures named by the Zelikow cover-up Commission are now named as not having anything to do with Al Qaeda or 9/11 and have been released from Guantanomo Prison! Read Washington's Blog to get the details! Read “Torture Architect Tries to Justify Program … Fails Miserably” By Washington's Blog in Global Research, December 16, 2014. 25% of the footnotes in the 9/11 Commission Report come from torture testimony! Why did dual citizen Philip Zelikow, Assistant National Security Director to Condoleeza Rice get to be Executive Director of a Commission that should have been investigating his own failure to protect us? A Commission that should have been investigating him used torture testimony as its central source of documentation! http://www.globalresearch.ca/torture-architect-tries-to-justify-program-fails-miserably/5420152

Thank you for writing this informative piece on a subject usually dealt with in the most duplicitous and dishonest way by the powers-that-should-not-be and by their corporate "presstitutes" who cover for their crimes. May truth and justice prevail! Here's a song from Berkeley, California activists who regularly protest the perpetrators when they speak or outside their houses and work places. "Tell John Yoo That Torture Is A Crime" – Vic Sadot with the Code Pink Golden Gate Chorus – Truth Troubadour Channel on YouTube! This song was released on 9/11/11 by Vic Sadot on a CD titled “9/11 Truth & Justice Songs”, which is available on CD Baby and Last FM. http://youtu.be/chMrsA97SYI

ninja said...
This comment has been removed by a blog administrator.
10:31 AM