Politix Update: Why The Election Is Now A Battle For All 3 Government Branches 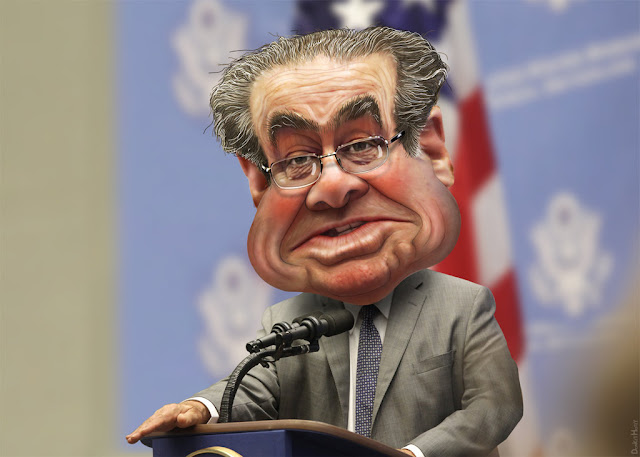 Antonin Scalia was a thug in a black bathrobe.  An avowed conservative when he was appointed to the Supreme Court by President Reagan, Scalia tacked relentlessly to the right over the next 30 years, bringing new meaning to the term judicial activism as he tried to disenfranchise racial minorities, women, the disabled and underprivileged -- succeeding far too often -- in legal decisions that were not merely an assault on the Constitution and human decency, but called into question his very sanity as ideology usually trumped common sense.

Scalia's body was not even cold when Republicans, in a rare moment of unanimity and yet another of partisan pettiness, vowed to paralyze the high court by blocking efforts by Barack Obama to name a successor to the 79-year-old associate justice.

Republicans are fully aware that the president's ability to nominate a third member of the court before his second and final term is over is ginormous and boomerangs the election into a battle royal for all three branches of government.

The GOP has held a majority on the court for nearly a half century, and a Democratic-leaning majority will mean turning the court away from being a de facto arm of the party and begin to return it to its proper place in the balance of powers with the Executive branch and Congress by moderating the slavishly pro-big business and screw everyone else posture that has characterized many of its decisions since John Roberts became chief justice in 2005.

In that very important sense, Obama's third nominee will be more important to the long-term health of the country than who the next president will be, and as legacies go, will fall just below implementation of the Affirmative Care Act in historic importance.   I expect that nominee to be a minority with a constitutional law pedigree like his own.

Mitch McConnell, who vowed to prove Republicans could govern when he became Senate Majority Leader, will of course be obstructionist instead.  "The American people should have a voice in the selection of their next Supreme Court justice," he declared.  "Therefore, this vacancy should not be filled until we have a new president."

Republicans know that they still are screwed if they succeed in keeping Scalia's seat open for any length of time.

It is fully within Obama's purview to nominate a successor and the Republicans' to push back.  They can block any nominee with their 54-seat Senate majority remains, although a supermajority of 6o is needed to clear cloture.   A long fight will roil a party already coming apart at the seams and a Republican presidential race that has become a battle for the party's soul, as well as further alienate the sane majority of the electorate.

Indeed, public opinion might compel the Republicans to do what Obama can't get them to do, especially if the nominee is a judicial moderate.  Which brings up a delicious idea posited by journalist Hugh Cutler, who writes: "Why not Loretta Lynch, then pick a new attorney general from the Justice ranks?  Since the Senate already OK'd her as the nation's top law enforcer, that would put the GOP in a still-tougher spot in denying the confirmation vote."

Presumptive Democratic nominee Hillary Clinton can take the high ground and argue again and again that her brand of politics is not based on obstructionism and resentment.  In any event, a delay in filling Scalia's seat will be pretty much meaningless because she is the probable next president, not a reactionary stooge like Donald Trump or Ted Cruz, and if her coattails are long enough, the Senate and its all-important Judiciary Committee will return to Democratic control.

Meanwhile, the court is faced with the prospect of endless 4-4 ties until the vacancy is filled, and several major cases pertaining to abortion, public employee unions and affirmative action are effectively on hold.  A tie effectively leaves a decision under appeal unchanged, and the court has the option of setting cases for re-argument in the term that begins in October in the hope they can be heard by a full court.

Scalia's brilliance -- even if the word probably was misappropriated in his case -- was widely acknowledged and his lack of self control was legendary.

He was bypassed for chief justice because he shot off his mouth and was prone to racial slurs, wrote few of the divided Roberts court's many 5-4 decisions because of his arcane originalist and textualist views and legally dubious and sometimes cartoonish judgments, and was the reliable fifth vote in vilified rulings including Bush v. Gore and Citizens United.  He was infamous for doubling back on legal principles he previously had endorsed if they got in the way of his increasingly sclerotic views.

Scalia was determinedly opposed to social and political progress in opposing abortion rights, marriage equality, exempting the mentally disabled and younger teenagers from execution in capital cases, the Miranda decision, and perhaps most notoriously, desegregation and voter's rights.

His view on torture was typical of his pretzel logic.  He maintained that the Constitution does not prohibit torture although it prohibits "cruel and unusual punishment," because torture is not a form of judicial punishment.

It should be noted that a recess appointment by Obama may not be outside the realm of possibilities.

President Eisenhower nominated Associate Justice Potter Stewart during an intra-session recess, and he was overwhelmingly confirmed, although in an era when there was considerably less partisan rancor.  The Supreme Court has never been called on to decide the issue.

Great men and women mellow and become gracious with age.  Antonin Scalia did not.  As the great Reverend Gary Davis sang, death don't have no mercy, and Scalia certainly did not.  But perhaps in death we can summon just a little mercy for him despite the enormous damage he wrought to our society in trying to undermine its core values.

I like the piece but methinks Obama's real motivation here is a long long left flank game of rope-a-dope in which history will record that he would have been a much more successful president had it not been for the unrelenting obstructionist policies of the Republicans from day one,culminating in this one last whopper of a defeat much to the detriment of the country, ultimately showing them up for being the true villains as the cause of his tarnished image.

In other words,history will record that Obama was beaten by a bunch of assholes.

Great piece. You summed up Scalia's persona nicely.
Paragraph 10: "her brand of politics is brother than obstructionism and resentment" Broader?

Unknown said...
This comment has been removed by a blog administrator.
9:18 AM

Unknown said...
This comment has been removed by a blog administrator.
5:44 AM

Online Guitar Lessons said...
This comment has been removed by a blog administrator.
2:03 AM