Politix Update: Dear Jeb, It's Time To Say Goodbye To The Nice People 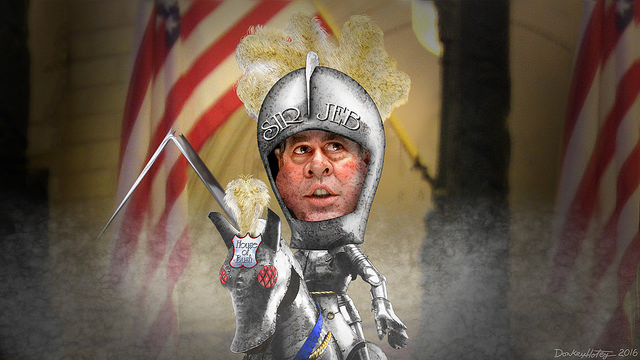 I never thought I'd say that I'll miss Jeb Bush, but he's gonna be gone from the presidential race soon, so I'll get in line to offer my condolences.  And remind him that he should have listened to his mother.

In a typical presidential election year, my hanky wringing would be an acknowledgement that there is sturdier timber still standing in the forest of Republican candidates, but 2016 is anything but typical.  Young Bush's slo-mo crash and burn certainly speaks to his inherent weaknesses as a campaigner, and perhaps as a person, and that the five other leading candidates scored some direct hits in ganging up on him in spending tens of millions in attack ads.  But most of all it is further confirmation that the style of politics that he and his president brother and father represented is out of date.  That is a not bad thing until you consider that it is out of date because of a scumbag like Donald Trump and a weasel like Ted Cruz.

Bush's distant fourth-place finish in the New Hampshire primary yesterday with a measly 11.1 percent of the vote in a state he once was expected to win handily was a death knell for him with Trump grabbing a crushing 35.1 percent, John Kasich 15.9 percent and Cruz 11.6 percent.  Favorite son Bernie Sanders got 60 percent of the vote in the Democratic primary to Hillary Clinton's 38.4 percent.  No surprise there.

John Sununu, a former New Hampshire governor, George H.W. Bush chief of staff and career Republican snark, famously remarked that "Iowa picks corn and New Hampshire picks presidents," but not this year. Trump still is likely to fade and the Democratic deck is rigged to favor Clinton from here on out, who remains on course to become the first woman president if Bubba doesn't find a way to spoil her coronation.

But if New Hampshire belonged to Trump and Sanders, and Kasich became the GOP establishment fave of the moment, the primary may well be best remembered as confirmation that the campaigns of Bush and Marco Rubio, who finished fifth with a measly 10.6 percent, are in big trouble, and Chris Christie, who finished sixth with 7.5 percent, is toast.  The New Jersey governor had put all his eggs in the New Hampshire basket and is set to drop out of the race.

Way back when Donald Trump was just a punch line and not a xenophobic party wrecker, Republican leaders had planned to avoid a long and costly primary fight, but that is exactly what they have gotten as the so-called establishment candidates have beaten up on each other something awful.  Kasich, Bush, Rubio and Christie split 45 percent of the New Hampshire vote while getting only five of the state’s 15 delegates.

Cruz's third place finish had to be especially galling to the Floridians.  Cruz spent a measly $600,000 in New Hampshire yet finished ahead of Bush, who along with his super PAC, spent an astonishing $36 million, including $16 million attacking Rubio by Rubio campaign estimates, while Rubio spent $15 million.  That is serious coinage, and might as well have been thrown into the Merrimack River.

New Hampshire may indeed have been Bush's last harrumph.  Or perhaps the South Carolina primary on February 20 will be, but he is quickly running out of last chances, not to say money.

In speech at a town hall meeting in New Hampshire last week, Bush failed to get applause when he promised that "I won't be out here blow-harding, talking a big game without backing it up," a reference to Trump.

"Please clap," he begged the audience.  They finally did.

Bush held another town hall two days later with his mother, Bar Code Babs, who didn't think he should have run in the first place.  There was applause, but it was unclear whether it was for the son or the 90-year-old former First Lady, who won my lasting admiration when Poppy ran for re-election in 1992 and they are said to have stared in marvel at a grocery store scanner, which became a liberal metaphor for their inability to sympathize with the day-to-day lives of average Americans.

Young Bush may have experienced similar difficulties in making the transition from mediocre Florida governor to hapless presidential wannabe, but at least he has had the balls to call out Trump for his frighteningly wrongheaded ideas.  And was castrated by the gadzillionaire reality show host in return.

END OF AN ERROR

For me, the turning point of the Jeb Bush campaign came way back in mid October when Donald Trump noted in yet another example of the hackles-raising political theater characteristic of the Republican race that George W. Bush happened to be president at the time of the 9/11 attacks, breaking a longstanding taboo in stating the obvious and luring Jeb out on a limb on which he sawed mightily away and never returned from.

"When you talk about George Bush, I mean, say what you want, the World Trade Center came down during his time," Trump noted.  "He was president, okay?"

An outraged Jeb Bush sought to shift blame to Bill Clinton, who was not president at the time, and asserted that "my brother kept us safe."

Beyond the fact that I have never felt less safe than during the Bush interregnum, Trump's jab at Jeb betrayed a truth that no Republican has dared utter: George Bush spent the entire month of August 2001 vacationing at his Texas ranch posing for photo-ops in a 10-gallon hat as he flashed his frat boy smirk, cleared brush and otherwise pretty much ignored what was going on in the larger world.

Stuff was happening, including the 9/11 hijackers trickling into the U.S. and assembling the pieces of their intricate plan to destroy the World Trade Center, Pentagon and perhaps the White House or Capitol building.  And although historians are a little shaky on the details, Bush was so busy not being presidential that he never read or at least didn't pay any particular attention to an ominous memo from CIA Director George Tenet sounding the alarm that Osama bin Laden was determined to strike the U.S. by flying hijacked passenger aircraft into high-profile targets.

Trump coupled his claim on Fox News Sunday that Bush was president on September 11, 2001 with the assertion that had he been president, he would have prevented the attacks, which in the cosmic scheme of things would make deporting 11 million illegal immigrants or building that 1,100-mile wall seem like so much child's play.

Jeb Bush, reaching into his grab-bag of facial expressions (he has three or four), put on his exasperated look and rejoined on CNN that "I don’t know why he keeps bringing this up.  Across the spectrum of foreign policy, Mr. Trump talks about things that-- as though he's still on 'The Apprentice.' "

He suggested Trump might next try to blame FDR for Pearl Harbor, adding "It just calls into question Mr. Trump's credibility as a commander in chief."

Now as entertaining as this stuff is, it is clear that Jeb Bush is almost as big a chucklehead as Trump, and if he is half as smart as his big brother was dumb, he rues the day he decided to run for president, because he has made an extraordinary hash out of it.  (It also occurred to me that part of the problem is that we've given him too much credit from the start; we've unknowingly put the bar too high.)