'Come Witness The Wonder, You May Be A Guardian Of This Precious Land' 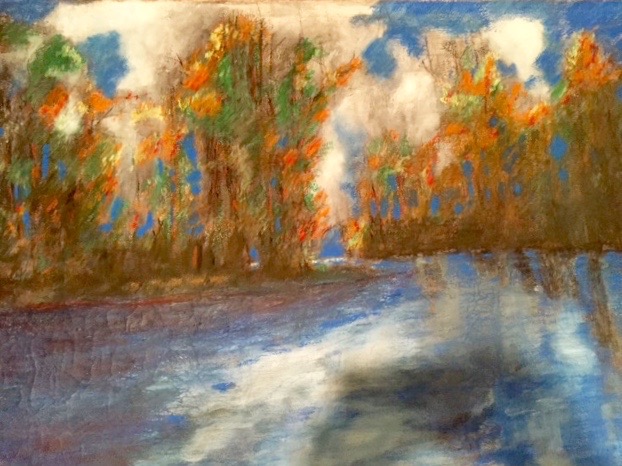 Dorothy Miller died this week.  If you're from the Newark, Delaware area, where I spent many a happy year, you may not have known Dot, but certainly are aware of the open spaces and streams that have been saved from desecration without knowing who to thank.  Well, you can thank Dot, whose legacy will live forever.

Dot was a diminutive woman who tended to blend in with the scenery.  If you did happen to catch a glimpse of her, she was probably hiking a trail in the verdant depths of the White Clay Creek Preserve, binoculars in hand, looking for a ruby-crowned kinglet or the the distinctive woven pouch nest of the northern oriole.

About Dot's legacy: She was the big gun (pardon the term) in the coalition that fought the Du Pont Company's plan to dam the White Clay, which would have created a reservoir of several thousand acres, submerging dozens of historic structures.  A magnificent habitat for rare flora, including wild orchids, and 33 species of mammals, 27 species of amphibians and reptiles, including the endangered bog turtle, 24 species of fish, and 93 species of birds would be wiped out in the service of supplying water to a textile manufacturing plant Du Pont wanted to build at the old Louviers site north of Newark.

Du Pont relented, clearing the way to create the preserve just over the Delaware line in Chester County, Pennsylvania, and adjacent White Clay Creek State Park north of Newark.  Dot was one of the leaders of the campaign that resulted in designation of the entire White Clay Creek watershed as a National Wild & Scenic River, saving it from future development in perpetuity.

Not everything Dot did was greeted positively.

Because of her efforts and those of others, the Preserve is not a park.  It does not have paved roads, athletic fields, swing sets, barbecue pits and such.  If a tree falls, it stays where it falls, and hunting is extremely limited.  Some people don't much care for that.  Then there is the Newark Beltway, a loop highway around the city that would have substantially relived downtown traffic congestion.  Dot and friends insisted that the portion of the beltway over the White Clay be environmentally sensitive.  That would have made the project way too expensive, so bog turtles won and motorists lost.

Dot's passing recalled to mind "White Clay Creek," a wonderful poem written in 1967 by Jean-Henri Sadot just as the fight against the dam was beginning to get traction.  His son, Victor René Sadot, bette known as Vic, a presence in the Delaware folk, rock, blues and Cajun music scenes for many years, set the poem to music.

No one in town can be certain
If the road belongs to the creek
Or the creek belongs to the road.
But having gone that way often,
If I would only dare to speak,
I would judge by my simple code
And proclaim that the two are one.

The road winds along old White Clay Creek,
And passes through its darkened woods.
Huge rocks lying in the water,
Whose swift current tries to sink in the mud,
Having long withstood the old creek's moods.

If you ever ask any wandering child
The whereabouts of "Second Dam"
Of "Bubble Gum" or any fall,
He'll tell you with a hearty smile
On a face smeared with purple jam
From berries picked by the bridge wall
He's been there and knows them all.

So it is with the children
Sandbars and swimming holes they know.
You meet them marching five abreast
At dusk when the fireflies glisten
And the silver moon starts to glow.

Sappa Tamang said...
This comment has been removed by a blog administrator.
12:21 PM