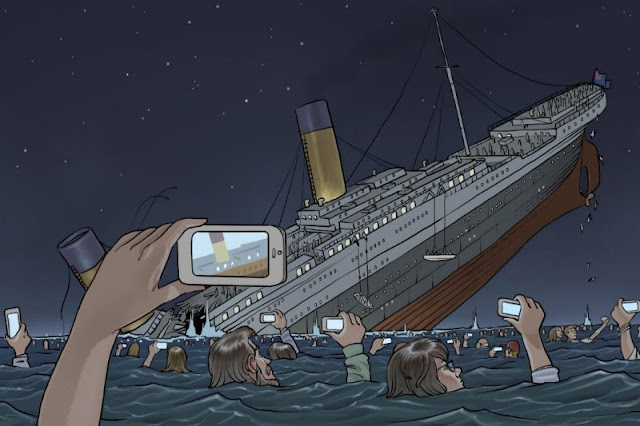 One of the two men who may still have a good chance of becoming the Republican nominee is a scary character. . . . The other man, of course, has very peculiar hair. ~ PAUL KRUGMAN

To say that Republican Party establishmentarians still don't get it following Donald Trump's scorched earth victories in New Hampshire, South Carolina and now Nevada is like saying that if only the deck chairs on the Titanic had been arranged a different way it would have missed that big old iceberg.  Look no further than their pleas for Mitt Romney to endorse Marco Rubio -- or maybe dust off the old rooftop dog carrier and enter the fray himself -- for proof of a mentality that is stuck between denial and anger, which are the first and second stages of grief.

What makes this all so sidesplittingly hilarious is that Rubio hasn't won squat, merely not lost as badly as John Kasich or the late unlamented Jeb Bush and Chris Christie.  That Romney was a godawful candidate in 2012 whose manifold shortcomings -- not the least of which is being a filthy rich insider and conservative poseur -- would spell doom in 2016.  And that Rubio and Romney are dues-paying party establishmentarians espousing reward-the-rich economic policies that are like bad remakes of Groundhog Day and play right into the hands of the necromancer with the very peculiar hair.

The somnambulance of the Republican establishment is, of course, mirrored in the party's voters, which prompted Danielle Allen to make a very astute observation in The Washington Post the other day:

"Like any number of us raised in the late 20th century, I have spent my life perplexed about exactly how Hitler could have come to power in Germany.  Watching Donald Trump's rise, I now understand.  Leave aside whether a direct comparison of Trump and Hitler is accurate.  That is not my point.  My point rather is about how a demagogic opportunist can exploit a divided country."

The deck chair occupied by Rubio, who finished a distant second to Trump in Nevada, is especially problematic.

The chair is further to the right than it seems at first glance, and Rubio is more conservative than Bush, Christie and Kasich.  Not that this matters, because Rubio's biggest selling point -- heck, his only selling point -- is the perception he's best suited to take on Hillary Clinton.  (Those Bernie Sanders ads financed by Karl Rove's attack firm just aren't doing the job. Neither will the Spike Lee radio spot.)

That perception may be true in the abstract, but it assumes several things:

* That Rubio will inherit much of the support and money underpinning the Bush campaign.  That is not a sure thing.

* That there won't be a significant number of fence-sitting Republicans who in disgust jump to the Democratic side.  That is not a sure thing.

* And most importantly, that Trump can be stopped.  That is anyone's guess, but as long as Rubio keeps going after Ted Cruz and not The Donald, it ain't gonna happen.

Speaking of Cruz, who notched his third consecutive third-place finish in Nevada, he's been in something of a free fall since he won the Iowa primary under less than, uh . . . gentlemanly circumstances.  He hasn't won since not because he's a sleaze bag, which he certainly is, but because Trump is siphoning off his core strength -- Evangelicals, who (beats the pants off of me) are attracted by his utter absence of morals and religious conviction.

A huge Trump win in the multi-state Super Tuesday primaries in six days and a deal sealer in Florida on the Ides of March will almost certainly mean he'll head into the nominating convention with enough delegates to upend the remaining deck chairs and wrest the nomination from the clutches of establishment diehards who loathe him.  Or set the terms for the first brokered national convention since 1948, when he and Hillary were in diapers.

Allen's Hitler analogy notwithstanding, I keep returning to the fact Trump is a supercilious idiot who has consistently led all candidates in unpopularity, and it's pretty certain his support has maxed out at 35 to 40 percent of those much written about and oh-so-angry Republican primary voters. The likelihood of independent-minded women, blacks, Hispanics and Asian-Americans flocking to him in the general election is not good.  It took the great ship 2 hours and 40 minutes to sink, and Trump won't last remotely that long before he becomes shark chum on Election Night.

How about a little perspective with your chum?

No Republican -- even Mister Nice Guy Jeb Bush -- pushed back against charges that Barack Obama is an anti-American Muslim, that his health-care reforms would create "death panels," and that he is responsible for the world's ills.  This was just fine so long as the insinuations and fear mongering worked for them, but it created a Franken-candidate spewing xenophobic and racist hate who is endorsed by hate groups and has become the party's worst nightmare as it belatedly realizes there aren't nearly enough lifeboats.

The Titanic, it is said, was doomed by a fatal flaw in its design.  Establishment Republican groups have been talking for months about a concerted effort to take down Trump, but there is a fatal flaw in their design -- all talk and no balls -- and it's obvious they aren't going to avoid that big old iceberg.

IMAGE BY PIERRE BRIGNAUD
Posted by Shaun Mullen at 12:03 AM
Email ThisBlogThis!Share to TwitterShare to FacebookShare to Pinterest