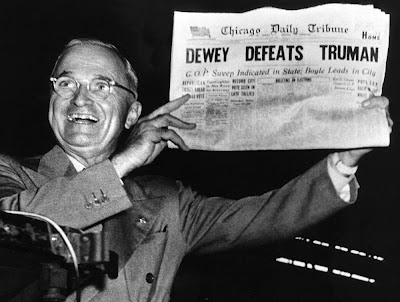 You have to go all the way back to 1948 to find an instance where a political party's strategy is predicated on a president being so weak that the voters can pretty much be ignored. That's what the Republicans did in 1948 only to see Harry Truman get re-elected and that's what they have been doing over the past two years only to see Barack Obama take a healthy lead in national horse race and popularity polls.

That is the conclusion of David Frum (minus the 1948 connection) and there is perhaps no more authoritative commentator today on the parlous state of the Republican Party. Frum, a former George W. Bush administration speechwriter, has the values of the Big Tent GOP of yore and for that reason was banished from the temple. Oh, and because he voiced alarm over the party's rush to the racist right and fawning embrace of the Christianist-Tea Party jihad and its political purity tests.

Obama's rebound is helped considerably by the clown car of Republican presidential wannabes.

If you just came out of a months long coma, they included a wingnut of a congresswoman who believes Obama will send citizens to re-education camps, a billionaire birther with a mean brushover, a Texas governor who gets an F in government and foreign policy, and a former pizza magnate with a zipper problem. This leaves a libertarian with a racist bent, a former House speaker who was censured and fined by his own colleagues, a former senator who believes that a child conceived by rape is a gift from God, and a former governor who is an empty suit.

Some recent polling data backs up how asleep at the wheel Republicans have been when it comes to the guy in the Oval Office.

Ron Brownstein, who has covered almost as many president elections as I have, notes that Obama is reassembling the formidable coalition that elected him in 2008.

To which I add that there is no scenario in which a Republican can beat Obama without the support of women who are not conservative Republicans because of the party's institutionalized misogyny.

When House Republicans suddenly decided to comprise last week on extending the payroll tax reduction and jobless benefits for the rest of the year it was an historic moment.

It was historic because it was the first time that the GOP had reached across the aisle since Obama was elected and did what was right. It also was a reflection that two-plus years of a self-indulgent Just Say No strategy -- again predicated on Obama being so weak as to be unreelectable -- has been a disaster that threatens to drag the last man standing in the candidate clown car into electoral ignominy.

As I have written previously, it is tempting to argue that the ongoing cage match between Karl Rove and the men who would deny him a Mitt Romney nomination is a battle for the soul of the Republican Party. Tempting but demonstrably false because the party lost its soul years ago and the man most responsible is Rove himself.

Rove, who is a terrific tactician but a lousy strategist, launched the GOP on a course of short-term gains at the expense of long-term viability when he engineered the nomination of George W. Bush, an empty vessel into which Dick Cheney and the neo-con brain trust poured their ideas. Ideas like going to war in Iraq while engineering massive tax cuts for the wealthy and shredding the social safety net.

With Rove continuing to be the man behind the curtain, Bush was re-elected in 2004 by making promises to the party's burgeoning Christianist wing that he could not keep and because the Democrats nominated a weakling in John Kerry, who ran a campaign so awful that the attacks on him by Bush-Rove surrogates weren't even really necessary.

In 2006 Rove, was still the GOP's mastermind as it tacked harder to the right, and it is likely that when he awoke on the morning after a Democratic mid-term sweep -- a sweep so complete that no congressional or gubernatorial seat held by a Democrat was won by a Republican and six Senate incumbents were ousted -- he may have had the first inkling that he was losing control of the party.

The 2008 presidential election would not have been a Republican win no matter who the Democratic candidate was. In fact, either John Edwards or Hillary Clinton would have beaten John McCain by a more sizable margin than did Barack Obama, but that reality does not obscure the fact the party was tacking harder still to the right and its whackadoodle ideas as epitomized by the selection of the vacuous Sarah Palin.

By 2010 Rove had, for all intents and purposes, lost control of the party as that Christianist-Tea Party jihad engineered sizable House gains which it, but surely not Rove, took as a mandate for their ideas and not what they really were -- the result of an anger against the Washington establishment fueled by the lingering effects of a recession engineered by Rove's prodigal child.

And so Rove and the GOP itself is now reaping what he sewed -- a party openly hostile to blacks and immigrants (something that he has repeatedly warned that the party will rue) and the middle class and poor -- that has become whiter, older and crankier, a reality reflected in a field of presidential wannabes who are short on ability and long on out-of-the-mainstream ideas.

Somewhere up there Harry Truman is laughing his ass off.