Further Down The Road With The Republican Presidential Clown Car 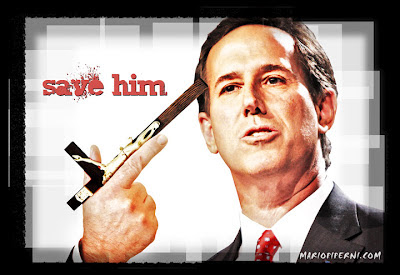 Is there any connection between Rick Santorum slipping into second place behind Mitt Romney in some Michigan pre-primary polls and the video of a speech he gave in 2008 saying that Satan is systematically destroying America that has now gone viral?

One can only hope so, but the more likely case is that as they have with other presidential candidates, Santorum becomes less appealing to voters when they look under his hook and kick his tires, especially because of his fondness for demagoguery and meddling in our private live
"If you were Satan who would you attack in this day and age? There is no one else to go after other than the United States. And that’s been the case now for almost 200 years," said Santorum in the speech. "The place where he was in my mind most successful, first successful, was in academia. He understood the pride of smart people."

"This is not a political war at all. This is not a cultural war. This is a spiritual war. And the Father of Lies has his sights on what you would think the Father of Lies would have his sights on: a good, decent, powerful, influential country – the United States of America. If you were Satan, who would you attack in this day and age. There is no one else to go after other than the United States and that has been the case now for almost two hundred years, once America's preeminence was sown by our great Founding Fathers."

Rantings like this are, of course, just the tip of the Santorum iceberg. He is unapologetically misogynistic, anti-contraception and pro-rape, disparaging of public education, takes American exceptionalism to . . . er, extremes, and never saw a war he didn't like, the latter view very much at odds with his own Roman Catholic Church.

The likelihood of Santorum having the opportunity to nuke Iran is slim to none. The GOP would be committing ritual suicide on a grand scale even if he were the eventual nominee's running mate, let alone the main man.

MILLIONAIRE MITT IS GOING BROKE
In yet another indication that the wind continues to go out of Romney's sails (despite some ferocious gusts from Santorum and Gingrich), his campaign is running out of money.

In January, Romney spent more than he took in; his cash flow was negative $12.2 million for the month. He ended January with just $7.7 million in cash on hand.
Romney has relied almost exclusively on wealthy donors because he has been unable to attract the nickel-and-dime voter like President Obama has. In fact, Obama has raised more money from donors who contributed $250 or less than Romney has raised altogether.

RON PAUL: DOUBLE DIPPER
As scandals go, double billing for airline tickets is small potatoes, but it's kinda surprising that Ron Paul, that pillar of probity, has been caught out doing just that. Numerous times.

Roll Call reports that Paul was repeatedly paid twice for flights between Washington, D.C., and his Congressional district in Texas, receiving reimbursement from taxpayers and also from a network of political and nonprofit organizations that he controlled.

Paul spokesmouth Jesse Benton said then it was “possible that wholly inadvertent errors were made in a handful of instances” in which flights were reimbursed twice, but he maintained that “absolutely zero taxpayer funds were ever misused.”

I suppose that depends on how you look at it.
THIS JUST IN
There is no such thing as the Catholic vote.Ed Kilgore notes that polls taking during the recent contraception mandate controversy did not show a significant difference between Catholics and other voters on this issue This should not come as a surprise since lay Catholics differ greatly from the church hierarchy on issues raning from birth control to same-sex marriage.

There is continuing disapproval of abortion on moral grounds among Catholics more than the population as a whole, mostly because of Latino Catholics.

HOLD THE APPLAUSE
Dan Millbank beautifully captures the special something that Romney elicits in a Washington Post column:

"In terms of sizzle, Senator Rob Portman makes Mitt Romney look like Lady Gaga. So when the two men shared a stage in suburban Cincinnati on Monday afternoon, the result was pure and unadulterated ennui — exactly the sentiment greeting Romney’s presidential aspirations in the Republican electorate.

" 'If you think,' the Ohio Republican exhorted the crowd, 'we need fresh new direction and decisive leadership in the White House, then Mitt Romney is your man.'

"Silence in the audience.

"'If you think government has grown too large,' the senator continued, 'then Mitt Romney’s your man.'

"Five more times, Portman tried the refrain, and each time it produced no reaction. He hurried through his script, straightened out his pile of index cards and called forward Romney, who gave an equally lively speech that praised, among other things, ulcer medication."