Should We Believe Mitt Romney's Claim That He Created 100,000 Jobs? 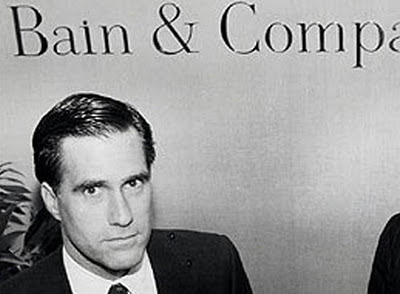 While Mitt Romney may be misunderestimating, as a certain former president would say, the damage that his get-filthy-rich tenure at Bain Capital is causing, opposition researchers are having a devil of a time disproving his claim that he created 100,000 or 120,000 jobs (he has cited both numbers) as CEO of the private-equity company, while supporters are having an equally hard time proving that he is right.

In any event, the majority of the jobs Romney takes credit for creating come from a single source: Staples Inc., and a closer look shows that he is kind of right and kind of wrong.

Romney is kind of right in saying that he helped create 89,000 jobs at Staples, which is the number of employees that the office supply giant currently has. But Bain's investment in Staples was a mere 10 percent of the start-up cash it raised and when Romney left Bain the fledgling retailer only had a single store with fewer than 200 employees.

The larger picture is muddled.

Citing four companies that the Wall Street Journal looked into -- American Pad & Paper (Ampad), Dade Behring, DDI, and Stage Stores—that Bain made very profitable investments in and took money out of that later went bankrupt, Kaplan arrives at these numbers:

Stage has about 3,900 more employes today than in 1996 when Bain invested in it, Dade Behring in its present incarnation has about 1,000 fewer jobs and DDI about 1,500 fewer jobs, while the numbers for Ampad are impossible to ascertain.

"What the article does not tell you is what happened before and after those bankruptcies," Kaplan writes. "When you add it all up today, even in these investments, it looks likely that Bain Capital created jobs overall."

He concludes that "While we will probably never be able to measure the true numbers, it seems pretty clear that 'looting' is an inaccurate description of what happened with these companies."

This, he says, is because Romney himself has failed to produce credible numbers. He and his surrogates have cited Staples and Sports Authority as success stories but have said zilch about the Bain investments that have lost jobs.

Meanwhile, the Obama re-election team, using the 100,000 jobs-created number as a benchmark, taunts Romney by saying "his claim is ever changing" in this chart: 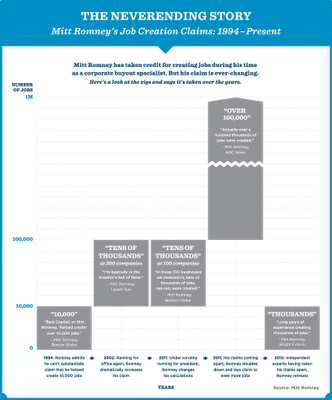 The bottom line, Murphy says, is that the 100,000 figure was not actually calculated; it was "just a composite of a couple of data points, and there's no evidence that it's actually a 'net' figure," according to Romney's own campaign.

Meanwhile, Jonathan Last of the right-leaning Weekly Standard enters the fray with the cogent observation that people don't credit the jobs created by McDonald's, Home Depot, and Apple to the money men. The credit goes to the idea men -- Ray Kroc, Bernard Marcus, Arthur Blank, Steve Jobs, and Steve Wozniak.

"This doesn’t make Romney a bad guy," writes Last. "It makes him a wise investor -- and investors are incredibly important. But the skills of an investor aren’t those we think of first when contemplating the presidency. If they were, Warren Buffett would be squaring off against George Soros every four years."

"More importantly, Romney's real skills differ in important ways from the ones he's been advertising. Voters may sense this. And it's one more reason why Romney hasn't been able to close the deal with skeptical Republicans."

When challenged on the accuracy of his job creation figures during a Republican debate by George Stephanopolous of ABC News, Romney told the audience they should just trust him.

"I'm a good enough numbers guy to make sure I got both sides of that," he said.

Okay, Mitt, we trust you.