Science Sunday: Unlocking The Mystery Of Why Fireflies Blink & Blink In Sync 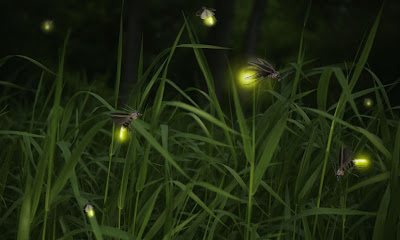 If you catch a firefly and keep it in a jar / You may find that you have lost a tiny star / If you let it go then, back into the night / You may see it once again star bright
-- LILLIAN MOORE
Because last year was so extraordinarily wet, it has been as glorious a summer for fireflies as I can recall in many moons, perhaps the most glorious since the early 1970s when I lived on a farm. 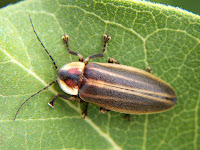 beetle order Coleoptera and are, of course, notable for their use of bioluminescence to produce a "cold light" to attract mates or prey. The several species of fireflies hereabout produce a yellow light, but many of the others in the family of 2,000 species glow a green or pale red.

Scientists have come to understand why the firefly's lower abdomen is able to emit light only fairly recently. It was still very much a mystery in the early 1950s when, as a child, my brother and I collected fireflies in Mason jars and sold them to a man at the local agricultural extension station for a dime a jar. It seemed great fun then but it was, I suppose, an act of cruelty that I never would repeat today, and I always take care to remove fireflies that become stuck in our screens.

Anyway, it eventually was ascertained that a firefly's bioluminescent light production occurs in specialized light-emitting organs when the enzyme luciferase acts on the 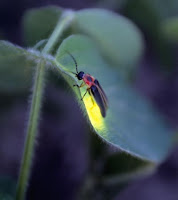 light-emitting compound luciferin in the presence of magnesium ions, the nucleotide ATP and oxygen.

Incidentally, firefly luciferase is used in forensics and to detect ATP and magnesium, while Renaissance painters used a powder of dried fireflies to create a photosensitive mixture. The great Caravaggio may have used this powder in his uniquely lit paintings, including the one reproduced below this post.

While it has been understood that fireflies glow to attact prey and mates, it has only recently been ascertain why they glow in sync, something that I have pondered many a summer evening while sitting on the back deck of the mountain retreat, an area perfect for the little critters because of the presence of wet wooded areas where their larvae (photo, below right) known as glowworms, have abundant sources of food.

It turns out that male fireflies literally need to have rhythm to find females, although it takes something more to actually find a mate.

A new study shows that when male fireflies synchronize their flashes, it helps their female 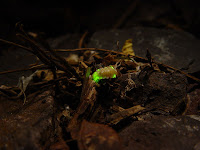 counterparts to find males of her own species among the other species of fireflies flitting about on warm summer evenings.

"When she sees males flashing together in the right pattern, she can then answer with her 'come hither' counter flash," writes Larry O'Hanlon at Discovery News.

"What the females are doing is looking for the number and tempo of flashes," said firefly researcher Andrew Moiseff of the University of Connecticut. That's much easier for her to see when the guys work together.

"The dialogue is that the males are flying and flashing their species-specific pattern," said Moiseff. And a female of their species on the ground sees and recognizes this flash pattern, then sends out another flash signal which says, "Hey guys! I'm one of your species, but female."

Moiseff and his colleagues confirmed this behavior by rigging up light emitting diodes (LEDs) to mimic the flash patterns of fireflies. 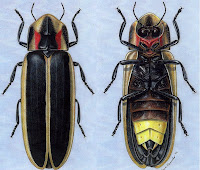 All this flashing is not the end of the mating game, however.

"Six to a dozen males may be attracted," said Moiseff. "We don't know if she's distinguishing among males when she responds."

Moiseff says that anyone who lives in an area with fireflies can experiment for themselves with a flashlight.

"You'll typically have three to four species in your backyard," said Moiseff. "If you watch carefully, you'll see the different species' flash patterns of the males in the air."

He explains that by flashing a small flashlight on the ground, you can imitate a female and sometimes get males to drop down to the ground to check out your flashlight.