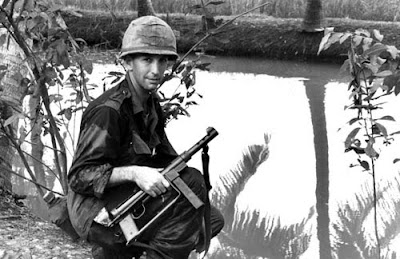 And like the Pentagon Papers, which were leaked by former Defense Department aide Daniel Ellsberg, the outcry over the WikiLeaks.org document dump will have more to do with whether The New York Times and other publications should have published them, although it's a safe bet that the Obama administration will not take the lead of the Nixon administration, which went all the way to the Supreme Court to block publication, as well as broke into Ellsberg's office.

(The high court, in a liberal interpretation of the First Amendment that would be unthinkable today, ruled 6-3 that the administration's prior-restraint injunctions against publication failed to meet the heavy burden of proof required.)

* * * * *
There is another similarity as well: The Pentagon Papers, in a turn of phrase that has become part of the American lexicon, concluded the U.S. was "losing the hearts and minds" of the Vietnamese people, while the Afghan documents reveal a horrifying number of incidents in which innocents have been killed because of indiscriminate air and drone strikes, as well as troops shooting unarmed drivers and motorcyclists while trying to protect themselves from suicide bombers.

And one more similarity: As James Fallows helpfully recalls, perhaps the most damning aspect of the Pentagon Papers was the inclusion of a high-level memo stating the reasons that the U.S. should -- and did -- stay the course. To avoid a humiliating defeat was ranked at 70 percent, while keeping South Vietnam from Chinese hands came in at 20 percent and permitting the South Vietnamese to enjoy a freer way of life a mere 10 percent.

Which begs the question of why the Obama administration is doubling down in Afghanistan with the knowledge, vividly conveyed in the document dump, that we're losing Afghan hearts and minds, the Taliban are stronger than ever, Pakistani intelligence is in bed with the Taliban, and there is no indication that the strategies implemented in South Asia -- from the post-9/11 invasion to the present day -- stood or stand the slightest chance of working.

* * * * *
The Afghan document dump was not totally without surprises.

There is mention of the hitherto unknown Task Force 373, a "black" unit of special forces that hunts down and assassinates Afghan policemen and civilians, revelations that Osama bin Laden's trail may not have been as cold as the Bush administration would have liked us to believe, and that remote-controlled drones aren't as successful as they have been portrayed to be.

Meanwhile, one "surprise" cited by several pundits should be anything but: That some of the Stinger missiles that the CIA so indiscriminately funneled to the mujahideen during the Soviet occupation are being used against U.S. troops, and in one case brought down a helicopter.

Oh, and anyone who is surprised that Washington, Kabul and Islamabad, let alone informed citizens in those countries, are shocked just shocked by the disclosures must have been in a coma. It is for this reason that I find Joe Kline's comparison of the document dump to the Tet Offensive to be disingenuous, and not just because 2010 is not 1968.

The offensive, which was a huge propaganda victory for the North Vietnamese and Viet Cong although not a military victory, blindsided an increasingly restive American public. Not so the case today. People across the political spectrum already are restive, while as noted here only yesterday, young men aren't being drafted by the hundreds of thousands as they were at the height of the Vietnam War, which has tended to keep the domestic rabble in check.

* * * * *
The Guardian, which along with the Times and Der Spiegel was given the documents, sums them up best in an editorial:

"[A] very different landscape is revealed from the one with which we have become familiar. These war logs – written in the heat of engagement – show a conflict that is brutally messy, confused and immediate. It is in some contrast with the tidied-up and sanitised "public" war, as glimpsed through official communiques as well as the necessarily limited snapshots of embedded reporting. . . .

"However you cut it, this is not an Afghanistan that either the US or Britain is about to hand over gift-wrapped with pink ribbons to a sovereign national government in Kabul. Quite the contrary. After nine years of warfare, the chaos threatens to overwhelm. A war fought ostensibly for the hearts and minds of Afghans cannot be won like this."