What Has That Barry Obama Done In 18 Months? A Lot More Than You Think 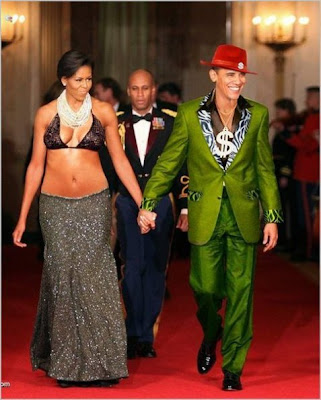 The prez and prezette also brought some much needed fashion sense
To say that the now 18-month old Obama presidency has been a huge success is an exaggeration. Look no further than a jobless economic recovery and the stalemate in Afghanistan for a head's up on that. But to say that it has been a disappointment, as some libruls as well as the usual Republican suspects claim, is inane.

In fact, you probably have to go back to the first 18 months of the accidental presidency of LBJ to come even close to the sheer volume of accomplishments.

For openers, the dude did avert a complete economic meltdown, in part through a $789 bill economic stimulus package.

For another, he enacted the most sweeping health-care reform since forever.

For yet another, and these are especially near and dear to my heart, he extended veterans' health-care benefits, returned the GI Bill to its former robust self and most recently reformed the ridiculously arcane regulations that have prevented many veterans from getting disability payments for post traumatic stress disorder.

Meanwihle, courtesy of Ugandans at Heart, he also:

* Began the draw down of U.S. troops from Iraq.

* Phased out the beyond expensive F-22 warplane and outdated weapons systems.

* Instituted a new policy on Cuba, including allowing Cuban families to return home to visit loved ones.

* Cracked down on the credit card industry.

* Appointed the first Latina to the Supreme Court.

Oh, and he had a swing set built on the White House lawn.

Hat tip to BooMan at the Booman Tribune
Posted by Shaun Mullen at 12:10 AM
Email ThisBlogThis!Share to TwitterShare to FacebookShare to Pinterest

I hate to sound cynical (no I don't), but these are the bare minimum that will provide some folks who continue to believe with a list of "accomplishments," while Obama has re-inforced the rule of banks and the military-industrial complex. The problems this country faces require structural, or at least Rooseveltian changes. It's either empire or democracy.
By the way, that pic at the top is the sort of thing that got the New Yorker in trouble with the irony-challenged. Nice arms!

You are correct, of course, but anyone who thought that Obama was going to single-handedly change the way Washington did business, was in for a deservedly rude awakening.

Como Eliminar La Celulitis said...
This comment has been removed by a blog administrator.
6:38 AM