Iran, Bush and the Case For Democracy 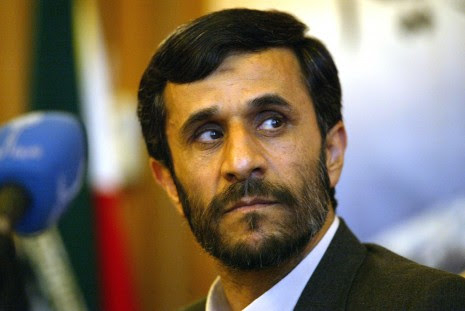 Country Bumpkin, my New Zealand cousin, is an astute observer of Mideast politics, and we're not talking about Ohio and Indiana.

Country Bumpkin calls our attention to an article by commentator Mark Steyn (hat tip to the Little Green Footballs blog) about Iran and its hair-on-fire President Mahmoud Ahmaddasanatta (above), as well as the state of international affairs and diplomacy in the context of Iran's saber rattling.

For the entire Styne article, go to:


http://www.suntimes.com/output/steyn/cst-edt-steyn11.html
All of this "ought to make the foreign affairs establishments of your country and mine very, very nervous," observes Country Bumpkin. He is correct.

Herein lies the great geopolitical issue of our time: How, for Pete's sake, do we reason, negotiate and agree with the Iranian Ahmadinejad, with Hezbollah, with Mugabe, with the al Aqsa Martyrs Brigades and all the other lunatic loose cannons and the regimes which shelter them, and stop them from killing people. (Notice I managed to get through that without once mentioning al Q'aeda and the United Nations. But wait. There's more.)

Natan Sharansky, former Soviet dissident and political prisoner, spent nine years in the Gulag for daring to apply for a visa to emigrate to . He has prospered since he was allowed to go, and out of his new-found freedom and his experiences, he published in 2004 "The Case For Democracy," in which he proposes some answers to the question. (For an interview in which he discusses his ideas, go to http://www.meforum.org/article/666).

Sharansky's thesis may be summarised like this (with acknowledgments to the New Zealand Jewish Chronicle, which published my review of "The Case For Democracy", from which the following material is extracted).

The central theme of Sharansky's work is this. The world is divided in two. There are free societies, and there are "fear" societies. Fear societies are inherently unstable because though they contain a proportion of loyal adherents to the regime, there are sizeable groups of "double-thinkers" who hate the regime but go along with it to insure their personal safety, and there are dissidents prepared to take risks and actively oppose the regime.

Free societies, on the other hand, recognise and tolerate the turbulence and dissent inherent in democracy. They are able to mediate political tides and the constant turmoil of human affairs, without the need for oppression and victimisation. Free societies have a free press, an independent judiciary, genuine elections -- the indispensable elements of democracy with which we are all familiar.

Fear regimes are ever driven to exert greater measures of control and repression over their dissidents and double-thinkers, because dissent is always growing, The regime can neither block out completely what is happening in free societies, nor can it damp down its population¹s resentment of oppression. Eventually fear societies seek external enemies, to distract their own populations. World peace is put at risk.

Free societies have material assets which fear societies want to share. Greater levels of progress and prosperity are found in free societies, along with innovation and technical and social advancement. (Despite its claims, the was falling well behind the by the time it collapsed.) Fear societies have an interest in acquiring such advantages without giving up their tyranny, and it is on this point that Sharansky¹s proposition turns.

The failure of modern diplomacy, says Sharansky, has been the failure to recognise that regimes in fear societies have no incentive to move to a more democratic model, unless such a relaxation is first made a firm condition of any assistance or favourable arrangement provided by a free society. This diplomatic failure comes about because Western diplomacy has long held that the key to world peace and progress is stability. Better the devil you know than the one you don't, no matter how ghastly the tyrant or what human rights and civil freedoms are being trampled underfoot.

This has been accompanied by a loss of "moral clarity," the failure to distinguish between the acceptable and the unthinkable for reasons of pure geopolitical self-interest. (Did any such moral clarity ever exist? Not since the War, anyway.) Readers will be irresistibly drawn to think of the United Nations, the consequences of its failures, and its structural inability to separate right from wrong.

For all the shouting and storm and contention surrounding it, the Bush adventure in has been an attempt to adapt this advice. We need to wait a while longer to know if it will work, but indubitably it is a geopolitical initiative based on new assumptions.

Quite a few of you will find this assertion too much to swallow. But allow Country Bumpkin this, at least. You may not admire George W. Bush but you ought, in fairness, admire his reading habits, which includes "The Case For Democracy".

Go read it yourself.

Posted by Shaun Mullen at 7:07 AM
Email ThisBlogThis!Share to TwitterShare to FacebookShare to Pinterest