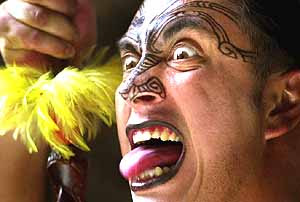 Country Bumpkin drops by Kiko's House from New Zealand to report this bit of mind bogglement:

The box featured a quasi Maori design and a map of New Zealand.

Te Reo Marama spokesman Shane Bradbrook told NZPA the use of the Maori name and the image was a defilement and unbelievable considering the high smoking rate among Maori.

"Would we have them here and call them Jewish Mix? It would be as offensive to the people in Israel as it is offensive for Maori."

Oddest aspect of this story is that the cigarette packet also sports a picture of a turntable playing a vinyl disk. A turntable? Vinyl disk?

One can only speculate about how Philip Morris' product branding decisions were arrived at, but at least they managed to slip the musical equipment past the Maori objectors. A clean bill of health, you might even say.

Israel-New Zealand relations have always been a bit fraught. Who knows what this might do?

Posted by Shaun Mullen at 6:15 AM
Email ThisBlogThis!Share to TwitterShare to FacebookShare to Pinterest