Science Sunday: It's Too Darned Hot 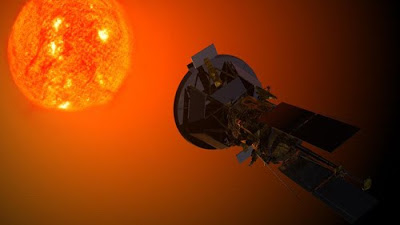 Why would you want to build a spacecraft good for only one mission and that mission is terminated when the spacecraft melts under intense heat?

Well, meet the Solar Probe Plus, which NASA hopes to crash into the Sun -- or get as far into the sun's atmosphere as possible -- sometime before 2018.

The car-sized $180 million SPP is likely to be destroyed by temperatures exceeding 2,550F before actually reaching the Sun, but will have obtained valuable data about our parent star.

To withstand the temperatures and radiation, the instruments will be protected by a huge carbon-composite heat shield that still needs to be built.

Surprisingly, the Sun is one of the few places people have not yet sent a spacecraft.

"Trying to understand how the Sun influences the Earth is quite a big thing these days," Richard Harrison, a solar physicist from the UK's Rutherford Appleton Laboratory, told BBC News. "The one thing we've never done is actually go there. You think of a spacecraft flying past Mars or Venus, but with the Sun, it is a little bit different."

Lika Guhathakurta, a Solar Probe Plus program scientist, said that "for the very first time, we'll be able to touch, taste and smell our Sun."

The spacecraft will be equipped with various instruments, among them a solar wind particle detector, a 3D camera, and a device to measure the magnetic field.

Harrison said that to many people, it might seem strange that the Sun actually has an atmosphere.

But it does, he explained: "It's this million-degree plasma [that consists of] charged particles, trapped in magnetic loops, sort of super-magnetic fields."

One of the aims of the SPP mission is to understand the nature of the "solar wind," the mass of charged particles that billows away from the Sun into space.

"The experiments selected for Solar Probe Plus are specifically designed to solve two key questions of solar physics: why is the Sun's outer atmosphere so much hotter than the Sun's visible surface, and what propels the solar wind that affects Earth and our Solar System," said Dick Fisher, director of NASA's Heliophysics.

"We've been struggling with these questions for decades and this mission should finally provide those answers."

The SPP is not the only project underway to get close to the Sun. Both NASA and the European Space Agency are working on another mission called Solar Orbiter, a satellite that may go to the star at the end of this decade.

But Professor Harrison said that the SPP has far more ambitious goals.

"The Solar Probe will literally slice through a bit of the Sun's atmosphere, and that's never been done before," he said. "The real challenge will be making the measurements - you don't want to just measure the effects that you've driven on the atmosphere [by the spacecraft].

"It's a bit like if you're pushing a boat through a river and measuring something about the surface - you don't want to measure the ripples from the boat. It's a real challenge, but it's something that is do-able."