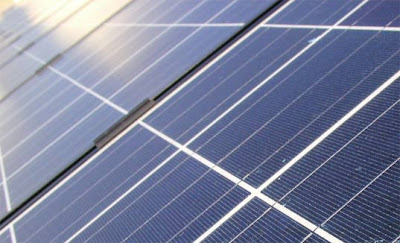 When the Dear Friend & Conscience bought the mountain retreat nearly three years ago, it had many charms: Situated between a ridgeline that is a flyway for 12 species of raptors and a 38,000-acre wildlife refuge that is home to more species than you can count, the ranch house is Plain Jane on the outside but roomy on the inside and even more so since we've knocked down a wall and installed large energy-efficient casement windows and sliders that let in the stunning views and sunlight year round while keeping out the heat and cold.

The house had another advantage as well: By my crude reckoning, the back of the roof is nearly Solar South, making the house a good candidate for an electricity-generating passive solar power system.

A guy from a well-known international firm did a solar audit on the house last month.

The house is indeed nearly Solar South, being a mere 7 percent from the ideal. His conclusion, reinforced by an old friend in Colorado who has been building solar houses since 1972, is that we can generate more than enough electricity to meet need our needs with a 28-panel photovoltaic array on the back of the roof. The array will be wired through to a converter and two-way meter in our basement utility room.

The total cost of the installation is not cheap, but solar cell prices have plummeted in recent years with increased demand and improved manufacturing techniques. The DF&C is signed up for a lease-to-buy program and after a reasonable time the system will be hers.

And there is a big bonus: The reason that the meter is two-way is that under Pennsylvania law, from Day One the local power company will be required to buy the unused electricity that is generated, meaning that their end of the meter will literally run backwards. A beautiful thing, or what?

There are a limited number of slots for Pennsylvania homeowners. If you are one and are interested in learning more, drop me an email and I'll point you in the right direction.

Shaun, congratulations are in order here. You will not be disappointed in getting solar, as there are more advantages than you initially thought. Let me give you just a few. First, when you have solar panels on your roof, they are often raised above the roof itself by about 6-12 inches. This will keep you roof cooler in summer and the house cooler as well. In addition, it will protect your roof shingled surface in better condition and it may actually increase the number of years before you need to replace your roof. I have first hand knowledge of this as I have 45 panels on my roof in California and have had them for over 8 years now. Mine has paid for itself and so the savings are all gravy. The meter really does go backwards during peak hours. Good luck with yours and it's great for the planet.

Good thoughts all. Thank you.

As I note in my post, I have a good friend who has been doing solar since 1972, primarily in Colorado, but occasionally in the Utah desert and Central America where he has helped install solar for indigenous peoples through a solar charity.

I helped him a bit with his first installation some 38 years ago: Four dozen water-filled 55 gallon drums arrayed along a trombe wall that generated barely enough electricity to run a toaster.

We have indeed come a long way.