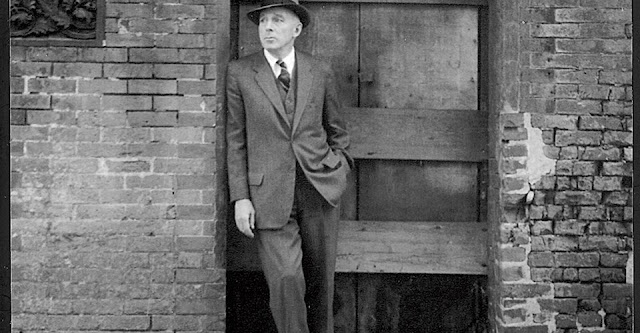 WHEN THE NEW JOURNALISTS CAME ASHORE, JOE MITCHELL WAS THERE TO GREET THEM. ~ JOHN McPHEE

Sadly, upon his death in 1996 at age 87, Joseph Quincy Mitchell was less known for his extraordinarily elegant writing in The New Yorker than his decades-long case of writers block.

Mitchell, who died in 1996 at age 87 after a 48-year career at The New Yorker, is arguably the patron saint of literary journalism, or long-form journalism, as I prefer to call it, as well as New Journalism, a term Mitchell loathed, never mind that the genre has bequeathed us Truman Capote, Joan Didion, Gay Talese and Hunter S. Thompson, among other ink-stained greats.

Like the characters whom Mitchell profiled, from an eccentric misfit by the name of Joe Gould to the bearded Lady Olga to Louie Morino, a contemplative restaurateur, he was a character himself.  Thomas Kunkel lovingly relates this in A Man in Profile: Joseph Mitchell of The New Yorker, a first-rate biography made better still because of its emphasis on Mitchell's writing with its Joycean (and he loved James Joyce) layers of detail, precisely rendered dialogue, poetic rhythms and imaginative leaps.  Mitchell called his prose "wild exactitude."

Mitchell covered the Lindbergh baby kidnapping trial while reporting for the New York World-Telegram and later did celebrity profiles for The New Yorker, but preferred simpler folk.  While his good friend and fellow New Yorker great A.J. Liebling called his subjects "characters," Mitchell drew deeply empathetic portraits of his own subjects, and no matter how freakish these bums, street preachers, grifters and leeches sometimes were, he was often funny but never condescended or pandered.

From his profile of Lady Olga:

Her thick, curly beard measures thirteen and a half inches, which is the longest it has ever been. When she was young and more entranced by life under canvas, she wore it differently every year; in those days there was a variety of style in beards -- she remembers the Icicle, the Indian Fighter, the Whisk Broom, and the Billy Goat -- and at the beginning of a season she would ask the circus barber to trim hers in the style most popular at the moment. Since it became gray, she has worn it in the untrimmed, House of David fashion.

We meet Louie Morino in "Up in the Old Hotel" (from which my favorite Mitchell anthology took its name).  The wordly-wise Louie runs Sloppy Louie's, a seafood restaurant in former hotel in a rundown old building on South Street in the Fulton Fish Market.  Louie bemoans the passing of the time when only fishmongers came into his restaurant. Now well-heeled businesspeople crowd the joint and he reluctantly puts tables on the second floor, but it's still too crowded.

"I got to make room someway,” Louie says.

"That ought to be easy," Mitchell replies. "You've got four empty floors up above."  But it isn't easy because you have to ride a decrepit, uninspected elevator that has to be pulled up by hand and Louie has never worked up the courage to use the elevator in the 22 years he has rented the building:

I just don’t want to get in that cage by myself. I got a feeling about it, and that's the fact of the matter. It makes me uneasy -- all closed in, and all that furry dust. It makes me think of a coffin, the inside of a coffin. Either that or a cave, the mouth of a cave. If I could get somebody to go along with me, somebody to talk to, just so I wouldn’t be all alone in there, I'd go.

Mitchell, of course, goes and in an empty hotel bedroom at the rear of the third floor is a placard tacked to the wall saying "The Wages of Sin is Death; but the Gift of God is Eternal Life through Jesus Christ our Lord." Louie has had enough.  Mitchell wants to go up to the other floors, but Louie says no. "There’s nothing up there."

Back in the elevator, writes Mitchell:


Louie was leaning against the side of the cage, and his shoulders were slumped and his eyes were tired. "I didn't learn much I didn't know before," he said.

"You learned that the wages of sin is death," I said, trying to say something cheerful.

Mitchell's last and most famous piece was "Joe Gould's Secret," which was published in 1964.

Gould lived on handouts, was famous for doing seagull imitations at parties, but best known for a massive, multi-volume compendium called the Oral History of Our Time, which Mitchell wrote about at length in a 1942 profile.  When he returned to the subject in a 1964 profile, he revealed Gould was a fraud and Oral History did not exist.  But Mitchell not only forgives Gould after berating him for his lie, he confesses that he is guilty of the same thing.


I have always deeply disliked seeing anyone shown up or found out or caught in a lie or caught red-handed doing anything, and now, with time to think things over, I began to feel ashamed of myself for the way I had lost my temper and pounced on Gould. . . .

He very likely went around believing in some hazy, self-deceiving, self-protecting way that the Oral History did exist . . . It might not exactly be down on paper, but he had it all in his head, and any day now he was going to start getting it down.

It was easy for me to see how this could be, for it reminded me of a novel that I had once intended to write . . . under the spell of Joyce's Ulysses.

The book was to be about New York City and tell the story of a young reporter from the South like himself who was no longer a practicing Baptist but is still inclined to see things in religious terms, and whose early exposure to fundamentalist evangelists has


left him with a lasting liking for the cryptic and the ambiguous and the incantatory and the disconnected and the extravagant and the oracular and the apocalyptic. I had thought about this novel for over a year. Whenever I had nothing else to do, I would automatically start writing it in my mind. . . .  But the truth is, I never actually wrote a word of it.

Years later, long after Mitchell stopped publishing, he was asked why he found Gould so interesting.

"Because he is me," Mitchell replied.

Kunkel explores in depth what was something of an open secret in Mitchell's lifetime: He used composites and invented figures, an acceptable practice for feature writers of an earlier time if not exactly kosher today.

Mitchell's famous character of the elderly and eccentric Mr. Hugh G. Flood, who appears in three of his stories, was a composite, and Mitchell admitted as much when the Flood stories were republished in book form in 1948.

There were other fabrications: Cockeye Johnny Nikanov, the self-styled King of the Gypsies, and Orvis Diabo, the main subject of a piece about the Mohawk Indian steelworkers who work high atop skyscrapers and bridges.

Kunkel never quite solves the mystery of why Mitchell went into his office at The New Yorker one day in 1964, shut the door and sat at his desk, and did so practically every day for the next 32 years without publishing a single word, perhaps the most famous case of writer's block in literary history.  But Kunkel suggests that as Mitchell's powers declined with age, with the death of his beloved wife and soulmate Therese and then his father, his increased responsibilities elsewhere, his demands on himself as a journalist never diminished and ultimately crushed his ability to write.

Joseph Mitchell had a cult-like following, but was a seemingly elusive figure.  But Kunkel gets it exactly right when he says that Mitchell was and remains most clearly visible in his own writing.

Jill LePore, writing in a recent issue of The New Yorker, reveals that she tracked down several journals and other fragments written by Joe Gould, more or less debunking Joseph Mitchell's notion that Oral History was not entirely in his imagination.


PHOTOGRAPH BY THERESE MITCHELL / COURTESY OF THE JOSEPH MITCHELL ESTATE
Posted by Shaun Mullen at 12:05 AM
Email ThisBlogThis!Share to TwitterShare to FacebookShare to Pinterest