Politix Update: I Adore You, Joe Biden, But Please Don't Run For President 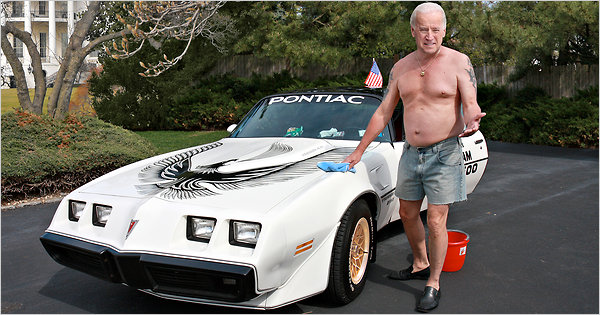 Playing beach volleyball on summer vacations as a teenager with a guy who ended up a heartbeat away from the presidency does not qualify me to comment on Joe Biden, while being a native Delawarean who has closely watched and cheered on his four-decade ascendancy from county councilman to Vice President of the United States, with an occasional handshake and exchange of pleasantries at a football game or other event at our alma mater, gives what I have to say only a little gravitas.  But as someone who happens to have covered presidential politics since not too long after Joe and I had to get serious about the business of growing up, I have three little words for him: Please don't do it.

Okay, that's four words, and what I don't want him to do is, of course, run for president.

One reason Joe's star has risen so high is because he succeeded Cheney, who acted as a de facto president when it suited his imperial self, usurped the roles of national security adviser and secretary of state, was a tireless cheerleader for the use of torture and fear mongering, a scold in accusing anyone who didn't agree with him as being unpatriotic, and was a key player in going to war against Iraq, which has inexorably led to the rise of ISIS.

By contrast, Joe's chops as a conciliator, honed through 36 years in the Senate, has thrust him into the spotlight at key junctures in the seven years since Obama was first elected.  Additionally, and perhaps most importantly as history will show, Joe has played a vital role as Obama's devil's advocate with the encouragement of a president nearly two decades his junior.

There are those who will tell you that Joe was destined for greatness, but I would not be one of them.

I met Joe when I was 12 and on my way to junior high school, and he was 17 and entering his senior year at a Roman Catholic boy's school outside of Wilmington. He was a gangly kid with no apparent social skills and had a stutter. We played beach volleyball together at the Delaware shore over several summers, and his folks and my folks became friends. Delaware, you see, is even smaller than it looks on a map.

Joe went on to the University of Delaware, where he excelled at political science in a department later chaired by the late Jim Soles, who was to attract the future managers of both the 2008 Obama and McCain campaigns to Delaware as undergrads. I followed him to Delaware, where I excelled at nothing except repeatedly getting in trouble with the university administration as editor of the student newspaper.

Although I sort of kept up with Joe through our parents' friendship, our paths didn't cross again until 1972, my second election as a voter, when I pulled the lever for a man who had long left behind the traits of awkward adolescence.

Joe upset a longtime Republican U.S. senator, but within days of the election suffered the tragic deaths of his wife and baby daughter in a traffic accident.  His sons Beau and Hunter survived, and Joe -- determined to quit before even being sworn in -- stayed at their hospital bedsides day and night for weeks until Senate Majority Leader Mike Mansfield, who made repeated trips to Wilmington, convinced Joe otherwise.  Joe began the first of six terms in Washington -- at 29 the youngest senator in modern history -- and a tenure in the upper chamber that was to be characterized by hard work, growing foreign relations expertise, a willingness to compromise, and a successful hair weave, as well as a dismaying tendency to shoot from the lip.

Like vice presidents in general, Joe has been subjected to ridicule.

Beyond his verbal blunders, there was a hilarious series of articles and images in The Onion like the one atop this post to which Joe reacted to with good humor and then some.  A consequence is that these send-ups have burnished his image as a Joe Sixpack and further endeared him to reporters, who truth be known care less about a politician's world view than whether he's fun to cover.

Beau had been diagnosed with brain cancer in 2010, although that was not made public at the time. The cancer had been in remission during his two terms as Delaware attorney general.  In early 2014, he announced his intention to run for governor in 2016, but the cancer returned with a vengeance.

Joe's grief over the loss of Beau some 42 years after he had sat at the three-year-old's hospital bedside was absolute and extraordinarily public.  In an era of deep rancor between Democrats and Republicans, there was a bipartisan consensus that the vice president is a fine man, father and friend, and the grief emanating from the corridors of power was genuine.

Then, about a month later, in a carefully orchestrated series of leaks said to emanate from Joe's inner circle, it was reported -- first by Maureen Dowd of the New York Times and then by a widening circle of news media heavyweights -- that when Beau Biden realized that he would not survive his cancer, he sat down with his father and urged him to wage one more campaign for the White House, asserting that America would be better served by Joe's values.

Joe has done nothing to halt the leaks or knock down speculation, and it is said that some of his advisers are now counseling him on pursuing a four-state initial strategy -- Iowa, New Hampshire, South Carolina and Nevada -- that would be a gauge as to whether he could knock Hillary Clinton from her front-runner status.  He would be 77 at the end of a first term, and there is some chatter that he would promise to serve only one term, which would still make him the oldest of any president in history.

There is no delicate way to put this, so I'll come right out and say it: Joe's prolonged grief has been heart rending, but it may be that some of those advisers are using his grief to advance their own agendas.  I haven't a clue as to where Beau's stepmother, Joe's second wife Jill (whom I knew pretty well in the years before she and Joe remarried) stands on the matter.  But she may be key to what the final decision will be, as presumably would be his friend in the Oval Office.

As I have agonized over whether Joe should run and what I would tell him if I had an oportunity to do so, I was reminded of a 2010 essay on him by my friend Mark Bowden in The Atlantic, and one thing Joe said in particular:

"Look, I ran for president [in 2008] because I honest-to-God believed that for the moment, given the cast of characters and the problems of the country, I thought I was clearly the best-equipped to lead the country . . . But here's what I underestimated: I had two elements that I focused on, which made me decide to run. One was American foreign policy, and the other was the middle class and what's happening to them economically. If Hillary were elected or I were elected, and assume I did as good a job as I could possibly get done, it would have taken me four years to do what [Obama] did in four weeks, in terms of changing the perception of the world about the United States of America. Literally. It was overnight. It wasn't about him. It was about the American people . . . It said, these guys really do mean what they say. All that stuff about the Constitution, and all about equality, I guess it's right."

There are many reasons, some consequential and others less so, why I don't believe my beach volleyball buddy of yore should run for president.

Among them are that Clinton would be a far stronger Democratic nominee and be able to summon a coalition of supporters, including the party's deep-pocketed liberal elite, far larger than Joe would.  She would be something approximating a shoo-in to win the election, while Joe would not, and will be a worthy successor to Obama.  And their values, which was of such concern to Beau, are not dissimilar.  It really would be no contest, while Joe seemed to keep tripping over his own message when he ran in 1988 and 2008.  Would a third run be appreciably different?  Possibly, but perhaps only because the press corps digs him so much, and that affection eventually would fade.

But the most important reason is this: Joe always has made his own political fortunes secondary and those of country he serves first and foremost.  There is no reason to stop that now.

IMAGE COURTESY OF THE ONION
Posted by Shaun Mullen at 12:02 AM
Email ThisBlogThis!Share to TwitterShare to FacebookShare to Pinterest

I tend to agree, though I wouldn't rule him out as a fall back if the email server becomes the ugly cudgel it seems to be growing into, with ongoing litigation over it ultimately trampling her campaign effort. I know that sounds like letting the bad guys win (the same conspiracy that sought to sully her husband with Troopergate, etc.), but by now, I doubt the public would be as forgiving of her secretiveness, efforts to avoid transparency and possible security faux pas as they were of Bill's 'boys-will-be-boys' transgressions.
Should all that become a festering wound, I don't see Bernie stepping up to fill the breach, so who does that leave? The party may turn to Joe.
She may be a shoo-in by present polling, but among the Justice Dept. inquiry, Judicial Watch suits and GOP congressional panels, I'm not placing any bets yet.