Politix Update: The Virulent Cancer That's Eating Away At The Body Politic 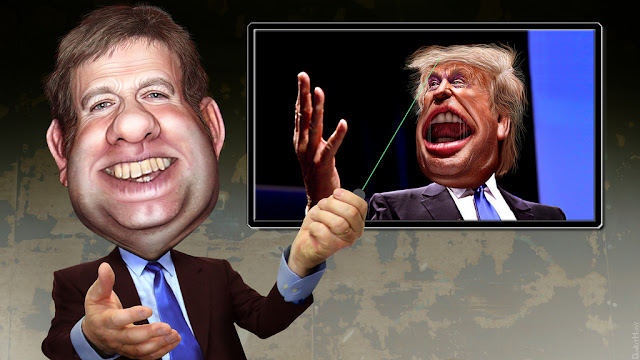 Scientists discover a new form of cancer.  After further research, they conclude that it attacks a wide cross section of adult Americans.  The cancer is highly virulent and threatens the body politic as it metasticizes.  It is dubbed acute trumpoma carcinoma, or Trumposis for short.

Scientists are unsure as to why Trumposis seems to be so contagious, but they have reached some tentative conclusions as they struggle to understand it:

* They vote Republican when they vote, which is not particularly frequently and sometimes not at all.

* If they see something on television, they believe it must be true, and many sufferers worship celebrities.

* Even though sufferers think they hate the super rich, they secretly worship their extravagant lifestyles.

* They are racist and nativist in outsized numbers and believe America was made for whites and should remain white.

* They are prone to hysteria and Nobody Understands Us convulsions.

* Although women would be seemingly more resistent to the disease's misogynistic strain, a surprising number of them swoon Gidget-like in its presence.

* Colonel Sanders and Sarah Palin are typical of their role models.

* The Wizard of Oz is their favorite movie.

* They believe that the Fourth Estate is a billionaire's mansion in Palm Springs.

* There is no known antidote, but sufferers often have short attention spans and eventually forget they are stricken.

There is some evidence that the prevalence of Trumposis is overstated, while some scientists say it is the cancer version of a summer fling.  Others say that just because Trumpiosis doesn't fit the model of cancers in general, it shouldn't be underestimated.

Still others report finding fewer cases of Trumposis than are reported in the news media, while some scientists take solace in their view that the methodology being used to track the disease is flawed and misleading.  They say descriptions of Trumposis as being a Frankenstein monster are so much hyperbole.

Besides which, as with other cancers, most people won't get Trumposis, and of those who do, some will recover.

HE CAN'T FEEL THE TINGLE

Politix Update has argued that Joe Biden should be planning for his retirement and not a presidential run.  We love the guy, and kind of know him as fellow Delawareans, but he would not be an improvement over Hillary Clinton and it's laurels-resting time for Joe after a long and distinguished public service career, not playing the underdog role anew.

The news media and and folks not enamored of Clinton want the vice president to run, and his every hiccup -- whether meeting with Elizabeth Warren or inviting political aides to yet another closed-door session -- has been closely watched as Bidenistas in favor of a run manipulate a willing media.  But all indications are that Biden will not run, mostly likely because wife Jill is against it.

"The more you look at the Biden bandwagon, it looks more like a ghost ship being pulled through the mist by a combination of hungry political reporters, Hillary haters (including most of the conservative media), and Delaware-based Friends of Joe who, of course, would love to see him run," writes Ed Kilgore at Political Animal.

The late Richard Ben Cramer, a former colleague and Biden biographer, wrote that when all was said and done, Biden relied on his instincts when it came to decision making, and if he didn't feel the time was right to make a big move, he'd tell his aides, "I can't feel the tingle."

China bashing is, of course, de rigueur for Republican candidates in the wake of its stock market crash.  But you have to hand it to Scott Walker, whose presidential campaign is looking ghost shipish itself these days, to come up with a brilliantly simple solution to the deeply complex problems wracking China and global financial markets.

It's pretty much impossible to nail down who the craziest Republican is these days with so much competition, but Maine Governor Paul LePage is making a strong case that it's him.

The beyond angry Tea Partier and all-around crackpot has already lost a major legal fight over his incompetence after he failed to veto 70 new laws he opposed and then declared he wouldn't enforce them, but now he's reached a new low in high comedy by demanding that a charter school withdraw a job offer to a leading Democratic political opponent or else lose its $530,000 state subsidy.

And so the impeachment clock ticks a little louder.

Presidential wannabe Ted Cruz is making a big stink over the Supreme Court being "one justice away" from ordering that crosses on tombstones at Arlington National Cemetery be removed.

Problem is, no one is asking the court to do any such a thing, although it did recently rule 5-4 to support the removal of a cross from formerly federal land in the Mojave Desert.  Crosses at Arlington and federal cemeteries are allowed because of the First Amendmen's guarantee of the free exercise of religion supports them and any other religious symbol requested by the deceased.

IS THERE ENOUGH HATRED TO GO AROUND?

When Rick Santorum is worried, then we're worried, too.

"I'm just really worried about all this focus on Mexicans and Mexico," he said during a press conference held at a Chik-Fil-A takeout joint in New Hampshire.  "How much room for hating the gays will Republican voters have if they're exhausted from hating Mexicans and other immigrants?"

Good stuff here. So tired of hearing about Trump and Biden.

Good analysis Shaun as usual. I had once thought Trump would crash and burn but now I'm not so sure. Carson will but not Trump. Even if he does I don't know who will fill the void.