Politix Update: Cruz Has GOP Hooker's Clients. What About Other Voters? 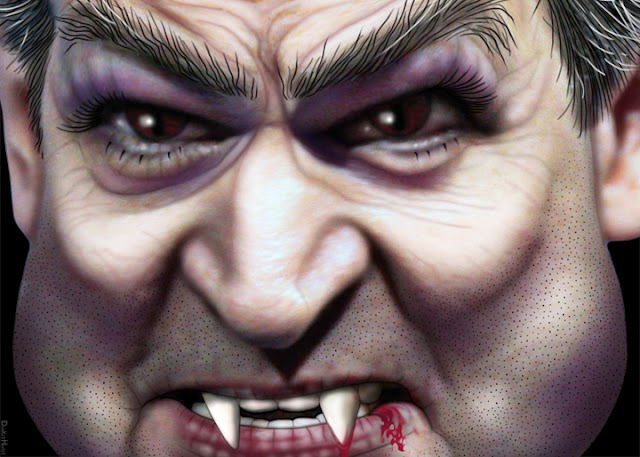 Politicians lie all the time.  They lie about big stuff and small stuff.  They lie when they don't have to lie.  Voters expect no less.  But when Ted Cruz recently called Senate Majority Leader Mitch McConnell a liar -- very publicly, in fact, and twice lest anyone had missed him the first time -- it was less a breach of some kind of honor-among-thieves code than further confirmation that the power struggle between the Republicans' restive right-wing base and its more establishmentarian elements had reached the highest echelons of a political party that is doing a pretty good imitation of coming apart at the seams.

The story of why the Grand Old Party finds itself in such straits on the eve of a presidential election year that seemed to hold so much promise after its successes in 2014 but now looms as yet another quadrennial embarrassment is by now oft told, at least by me and the relatively few other pundits who aren't blinded by the light.  A healthy political party thrives on and grows stronger from vigorous discourse among its ideological factions, but the GOP is terminally ill as a national political force because it has worked tirelessly to alienate anyone calling themselves Republican who believes in good governance, advocates vigorous intra-party discourse and does not march to reactionary drummer.

The Republican Party has become, to use an admittedly crude but accurate analogy, a streetwalker who turned her last big trick years ago and now bends over for anyone with the price of admission -- racists and white supremacists, creationists, gun nuts, misogynists and anti-abortion wackos, immigrant haters, birthers, homophobes and anti-intellectuals.  This is why the ascendancy of a vile paleoconservative piece of work by the name of Raphael Edward "Ted" Cruz, who is making a well financed run for the party's presidential nomination as the darling of the Republican doxy's gutter clientele, so unsurprising as to be inevitable.  And you thought Donald Trump was the big problem.

Well, Trump is a big problem, but the worst kept secret in politics is that this bombastic bloviator is unserious and has no interest in actually becoming president.  Cruz, who has been the lone wolf among the many Republican wannabes in not calling out the celebrity gadzillionaire for his racist rambling and slanders, is very serious about becoming president and believes he can.

Cruz is a demagogue and bully who demands ideological purity, and like demagogues through history, he uses lying like a deadly weapon.

Among Cruz's biggest lies are that Chuck Hagel was in the pay of Iran and other foreign adversaries to the U.S. during the future defense secretary's confirmation hearings.  That science does not back up human-caused global warming.  That Democrats threatened to shut down Catholic hospitals and charities if they didn't change their beliefs.  That jurisdictions with the toughest gun laws have the highest crime and murder rates.  That net neutrality will lead to government tyranny.  That President Obama was foreign born, never mind that Cruz actually was.

This Tea Party darling doesn't just relish confrontation, he demands it, a scary prospect for someone aiming to becoming commander in chief.  Immediately after his initial attack on McConnell, Cruz called in to the talk-radio shows of conservative icons Rush Limbaugh and Mark Levin to bait Republican leaders over their defense of McConnell.  Cruz's cage match with the feckless McConnell has the Inside the Beltway punditocracy clucking ("Will he try to rebuild his alliance with the majority leader?" asked one), but they miss the larger point: He is positioning himself as the true anti-entrenched establishment leader in the GOP field and doesn't need McConnell or other party leaders, whom he has taken to calling "girly men" and "the Washington Cartel."  At least he doesn't need them now, and judging from the cold shoulder he's getting on Capitol Hill, they don't need him either, which will be an interesting sidelight to the forthcoming Cruz-led effort to defund Planned Parenthood even if it means shutting down the government.

Significantly, Cruz began his presidential campaign, the first major Republican to enter the race, at Liberty University-- founded by the late Reverend Jerry Falwell-- in an effort to broaden his base by asking evangelical conservatives to consolidate their support behind him. "Today, roughly half of born-again Christians aren’t voting," he told them in yet another lie. "They’re staying home."

Cruz's strategy is to cherry pick supporters from other candidates in the crowded field while concentrating on the racist voter-rich Southern states early on, with Mike Huckabee and Ben Carson at the top of his hit list.  As a result, Mean Cruz seems to be rubbing off on Nice Huckabee, who in a play to the cheap seats now says if elected he wouldn't rule out deploying federal troops or the FBI to stop abortions. It doesn't really matter how well Cruz does in the first presidential debate on Thursday; after all, who's going to be able to get in a word edge wise with so many wannabes clamoring for face time while cowering in fear of The Donald.  Besides which, Cruz's supporters display the same kind of blind zealotry to him as do Trump's, as did the supporters of a certain supreme leader of a big country in Europe from 1933 to 1945.  And a memo to Scott Walker: You'd better watch your back, pal.

Does Cruz really have a shot at the nomination?  By most measures, he does not, but even in its early stages the 2016 campaign keeps throwing up surprises while defying the by now tired conventional wisdom, and it cannot be emphasized enough that Cruz's pro-nativism, anti-Washington rhetoric has tremendous appeal.  Cruz also has a staying power that Trump does not, witness those oleaginous Koch Brothers inviting him to strut his stuff at their Freedom Brothers conference for high rollers with big checkbooks this past weekend. (Trump was not invited.)

Things have gotten so bad in the Republican Party -- the streetwalker's mascara is so runny and her lipstick is so smeared, never mind the torn stockings and broken high heels -- that with the election still a distant 15 months away, there have been a flurry of commentaries by party insiders to the effect that the best thing that could happen to the GOP would be to get its ass kicked.  Typical is "The Moderate's Case For Trump: Only Trump Can Make the GOP Sane Again by Losing in a Landslide to Hillary Clinton" by Bruce Bartlett in Politico.  But isn't that kind of the same thing insiders were saying after first John McCain and then Mitt Romney got rolled by the Democrats in in 2008 and again in 2012?

Rand Paul is either a man bursting with fresh ideas who can expand the Republican Party's shrinking demographic reach by attracting younger voters or a man with nutty ideas that will marginalize his appeal as a presidential candidate.  Whatever Paul may be, he is not a prodigious fundraiser, and that's a big problem because the campaign is all about money.

The super PAC set up by the Kentucky senator's allies raised a paltry $6 million in the first half of the year, a far cry from the likes of Jeb Bush ($103 million), Ted Cruz ($37 million) and  Marco Rubio ($32 million).

The gloves are coming off early in the campaign and that is not necessarily a bad thing.

Hilary Clinton blindsided Jeb Bush late last week before a sympathetic audience of black movers and shakers at the annual National Urban League convention, labeling him as a hypocrite who had set back the cause of African-Americans in a biting attack that was greeted by enthusiastic applause.

Playing off of Right to Rise, the name of Bush's super PAC, Clinton said that "People can’t rise if they can't afford health care," a reference to Bush's opposition to the Affordable Care Act.

"They can’t rise if the minimum wage is too low to live on," she said, a reference to his opposition to raising the federal minimum wage.

"They can’t rise if their governor makes it harder for them to get a college education," she said, a reference to Bush's decision as Florida governor to eliminate affirmative action in college admissions.

When it finally was Bush's turn at the lectern and he lamely declared "I believe in the right to rise in this country,” the scent of political gunpowder was still in the air, as one reporter put it.

New York Times public editor Margaret Sullivan seems less than persuaded when Times editors from Dean Baquet on down tell her that the paper doesn't have it in for Hillary Clinton.  Sullivan took the unusual step of writing a second column on The Times' debacle late last month in reporting exclusively -- and incorrectly -- that Clinton was the subject of a criminal investigation into her use of a private email account while secretary of state.

"The history of the Clintons and The New York Times over the decades is like an airport baggage carousel -- with a difference. New pieces keep barreling down the chute, but none of it ever seems to get removed."

SMOKE 'EM IF YOU GOT 'EM

Marijuana advocates are on a roll.  (Ouch!)

In a little noticed action last week, the Senate Appropriations Committee voted 16-14 on an amendment to allow marijuana businesses access to federal banking services, a big deal that will help states like Colorado, where marijuana is legal, to fully integrate the evil weed into their economy.

SAY IT AIN'T SO, JOE

​Is Vice President Joe​ Biden actively exploring a possible presidential campaign or merely listening to close friends who are trying to prop him up as he continues to mourn the death of his beloved son, Beau, in May?

"He was so close to Beau and it was so heartbreaking that, frankly, I thought initially he wouldn’t have the heart," Michael Thornton, a Boston lawyer who is a Biden supporter, told the New York Times in a not-so-subtle effort to spin what might be nothing much at all into a stalking horse the feckless media is gladly riding. "But I've had indications that maybe he does want to-- and 'that’s what Beau would have wanted me to do.' "

My own view is in the unlikely event Biden decided to run, that almost certainly would be predicated on Clinton having to withdraw from the race for, say, health reasons.  If Biden was then nominated -- and the possibility that he would beat whomever the Republicans threw at him -- he would be 77 at the end of a first term, making him the oldest of any president in history.  That alone would seem to rule against run.  Meanwhile, Biden has been in Washington for 42 years and, one would think, is pretty damned tired of life in the public eye.