Politix Update: For Jeb!, Money Can’t Buy Him Love -- Or The Presidency 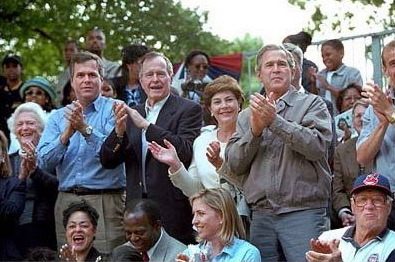 It's been a tough summer for America's two leading family political dynasties.  Hillary Clinton and Jeb Bush were once seen as locks on their party's presidential nominations, but Clinton's campaign is encountering rough seas, while Bush's campaign has never left port, although in the end -- and with the 2016 election still a distant 15 months away -- these dog-day travails may matter little to either candidate in the long run in this most unusual of political seasons.

No matter how you look at it, Clinton's problems pale in comparison to Bush's.  She has had unexpectedly tough opposition from Bernie Sanders while the possibility of a come-lately Joe Biden candidacy lurks in the shadows.  The controversy over Clinton's private email account when she was secretary of state, although much ado about not much, has become an inexhaustible supply of ammunition for her critics thanks to her own foot dragging, and her unfavorable ratings are the worst they've been in her nearly quarter century in national politics.

All that noted -- and that admittedly is a lot -- Sanders will fade, Biden will decide not to run, the email controversy will continue to become so much white noise for the simple reason that scandal will not override partisanship, and Clinton's ambitious and cleverly constructed populist message, chockablock with a goody bag of big ideas like her plan to make public college educations possible without student loans, will chug forward.

When taken in context, Clinton's unfavorables aren't so unfavorable. She, in fact, still holds as strong a position as any primary candidate in history at this juncture with an impressive list of endorsements from the party elite, tons of cash and policy views that mesh almost seamlessly with a broad and deep Democratic base that while perhaps not as enthused about her as it (twice) was about Barack Obama, will reliably turn out in huge numbers to support her. Consider this, as well: Clinton only needs Democratic votes to win, while neither Sanders or Biden are capable of building a coalition anywhere near as massive as hers.  And when taken in context, her unfavorables aren't so unfavorable.

Bush, by comparison is in a world of hurts, and while it's easy to blame a Trump by the name of Donald for that, the former Florida governor's problems were there all along.

Bush has found that money -- and he has raised much more than any other candidate from either party -- can't buy him love.  While the Republican elite was behind him from the outset, support from the party's fractured base was lukewarm even without the substantial distractions and message blurring that Trump has brought to the dance.  Bush has virtually no endorsements, even from moderates, and I'll be damned if I know what his message is even as someone who is paying close attention.

But the biggest problem Jeb! has is his last name.  While people either love or hate Bill Clinton, the lovers far outweigh the haters, and if the Mister keeps his baser instincts in check unlike his distracting performances during Hillary's 2008 primary run against Obama, he will be an immense help.  By comparison, it's hard to find any love for Bush's brother, George W., while there is a lot of . . . if not hate, animosity and outright fatigue.  Do you really think that Dubya will be showing up at campaign rallies to give his little brother a big hug to rapturous applause?

I admire, in principle, Jeb Bush's decision to confront his brother's legacy early on and therefore try to neutralize it, but his "major" policy speech last week on the Iraq war and ongoing conflagration in the Middle East was an unmitigated disaster that played well with no one beyond scattered hosannas for his "boldness" and "bravery."

Incredibly, Bush not only blamed Obama and Clinton for an ongoing mess that can be traced directly to his brother's capitulation to war-crazed neocons and subsequent serial ineptness that created the vacuum that ISIS has filled, but he barely alluded to that brother while proposing increased American involvement in Iraq, wading deeper into the Syrian civil war and backsliding into the kind of geopolitical tampering that got the older Bush into so much trouble and put the U.S. into a world of hurts.  At least he did not endorse torture, although later in the week he did say waterboarding was fine with him.

So while Hillary tries to soar with big ideas, Jeb! plods with no big ideas, unless you consider refighting the Iraq war big, while he hears the ever louder footsteps of John Kasich.

Then there's this: In 1988, George H.W. Bush sneaked by Michael Dukakis en route to the Oval Office not because he was the Great Conservative God's vice president, but because Dukakis was inept.  In 2000, George W. Bush stole the election from Al Gore, although I acknowledge many voters were ready for a change, and was re-elected in 2004 because John Kerry was inept.

Even when you acknowledge that Jeb Bush is doing the Romney Rumba (pretend to be conservative during the primary season and magically morph into a moderate afterwards) and he may eventually back into the nomination, it will have much less to do with his DNA than a party desperate for a body, even one as lukewarm as his.

The Republican presidential field was bound to start narrowing, and the initial round of culling is likely to include Rick Perry, Rand Paul and Rick Santorum. None will be abandoning ship anytime soon, mind you, because of PAC money, but Perry has stopped paying some campaign staff, Paul is struggling, period, and Santorum is losing staffers seeking greener pastures. ​

I actually feel a tad sorry for Perry.  The former Texas governor laid an enormous egg in the 2012 campaign, and in so doing squandered his most precious asset: Being able to brag, with some justification, of leading the Texas economy out of the doldrums because of robust jobs creation at a time when the national economy was still very much struggling.

But Perry got religion, or at least eyeglasses, studied hard and recently gave a stand-up speech on racism -- perhaps the best of any candidate of either party to date -- that accurately painted the GOP in an unflattering light while taking a shot at Democrats, as well.  Still, trying hard will not have been enough, and Perry found himself the odd man out at the first presidential debate and continues to sink.

These should be salad days, not dog days for Erick Erickson, the influential radio host, commentator and champion for conservatives who oppose the Republican establishment.

Erickson is a big reason the GOP has tacked deeply into right-wing extremism, but a funny thing happened on the way to the victory party: Donald Trump, who has become a powerful and, for the moment, unstoppable magnet for a rebellious conservative base that is eroding the party's chances to emerge triumphant in 2016 because of their anger over "cuckservatives," as they derisively hashtag conservative presidential candidates like Jeb Bush who in their view are not conservative enough.  (There is a similar but different anger among Bernie Sanders' supporters, but don't confuse the two because their only common trait is a craving for authenticity in candidates, which Trump has in spades even if he is an authentic clown.)

Writing at his popular RedState blog, Erickson writes that conservatives "have a real and legitimate reason to be pissed off at the GOP."

"But folks, this is anger at an unhealthy level. It is anger that has gone beyond the righteous anger of repeated betrayals from Washington. It is an anger that has become unhinged and is potentially uncontrollable. Anger at that level is more often destructive than constructive.

"But I know we cannot beat Hillary Clinton with this level of anger. We won’t be able to draw people to our side and our cause like this.

"I get the anger. I do. I am angry at the betrayal and the repeated lies from Washington Republicans who say they love children, but won’t even defund Planned Parenthood.

"I get the anger of voters who sent men and women to Washington to fight Obama only to give him a blank check and keep Obamacare funded.

"But I don't get this anger. If this is the anger that flows out of Trump supporters, I do not think it is sustainable. Yet it comes daily. It is poisonous to debate, to democracy, and to the soul itself."

PHOTOGRAPH FROM WIKIPEDIA
Posted by Shaun Mullen at 12:02 AM
Email ThisBlogThis!Share to TwitterShare to FacebookShare to Pinterest

I never got why anyone thought JEB was the inevitable nominee, or why anyone considered him the "smart Bush." To me, he seems like Dubya without the cheap pseudo-charisma- just as dumb and less likeable .