The Honeymoon That Never Was Is Over 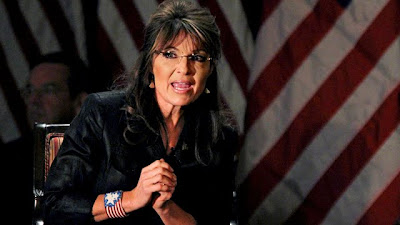 The conservative Republican honeymoon with Sarah Palin, now widely reported to be over, never really existed, a mere fig newton of the imagination of neocons with stiffies like William Kristol who believed that the former half-term governor "would change politics as we know it."

Even though many mainstream Republican's reacted in horror to John McCain's selection of Palin as a running mate in 2008, they reached for the Zantac and put on happy faces because while she was farcical she had a pulse and he didn't, making the chances of beating the Obama-Biden ticket somehow seem more plausible. And even though those self-same Repubs also reacted in horror to the coming of the Tea Party, they kept their happy faces on because Palin raised lots of money in supporting the Tea Party's cause during the 2010 mid-term elections, which they foolishly believed to be good for the future of a party that shrinks by the election cycle.

But now that Palin may be poised to run for president with the backing of Tea Partiers, the happy faces are secretly sharpening their knives because they know that as improbable as a Palin nomination might seem, a lot of Republicans are crazy enough to make it so and the result would be a disaster.

This is because no matter how you slice and dice the numbers, Palin could not even get elected governor of Alaska, a job that she abandoned in mid-stream to get rich while still keeping an eye on Russia from her kitchen window.

Not despite but because of her consume-thin resume, Palin has become one of wealthier woman in the U.S. with an estimated $15 million annual income. This windfall, amassed without breaking a sweat, is from Fox News and reality show appearances, ghost-written books long on padding, obscenely high speaking fees on the rubber chicken circuit, and a potpourri of smarmy and insulting Twitter and FaceBook comments that reveal an overarching ignorance of the very things that presidents need to know.

But while all of this in fact qualifies Palin to become president in the eyes of the relatively small number of Republicans who are thirsting for her to become the 2012 nominee, it is her chops as a man eater -- specifically the ability to cow what remains of the GOP establishment leadership -- that has greased the skids for a presidential run.

In the last few weeks alone, Palin has noshed on Ronald Reagan and both Bush pere and fils, among other party standard bearers, the Gipper for being an actor with suspect conservative credentials and the Bushes for being blue bloods.

It is the latter charge that Palin has honed to surgical precision in her Limbaughian efforts to define anyone who doesn't agree with her points of view as not being "real" Americans. There are some loopy ironies here.

While the Bushes were born with silver spoons in their mouths, Palin bought hers at Tiffany's. The Republican Party has gotten to where it is -- which is to say where it isn't as a national party capable of regaining the White House in 2012 barring a miracle -- by using the "real" American fault line as reliable crutch, although with Palin it's more like a harpoon gun.
George Will, who with the death of David Broder becomes the dean of Stating the Obvious in Washington, writes that Palin represents the death of ideas in the conservative movement with her empty brand of populism:

"This would be a problem for the movement. For conservatism, because it is a creedal movement, this is a disease to which it is susceptible."

Asked if the Republicans would remain a party of ideas if Palin captures the nomination, Will said: "The answer is emphatically no."