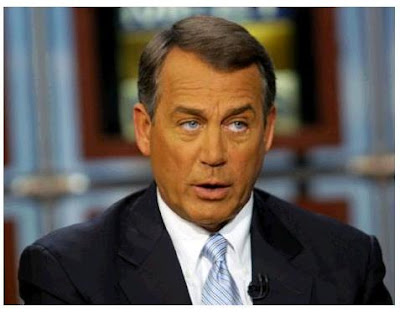 I feel as though I'm watching one of those controlled, slow-motion car crashes. Only instead of a dummy, inside there are 87 GOP House freshmen who have no idea -- no idea at all -- what's about to happen to them.
~ PETER ROBINSON
I have been trying to avoid overexposure to the sausage factory known as The Greatest Deliberative Body In The Universe, aka the U.S. Congress, and the story of the moment, which is the sorry job House Speaker John Boehner is doing. Until now.

Boehner may be the worst House speaker since Tom Foley in the early 1990s and in an astonishingly short two months has made former Speaker Nancy Pelosi seem like a fricking genius, if not exactly on par with the great speakers of the mid-20th century -- Sam Reyburn, John McCormick and Tip O'Neill. (Sorry Carl Albert, you don't make the cut).

Boehner, he of the perpetual tan and on-cue tears, signed himself up for what he surely knew would be an impossible job: Leading his own party, which has a comfy 49 vote edge over the Democrats but has fractured every which way and chockablock with freshmen who owe him nothing, while trying to keep over-the-top campaign promises amidst a budgetary crisis that is all but unsolvable without making cuts in the programs that restive anti-big government voters nevertheless demands be spared.

Being a Republican these days is thinking you can have it both ways and never having to make tough decisions (as well as never having to say you're sorry), which puts Boehner in a difficult position: In order to get a budget compromise through the House that will pass the sniff test in the Senate, he almost certainly has to piss off members of his own party and appease Democrats, thereby undermining his already shaky credibility.

The alternatives are not pretty: Shut down government or hand over his gavel to Michele Bachmann, who inexplicably was snubbed for any and all leadership positions despite her sound thinking and fiscal acumen.

House Speaker Newt "Patriotic Stiffy" Gingrich and his fellow Republicans found to their chagrin that the government shutdown they engineered in late 1995 during a not dissimilar fiscal crisis did not play well in Peoria, where people were discomfited when their Social Security, veteran disability and other checks stopped coming, nor up Pennsylvania Avenue at the White House, where Gingrich got played like a cheap violin by Bill Clinton.

Boehner probably should be less concerned about Barack Obama, but he must wonder what Bachmann's heel marks would look like on his forehead.

This is because Boehner, in what most parliamentarians would call wise but Republicans would call despicable, has broken the First Republican Commandment -- Thou Shalt Not Negotiate With the Opposition -- and is in behind-the-scenes talks with moderate House Democrats to trim $30 billion from the sails of the ship of state. (While I'm iffy at math, that falls $70 billion short of what Boehner promised on the rubber chicken circuit and 31 billion short of what is being demanded by those feckless freshman Republicans.)

Boehner probably will keep his speakership, but don't be surprised if he takes to wearing big hats to cover up those heel marks.