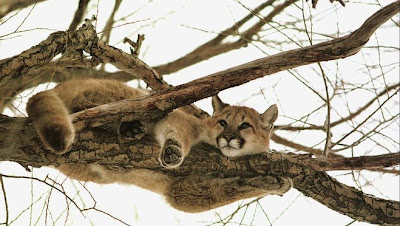 With the last confirmed sighting in 1938, the federal Fish and Wildlife Service has declared the reclusive eastern cougar to be extinct and recommended that it be removed from the agency's endangered species list.

But there is an asterisk. Or two.

While they are not confirmed, there are fairly regular sightings of the cougar in its historic range from eastern Ontario and Michigan eastward to Maine and southward to Georgia, but that may not matter.

Scientists have all but concluded that the eastern cougar was erroneously classified as a separate subspecies in the first place. As a result of a genetic study conducted in 2000, most biologists now believe there is no real difference between the western and eastern branches of the cougar family.

"It's extinct," said Mark McCollough, a wildlife biologist with the Fish and Wildlife Service in Maine.

"But it's not," he confirmed. "It may well return to part of its range."

Indeed. There is evidence that cougar populations from from the West are following the eastward migration of the coyote. Some have settled in the Dakotas, while at least one breeding pair is now in Nebraska.

The reclusive animals -- also called pumas, catamounts and mountain lions depending upon the region, were hunted nearly to extinction by European settlers in the eastern U.S. starting in the 1700s, and states put bounties on them to protect livestock.

Martin Miller, the chief of the endangered species division in the service's Northeastern office, notes that many sightings in the East have been determined to be cougars from the West or South American pumas that were imported as pets and then released.

The eastern cougar was listed as an endangered species in 1973, but the federal government did nothing to try to help it recovery through captive breeding or other programs.

Hmmmm-interesting. I don't remember hearing that they went extinct before. Or not.