Book Review: Korda's 'Hero: The Life And Legend Of Lawrence of Arabia' 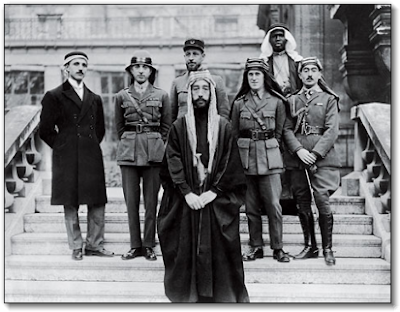 Lawrence (to Prince Feisal's left) at 1919 Paris Peace Conference
What that Thomas Edward "Ned" Lawrence were alive today to see the changes sweeping the Middle East. While the man known as Lawrence of Arabia seldom showed emotion, he probably would allow himself a smile although, as a teetotaller, 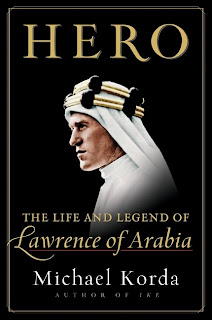 not a celebratory toast.

Lawrence led the Arab Revolt against the Ottoman Empire during World War I and was the pivotal figure in the first wave of the liberation movement in which Arab peoples liberated themselves from the Turks and then other colonial powers. It is the second wave of the movement, this one toward democracy and human rights, that is playing out today in Egypt, Tunisia, Yemen, Libya and elsewhere.

The tragedy of Lawrence's short life (he died at age 46 in a motorcycle crash) is that even as he was leading the Arab Revolt, Britain had secretly negotiated the odious Sykes-Picot Agreement with France and the assent of Imperial Russia that defined their respective post-war spheres of influence in the region. (Map, below left.)

And that even though these peoples had liberated themselves with Lawrence's considerable help, they were subjugated by homegrown domination, sometimes theocratic and sometimes military-led, with imperialist foreign influences lurking in the shadows, later too often those of the U.S. as was

infamously apparent in Iran with the fall of the Shah in 1979.

Early in the revolt, Lawrence's "goals were already compromised . . . by a moral dilemma: leading the Arabs into battle for lands that the Allied powers had already decided they were not going to get," write Michael Korda in the recently published Hero: The Life and Legend of Lawrence of Arabia, perhaps the 60th autobiography of Lawrence but the first in my estimation to argue convincingly that the map of the Middle East looks much as it does today in large part because of this great man's brilliance in strategy, diplomacy and politics.

Lawrence's three-year leadership in the Arab Revolt is summarized in extraordinary detail in his Seven Pillars of Wisdom (1922), a beautifully written (and occasionally overwritten) tome. It has been studied -- and often forgotten -- by succeeding generations of battlefield commanders in Malaysia, Vietnam, Iraq and most recently Afghanistan, confronted by guerrilla warfare, which Lawrence described as "more of a gas than a solid." 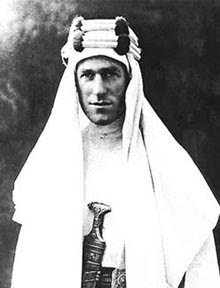 Lawrence succeeded in what he set out to do because he simply did not know how to fail. He also had the good fortune to encounter and win over a succession of excellent mentors -- historians, archaeologists and Arab linguists -- during his high school, college and post-college years before the war who all, in their own way, helped him anticipate his future.

"One who sets the apprentice hero on the correct path and furnishes him with the knowledge and the weapons he will need, and who, above all, points to the great task that lies at the end of the many trials and errors," as Korda quotes Joseph Campbell in the mythologist's writings on the development of the hero.

While many of his superiors in the tradition bound British Army thought Lawrence an eccentric poseur and pop-off, any many of them were driven to distraction by his instance on wearing the Arab kufiyya (head cloth) instead of the tailored uniforms that other officers wore, the superiors who supported him understood his 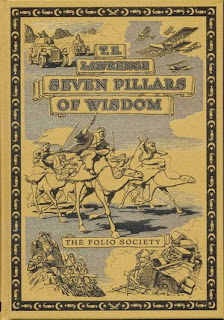 near-genius intellect, asceticism, deep knowledge of the desert, its peoples and their language, willingness to endure unspeakable hardship and pain (including being beaten and raped by Turks), his great abilities with firearms and explosives, and most of all that he was a visionary.

Those supportive superiors always seem to come on stage when Lawrence faced being sent back to a desk job in Cairo. Chief among them was hulking General (later Field Marshall and Viscount) Sir Edmund Allenby (below, right), who was sent out from London to take over the failing British mission in the Middle East and could not have been more different than the diminutive (five-foot-five-inch) acting staff captain.

"Since Allenby was, among other things, famous as a stickler for perfection in every detail of military uniform, regardless of rank, that he too saw in Lawrence and this unusual garb and opportunity, rather than merely a young staff officer in need of a 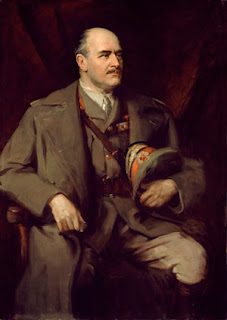 stern lecture on the dangers of 'going native.' As for Lawrence, although he had not been greatly impressed by (predecessor) generals Maxwell and Murray, and occasionally made fun of them when he thought he could get away with it, has was instantly impressed, even overawed, by Allenby."

But it was with the Arabs (who called him "Aurens'), and notably Feisal bin Hussein bin Ali al-Hashemi (below, left), a Hashemite emir who shared Lawrence's vision of creating an Arab state that would include Syria and Iraq, that he forged the closest ties.

"[At their first meeting] Feisal took in Lawrence's admiration for his own person, his unusual knowledge of Arab ways, his lack of racial prejudice toward Arabs, and his undisguised enthusiasm for the Arab cause; but Feisal was cautious by nature, not impulsive, except in the heat of battle, and he cannot initially have been sure why this young Englishman had been sent to him. Yet Feisal came 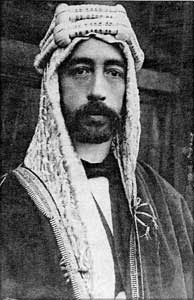 quickly to feel affection, trust, and respect for Lawrence, and from the first instant was encourage by his arrival . . . "

Lawrence's brilliance as a strategist is all the more incredible because he did not benefit from a Sandhurst education, nor did he need one.

"Those who think of Lawrence as merely a dashing guerrilla leader overlook the originality of his plan [to sweep the Turks out of the Middle East] and his capacity for detail. He compared 'camel-raiding parties' operating on the border between cultivated land and the desert to ships, able to attack at will and by surprise, then break off the fight and retire into the desert, where the Turks could not follow them.

"He hit on the essential advantage of the guerrilla: 'tip and run' tactics, 'using the smallest force in the quickest time, at the furthest place." This would of course negate the Turk's superiority in numbers and heavy weapons -- a lesson that would later be 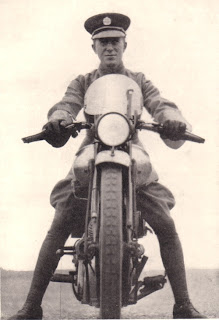 put to good use by the British . . . in the Libyan Desert in World War II (as well as by Mao in the Chinese civil war, and by the Vietcong in Vietnam)."

Although his exploits were thousands of miles from the Western and Eastern fronts, Lawrence would go on to become perhaps the most famous hero of World War I who, as Korda writes, did nothing less than "set in motion what rapidly would become huge changes in one of the most volatile areas of the world -- ones that still are being fought over today"

* * * * *
"Anyone who had, like me, pushed through to success a rebellion of the weak against their master, must come out of it so strained that nothing in the world would make him clean again," wrote Lawrence, and this in essence was the feeling that would motivate him through the rest of his life. 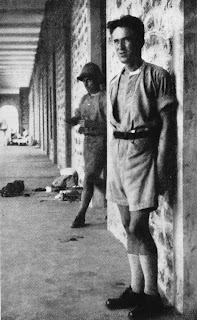 Lawrence, of course, was far too hard on himself because it was the British government that failed the Arabs at the Paris Peace Conference, which opened in January 1919 and sputtered on for more than a year, and again after Lawrence, Feisal and the Zionist leader Chaim Weizmann drew up a remarkable document that was the first attempt to define the relationship between Arabs and Jews in Palestine.

Feisal and his brother Abdullah later took the thrones of semi-independent Arab states because of Lawrence's patient diplomacy, but that was a far cry from the dream that the three had long shared.
* * * * *
Some critics have said that Hero is too long at 702 pages, while other complain that it takes 113 pages before Korda rewinds to Lawrence's childhood. Both concerns are baloney, and what makes Hero a preeminent biography is that Lawrence's exploits in those opening pages give his earlier life -- as well as the lifelong conflict between he and his suffocating mother, whom he wanted to see as little of as possible -- 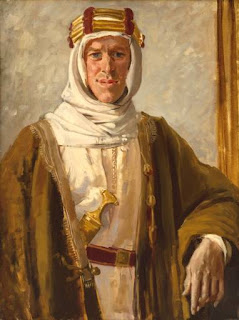 I have only two complaints about Hero, one very small and one very large:

Korda could not introduce a character of consequence without stringing honorifics out behind their name (ie., "Sir Henry Rawlinson, GCB, GSI, GCVO, KCMG"), which is a bit rich since Lawrence refused every award offered him and ignored the ones that were not withdrawn after his refusals.

My other complaint is the highly aggravating fact that the maps in Hero are crude, and with one exception, the strategies and extraordinary flanking movements that Lawrence employed to catch the Turks unawares are pretty much left to the reader's imagination.

What a good reminder to me...I have a 1938 edition of "Seven Pillars of Wisdom" and this would be a good time to commit to a complete reading of it, before searching out the new bio of Lawrence.