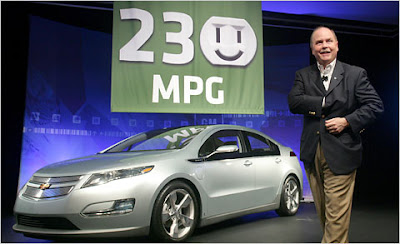 To say that the Chevrolet Volt is the most anticipated new car in recent Detroit history is an understatement. How well the vehicle sells will speak volumes about the long-term viability of General Motors, which while technically out of bankruptcy is still not out of the woods as it struggles to present a cutting edge face while trying to get back some of the market share it squandered over years of shabby leadership and even shabbier vehicles.

A key GM claim about the Volt -- repeated over and over during the long gestation of the vehicle -- is that it while it will cost a pricey $41,000 before rebates and other incentives, it gets a super-duper 230 miles to the gallon.

Well, depending upon your point of view, that claim is jump-the-shark hyperbole or an outright lie. And at the least requires some semantic dexterity.

This is because the Volt is actually two vehicles: In "EV" Mode, it drives on pure electric energy, although only for a measly 30 miles, while in "CS" (Charge Sustaining) Mode, its 1.4 liter engine (which requires premium gasoline) generates electricity and under certain circumstances sends torque directly to the wheels. (The Toyota Prius and other so-called parallel hybrids vary continuously between electric and gas drive.)

In any event, this makes the 230 mpg claim extremely misleading, and GM has been getting a well-deserved drubbing in the automotive press.

This is because combined miles per gallon numbers from a trip using both EV and CS modes depend entirely upon the length of the trip. If, for example, a trip lasts five miles longer than the EV range (say, 40 miles in EV mode and five miles in CS mode), and the car returns 50 mpg over those last five miles, it will have burned one tenth of a gallon for the entire trip, resulting in an average miles per gallon of 450 mpg. But if you charge the car’s battery once (giving another hypothetical 40 miles of EV range) and then drive 450 miles (410 of which burn gas at the hypothetical rate of 50 mpg), you'd be lucky to get 55 miles per gallon for the trip.

Meanwhile, several publications have calculated the Volt's miles per gallon numbers at well below 55 mpg. Car & Driver, for example, calculates a range of between 26 and the upper 30s in EV mode and 35 mpg in CS mode, and any effort to combine the two would require Enron-like accounting methods. Motor Trend, which has reliably remained a Detroit lap dog through thick and thin, disingenuously concludes that the Volt "is as efficient as you want it to be."

The market place consequences of GM's long-time claim that the Volt is "full electric" when it clearly is not are likely to be minimal. The real test will come when initial buyers share their real-world experiences with potential buyers.