Science Sunday: Universe-Wise, Why Is There Something & Not Nothing? 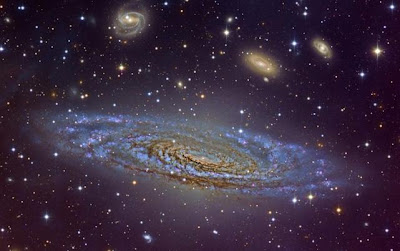 Two things are infinite: the universe and human stupidity, and I'm not sure about the universe.
~ ALBERT EINSTEIN
There is no bigger question than why there is something rather than nothing, which of course accounts for why you are reading this installment of Science Sunday with your morning coffee.

Michael Shermer, a college professor, prolific author and publisher of Skeptic magazine, provides a nuanced -- and for the most part testable -- series of answers to that question in a post at Big Questions Online. Herewith a condensed version with apologies to Mr. Shermer.

(1.) GOD
The theis'’s answer is that God existed before the universe and subsequently brought it into existence out of nothing. But this collides with the Judeo-Christian tradition and scientific worldview, so God would have to exist outside of space and time.

In order to answer the big question, we need a comprehensive theory of physics that connects the subatomic world described by quantum mechanics to the cosmic world described by general relativity. If someone asks you what really happened at the moment of the purported Big Bang, the only honest answer would be: "I don't know."

Our universe may be just one in a series of boom-and-bust cycles of expansion and contractions of universes, with the current iteration just one "episode" of the collapse and re-expansion in an eternal cycle.

Our universe may be just one of many bubble universes with varying sets of laws of nature. Universes like ours give birth to baby universes with those same laws of nature, some of which develop intelligent life smart enough to discover the Darwinian process of cosmic evolution.

Our universe may have sprung into existence from a bubble nucleation of spacetime. If so, then there may be multiple bubble nucleations that give rise to many universes that expand but remain separate from one another without any causal contact.

According to the many worlds interpretation of quantum mechanics, there are an infinite number of universes in which every possible outcome of every possible choice that has ever been available, or will be available, has happened in one of those universes.

A multi-dimensional universe may come about when three-dimensional "branes" -- membrane-like structures on which our universe exists -- moves through higher-dimensional space and collides with another brane, the result of which is the energized creation of another universe.

Universes are created out of nothing, but in the scientific version of ex nihilo the nothing of the vacuum of space actually contains the theoretical spacetime mishmash called quantum foam, which may fluctuate to create baby universes.

This theory is based on the assumption that our brains form models of the world from sensory input, that we use the model most successful at explaining events, and that when more than one model makes accurate predictions we are free to use whichever model is most convenient.

"In the meantime, in answer to the question Why is there something instead of nothing?, it is okay to say 'I don’t know' and keep searching. There is no need to turn to supernatural answers just to fulfill an emotional need for certainty and comfort. Science's uncertainty is its greatest strength. We should embrace it."