Science Sunday: So There's An Earth-Like Planet, But How The Heck To Get There? 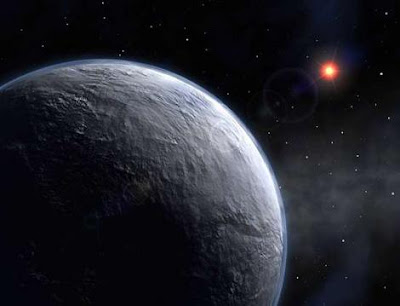 Whose imagination isn't fired by the notion that there may be Earth-like planets out there?

Okay, so what if things get really weird on Terra Firma and we'd like to visit Gliese 581 g? Is that possible?

Only by bending the laws of physics.

"Unlike crossing the Atlantic or putting a man on the moon, interstellar travel isn't an engineering problem; it's a physics problem," writes Brian Palmer in Slate. "Scientists have given up on the idea of traveling to distant solar systems through anything resembling traditional means."

For one thing, it would take far too long.

Palmer explains that current space shuttles don't go much faster than 17,500 miles per hour, a pace that would take 766,000 years to get to Gliese 581 g -- more than three times longer than we've been hanging around on our own planet.

And even if we had the technology to go faster, the energy considerations are daunting. If we wanted to get to Proxima Centauri -- the second-closest star to Earth at a mere 4.22 light-years away -- within a century on conventional propellant, the space vehicle's fuel tank would have to be larger than the visible universe. As a consequence, astrophysicists are focusing on technology that would permit shuttles to travel faster than light, without fuel, or both.

Current ideas for pulling off this trick include technologies familiar to Star Trek fans, including laser sails, warp drives, and wormholes.

Laser sails, says Palmer, are the most technically feasible option:

"When a beam of light strikes an object, it exerts a small amount of force. In a vacuum environment, like space, the force can drive an object forward. If we gave a space ship enough jet fuel to put it into outer space, we could shine a laser beam on its reflective sail to move it farther and farther away. In theory, we could push it all the way to Gliese 581 g."

Alas, this concept has serious limitations. Even a laser beam loses focus over great distances, and even if it got to Gliese 581 g, there would be no way to slow it down.