Who Would Jesus Have Tortured? 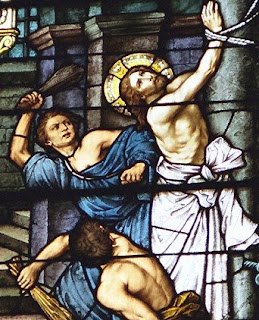 The smell of autumn is in the air on this Sunday morning, that intoxicating aroma of decaying leaves, ripe apples and bedewed grass brilliantly illuminated by the sun in a cloudless azure blue sky. But there is another smell as well and it is not so sweet – the smell of hypocrisy as the faithful file into a fundamentalist Christian church near Kiko's House for their weekly dose of God.

There they are, the fathers in their starched shirts and mothers in their best dresses, their two and a half children in tow, as I pedal by on my daily bike ride and take note of all of the bumper stickers in support of George W. Bush and the troops in on their SUVs and pickup trucks.

Now hypocrisy is a strong word, so I had better explain myself lest the Big Guy unleash a thunderbolt and knock out my hard drive before I can post this.

In researching my commentary yesterday titled Sic Semper Tyrannis: The Blackest of the Bush Administration's Black Marks on the White House's sick embrace of torture, I noticed that the so-called fundamentalist, faith-based Republicans who make up a goodly portion of the president's political base have, with damned few exceptions, been silent.

You can read the Christian Bible in any number of ways, but it is a stretch to say that torture is endorsed. Its use as a tool of war is a sin. Period. And to be silent in the face of its use is to condone its use.

It's not that fundamentalists cannot find their tongues. Why just the other day a bunch of them declared that the greatest threat to is not gay marriage, flag desecration or even abortion. It's anime.

The president has suffused his tenure with eschatological underpinnings, and nowhere more so than in the Global War on Terror and its wicked stepchild, the war in Iraq.

These wars are promoted as a kind of modern-day Crusade, if you will, against the predominate people of the Holy Land and environs whose religion we are told is shot through with darkness, ignorance and anger. In short, Islam is a threat to Christians everywhere.

Evangelical religious organizations are among the very few to break with the president on torture, but in doing so have made it clear that they are with him on the war.

When the National Association of Evangelicals endorsed a "zero tolerance" declaration against torture earlier this year, the Reverend Richard Cizik, a leading voice in the organization, noted that the statement was not intended as a criticism of the Bush administration.

"There is a perception out there in the that we're willing to accept any action in order to fight this war against terrorism. We are the conservatives — let there be no mistake on that — who wholeheartedly support the war against terror, but that does not mean by any means necessary."

As I wrote in a post about Bush’s religiosity, a great thing about that Christian Bible is that it is like a big vending machine with pastries, cakes, candy, chewing gum and breath mints. There is something in it for almost everyone, so it's useless to quote from it in declaring that George Bush is a sinner or a savior.

And I'm not saying, as did Luke, that we should love our enemies.

I happen to worship at home and my God is a little bit of everyone else's. World travel will do that to you. But it does say in my Bible that if you plant ice you're going to harvest wind.

No matter who your God may be, as far as I’m concerned George Bush has earned the wrath of his, which makes the silence of his flock over his most un-Christian embrace of torture so deafening.

Posted by Shaun Mullen at 11:36 AM
Email ThisBlogThis!Share to TwitterShare to FacebookShare to Pinterest

As someone who is a Catholic Christian (albeit an irreverent one) I find this all an abomination.

It is a disgrace and so un-Christian.

What a great post; I've been away for a week (Barcelona) and just catching up on blogs.

Yes, you are correct, that travel changes your world view. In my view of religion there is a very big table and all, I mean all are welcome.

Can you imagine if GWB had ever visited the middle east just to experience or learn?

Who am I kidding? I am just grateful that I have had these chances, which are gifts.

Here is my opinion of the political scene and the Christian Right:

I see another abuse scandal coming- it isn't sexual, but its activity parallels in harmfulness

It was difficult enough when the Catholic sexual abuse scandal came out. People who were supposed to be the most trusted took sexual advantage of children. To made matters worse parishioners knowingly covered it up.

In the Catholic Church, Protecting God's Children, a program to educate about the signs of abuse was made a requirement for anyone working around children. The program was designed to help educate about sexual abuse and what signs to look for in the victim and the abuser. That should have been the end of things, but another form of abuse and cover up crept actively into Christianity. It was psychological abuse.

As a result of these viewpoints, two very, very different psychological abuse patterns have escalated in society.

First, instead of looking at the behavior and actions of homosexuals and abortionists as a manifestation of a past abuse, similar to the actions of those abused who were mentioned earlier, many are unable to look beyond the signs – drinking, drugs, sexual promiscuity, suicide, homosexuality, and abortions to face the initial psychological abuse as the cause. When the abused victims act out their suffering they get abused a second time, this time by people trying to cleanse society.

The second is an entirely different perspective. Rather than looking at homosexuality and people of the Muslim faith as a difference to be accepted such as people of the Jewish faith or people with black skin color, the natural difference whether it is skin color and sexual orientation or the freedom to hold a different religious belief, the difference is seen as the problem. When this difference becomes a strong focus a segregated society and all the problems that go with it is created.

A new path needs to be taken because these two patterns only foster additional turmoil. An inspiring model is the way the Catholic Church successfully faced their issue and brought about a healthy openness and awareness of sexual abuse and prevention through the Protecting God's Children program. Christianity as a whole needs to adopt a similar method to bring about a healthy openness and awareness of psychological abuse, its consequences, and its prevention.