Iraq: Charge of the Lightweight Brigade, A Gift That Keeps on Giving & Other News 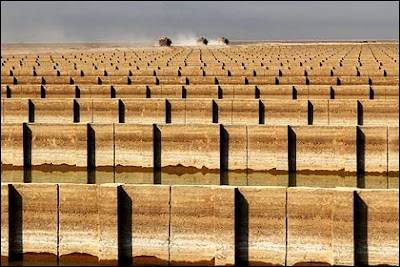 Warrior armored vehicles on a rare foray from British base
In what the Daily Telegraph describes as "a spectacular U-turn" but I would call just plain pathetic, the British Army has figured out how to keep its soldiers from getting killed in Basra, a once relatively peaceful southern Iraqi city hard by the porous border with Iran that is now considered to be more dangerous than Baghdad.

In a solution that should send the Duke of Wellington spinning in his grave, the British have promised to stay out of the city in return for assurances that its forces won't be attacked by Shiite militias.

"Since withdrawing, the British have not set foot in the city and even have to ask for permission if they want to skirt the edges to get to the Iranian border on the other side. . . .

"The British appear to base their new strategy on an almost total faith in one man, Gen Mohan al-Furayji, who came down from to take over responsibility for security, promising to sort out the city. The general, a Shia in his early fifties who spent time in the notorious Abu Ghraib prison in after falling out with Saddam Hussein in the 1990s, is answerable only to Nouri al-Maliki, the Iraqi prime minister."

The Brits have had a rough year with 44 troopers killed to date, and at this point are pretty much confined to base. They long have said that they would hand over control of province to the Iraqis when their forces are capable of taking control, but it is going to take more than some sorting out before that happens.

Chamberlain reports that those Iraqi forces are unwilling to take on Shiite militias, let alone the death squads that roam Basra that often are indistinguishable from the militias .

The stakes are huge because of the oil riches in the region and its proximity to , which probably is arming the death squads, among perpetrating other mischief.

But a larger question looms:

Is Basra a template for what will happen when American forces are eventually withdrawn from other hot spots?

Will the transitory military progress in , which has been undermined because there has not been a concomitant political progress, be replicated elsewhere?

Does this spell doom for the much-vaunted Surge?

In the run-up to the March 2003 invasion, Chalabi provided officials with a stream of reliably inaccurate or exaggerated intelligence about Iraq's WMD program and ties to terrorism.

Not bothering to find out for themselves, it was pretty much because of the say-so of this discredited Iraqi pol that the Bush administration declared that everyday Iraqis would greet American troops as liberators and those troops would be home by Christmas.

Despite Chalabi having made a mess of pretty much everything he has gotten his clammy hands on, his deep White House and Pentagon ties have landed him yet another assignment.

McClatchy Newspapers reports that his latest job is:

"To press 's central government to use early security gains from the surge to deliver better electricity, health, education and local security services to neighborhoods. That's the next phase of the surge plan. Until now, the military, various militias, insurgents and some backed groups have provided those services without great success."

Prime Minister Nouri al-Maliki has named the resilient Chalabi as head of the Services Committee, a consortium of eight service ministries and two municipal posts, that is tasked with bringing services to .

Chalabi "is an important part of the process," said Colonel Steven Boylan, a spokesman for General David Petraeus. "He has a lot of energy."

One of the bitter ironies of the war is that introducing a Western-style democracy to a once subservient people would have been a good thing. But then it turned out that the American teachers scorned the rule of law.

In yet another example of this perverse dynamic, State Department investigators looking into the shooting deaths of 17 Iraqis in last month offered immunity deals to Blackwater security guards.

The New York Times reports that the investigators did not have the authority to offer such grants, which represent a potentially serious investigative misstep that could complicate efforts to prosecute Blackwater employees involved in the incident.

THEY'RE NOT THE CORLEONES, BUT . . .
I wondered the other day what will happen in Fallujah, a once bustling city that is now more locked down than , after troops depart. I suggested that although there are many uncertainties and the Bush administration has tried to suspend belief for the past four and a half years, it has been unable to suspend the laws of nature.

And that it is no secret that nature abhors a vacuum.

General David Petraeus, noting that Al Qaeda in has been severely crippled because of the Surge, offers a sneak peek of one vacuum filler:

Criminals have established an "almost mafia-like presence" in some areas and pose a dangerous new threat.

'SEARCH AND AVOID'
Iraq war veterans from the 10th Mountain Division, which has seen some of the heaviest fighting, say that morale in-country is so poor that many soldiers are simply parking their Humvees and pretending to be on patrol, a practice dubbed "search and avoid" missions.

Phil Aliff, now back at Ft. Drum, New York, says that his unit’s mission was to help the Iraqi Army "stand up" in the Abu Ghraib area of western Baghdad, but in fact his platoon was doing all the fighting without support from the Iraqis they were supposedly preparing to take over.

"We were hit by so many roadside bombs we became incredibly demoralised, so we decided the only way we wouldn't be blown up was to avoid driving around all the time.

"So we would go find an open field and park, and call our base every hour to tell them we were searching for weapons caches in the fields and doing weapons patrols and everything was going fine. All our enlisted people became very disenchanted with our chain of command."


MISSION UNCCOMPLISHED
For the past year, Kiko's House has run a monthly recap of Iraq war casualty figures.

No more. This is because, to a welcome extent, some of those once awful figures have dropped precipitously, but to a greater extent because the U.S. and Iraqi governments have clamped down so completely on the dissemination of combat-related stats that reliable ones are pretty much impossible to come by.
Posted by Shaun Mullen at 5:00 AM
Email ThisBlogThis!Share to TwitterShare to FacebookShare to Pinterest

Oh God, it just keeps getting worse and worse. Please check out the "comic" strip at franiam...it says it all.