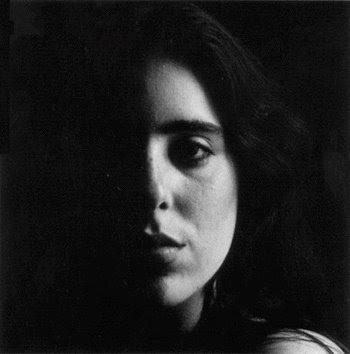 I have no idea of the color of Laura Nyro's eyes, but she was the first exemplar of blue-eyed soul that I heard and remains one of the finest despite a career largely spent in the shadows by her own choice and that ended prematurely with her death in 1997.

Blue-eyed soul is a term used to describe R&B or soul music performed by white artists, which was an anomaly for this teenager in the mid-1960s. My musical tastes ran from classical to jazz to rock with a special fondness for brown-eyed soul, especially the stable of Motown artists then ascendant, including The Supremes, Temptations and Martha and The Vandellas.

One day I was visiting a friend and she put a record on her stereo. (Or maybe it was her mono.) The singer was obviously white and I incorrectly assumed was Jewish judging from the fetching photo on the dust jacket, but her delivery was deeply soulful, and maybe just a little jazzy, as she sang:

The song was "Stoned Soul Picnic." I was smitten and for a while had a crush on Nyro, who I swear could sing a sigh. I rushed out and bought the album, Eli and the Thirteenth Confession, then the following year the darker New York Tendaberry.

Nyro, who would have celebrated her 60th birthday today, was ambivalent as a performer and uncomfortable in the limelight, but was prolific as a songwriter in the finest tradition of Tin Pan Alley. She recorded only intermittently after 1969, made relatively few appearances, and the bulk of her catalogue is rereleases and compilations.

But boy did she write!
* * * * *
Laura Nigro was born in the Bronx to Italian parents -- a bookkeeper mother and piano tuner and jazz trumpeter father. Before she was 10 she had taught herself piano and was writing poetry and composing songs. She credited attending Sunday school at the New York Society for Ethical Culture with providing the basis of her musical education, and she also attended 's famous and Art.

While in high school she sang with friends in subway stations and on street corners in the finest doo-wop tradition.

"I would go out singing, as a teenager, to a party or out on the street, because there were harmony groups there, and that was one of the joys of my youth," she said. "I was always interested in the social consciousness of certain songs. My mother and grandfather were progressive thinkers, so I felt at home in the peace movement and the women's movement, and that has influenced my music."

While Nyro continued to write, she did not re-emerge as a performer until 1976 when she released the album Smile and embarked on a four-month tour. She recorded and toured intermittently into the early 1990s, but only on her own terms and turned down several lucrative film composing and TV offers.

She died of ovarian cancer in , at the age of 49. The same disease had claimed the life of her mother at the same age.

Laura Nyro is a mere footnote in the explosion of popular music in the late 1960s, but her influence on the musicians who came after her is enormous, especially the emergence of urban woman singer-songwriters.

Joni Mitchell has said that she was deeply influenced by Nyro, and that is obvious in the chordal progressions and phrasings. Same for Rickie Lee Jones and Suzanne Vega.

But Nyro, whose voice has been described as something between a "blues soprano" and a "charcoal-smudged alto," cannot be catagorized because she was as much at home with folkie hoe-downs and protest songs as jazz and blues.

"I’m not interested in conventional limitations when it comes to my songwriting," Nyro told an interviewer. "For instance, I may bring a certain feminist perspective to my songwriting, because that’s how I see life. I'm interested in art, poetry, and music. As that kind of artist, I can do anything. I can say anything. It’s about self-expression. It knows no package - there’s no such thing. That’s what being an artist is."

* * * * *
This, another in a series of appreciations of the musicians who have moved me over the years, is based in part on the Wikipedia entry on Nyro.

I loved Laura Nyro so much, to this day, one of my brothers still calls me "Laura." I went through five copies of "Eli" and was lucky enough to see her several times - including a Sunday afternoon gig at the old Main Point.

I think Laura was one of the greatest talents who ever lived. She could bring so much ENERGY through in her music - she had all the excitement and force of gospel, but brought in the discipline, wit, and intelligence of traditional pop along with the inventiveness of jazz.

In a way, I think it's a shame so many people cite her as an influence. If you told the average discerning music fan Laura opened the door for hundreds of "female confessional singer-songwriters" they would think "oh, so she was the first Jewel or Sheryl Crow? What a bore".

But Laura wasn't a confessional singer-songwriter, whining about her feelings and strumming a guitar. She was a brilliant composer and arranger who happened to write her own very intelligent songs and sing them beautifully. She was an amalgam of Bob Dylan, Nina Simon, and Miles Davis - not the Tori Amos of her time. Nobody can be compared to this brilliant woman, and she is surely missed in this present time of self-indulgence and mediocrity in music.

We love you, Laura.

Laura's mother was Jewish. Gilda. she named her son Gillian (Gil)after her mother. Smile, was a dedicated album around the death of her mother. Laura had a very Jewish way about her. Sure she is Italian as well, and its all over her, but her maternal connective tissue was around being partly Jewish. Her grandfather, Gilda's dad, was such a strong influence in her personal politics. Love, and Politics. I adored her muse, and still do.

The is picture is breathtaking.
In 1968, the song, Stoned Soul Picnic was deliberately placed between Timer and Emmie on ELI. This was to divert and lessen the combined impact Timer and Emmie would have had. They were inspired by her then flame and eventual life partner, Maria Desiderio. She was 13 years old in 1967 and Laura was 19. In 1997, shortly before she died Laura “oversaw the production of the album..." Stoned Soul Picnic,"... and made the track selection her final artistic project.” (Wikipedia) Curiously, she chose to use the original recordings from ELI , only this time Timer and Emmie were juxtaposed.
Please see my LGBT article
Emmie - Pop's first lesbian love song.
Ralph, Let’s call her Ralph

Laura Nyro will forever live in my mind body and soul. never will i forget the ten times i had the honor of seeing her live, each time profound and special. musically i take direction from her and hear her cords come through my own songs.really there are no words to describe the love and loss i feel for her. bless you laura.xxxxxxxxxxxxxxxxxxxxxxxxxx

A tremendous talent who left us much too early. I love Stoney End.

Ralph, you really dont know that. Chill. Its Ralphs fantasy.