Torture: The Day of Reckoning At Hand? 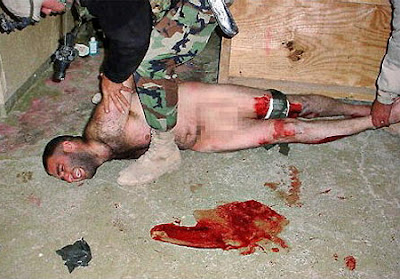 ABU GHRAIB
With the drip, drip, drip subtlety and perhaps even some of the pain of waterboarding, a growing number of politicians seem to be finally realizing that the use of torture is not only thoroughly un-American, it is morally abhorrent, and are speaking out about it.

Can there be any doubt, as I wrote not long ago, that there is no darker stain on the Bush presidency -- and on at the start of the new millennium -- than the top-down approval of the use of torture and this secrecy-obsessed administration's systematic efforts to justify its use on the one hand while denying that it approved its use on the other?

With too few exceptions, the silence inside the Beltway during years of torture revelations from Abu Ghraib to the Rumsfeld Gulag to Afghanistan has been one giant silent scream and has compounded the shame that I have felt over a country that I bleed red, white and blue for.

So what has now changed?

* The drumbeat in the American town square against torture has grown louder.

Credit is due blogger Andrew Sullivan, who has written about the horrifying similarities between the Gestapo's use of Verschärfte Vernehmung, enhanced torture techniques that would leave no visible marks, and the CIA's embrace of these techniques, as well as the tortured Nazi-like explanations of the White House and Justice Department in trying to justify their use.

* The administration's Orwellian parsing has collapsed under its own weight.

The proverbial straw that broke this camel's back was an October 4 New York Times investigative report that found while the Justice Department publicly declared torture to be "abhorrent" in a 2004 legal opinion, Attorney General Alberto Gonzalez then issued a secret opinion that endorsed the CIA's use of hard-core techniques like waterboarding that the agency had cherrypicked from the cookbooks of Soviet and Saudi dungeon masters.

* Discomfort over the refusal of Gonzalez' designated replacement to say whether he believes that waterboarding constitutes torture.

What looked like a slam-dunk nomination has instead become a long overdue moment of moral clarity as a small but growing number of senators say they are troubled by Michael Mukasey's equivocating over a technique condemned by U.S. military leaders, human rights organizations and prominent Republicans including Senators John McCain and Lindsey Graham.

Mukasey's waffling before the Senate Judiciary Committee came in response to a question from Dick Durbin, who then sent the nominee a follow-up letter with the signatures of all his fellow committee Democrats. Republican Arlen Specter then asked Mukasey to clarify his position, as did presidential candidate McCain and Graham, himself an Army lawyer.

Now other Democratic presidential wannabes -- Senators Clinton, Obama, Biden and Dodd -- say they will vote against Mukasey if he doesn't denounce waterboarding, and no amount of Rovian parsing on the part of the White House is going to bail out the nominee.

Congressional Democrats already have blocked confirmation of two other nominees to lesser posts -- John Rizzo, who had endorsed torture, as general counsel of the CIA, and Steven Bradbury, author of secret legal opinions on interrogation, as head of Justice's Office of Legal Counsel.

The White House whines that Mukasey has been put in an untenable position, and there indeed is some political grandstanding going on here. But I also would say that a long overdue day of reckoning has arrived.