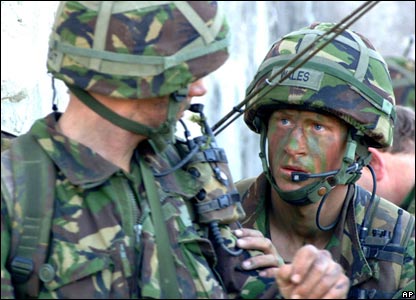 Prince Harry, third in the line of succession to the British throne, has graduated from the Sandhurst military training college, fueling speculation that he will be sent to Iraq.

The 21-year-old prince (at right in photo) famously remarked that he "would not drag my sorry arse through Sandhurst . . . I would not have joined if they had said I could not be in the frontline," but The Guardian says that he'll probably be assigned to something in between dangerous and a desk job.

Harry's matriculation has set off a lively debate at The Guardian News Blog.
Posted by Shaun Mullen at 3:35 PM
Email ThisBlogThis!Share to TwitterShare to FacebookShare to Pinterest