Will Rummy Finally Be Held Accountable? 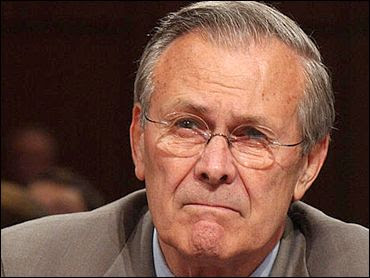 The upshot of the Bush Torture Regime — the systematic use of Nazi-like interrogation techniques against foes and friends like — has been deeply dissatisfying. The mainstream news media has been studiously uncurious about the criminal behavior of top administration officials and their lackies, and none have been held accountable.

But that may be about to change.

A federal district court judge in Washington, D.C., ruled earlier this month that a lawsuit against former Defense Secretary Donald Rumsfeld, one of the key architects of the torture regime, could go forward. While other lawsuits brought by so-called enemy combatants against ranking administration officials have foundered, this one is different because the plaintiff, identified in court papers as “Joe Doe,” is a former military translator who claims that he was tortured by U.S. forces at a Camp Cooper, a military base in Iraq, and the judge found that American citizens don’t lose their constitutional rights simply because it’s wartime.

Meanwhile, a three-judge court of appeals panel in Chicago came to a similar conclusion this week in green-lighting a lawsuit against Rumsfeld filed by Donald Vance and Nathan Ertel, both American military contractors who also claim they were tortured at Camp Cooper.

Vance, a Navy veteran who went to Iraq as a security contractor, contacted the FBI when he observed suspicious activities such as illegal weapons trading with American troops for liquor at the Iraq security firm where he worked. But when Army soldiers raided the firm, Vance and Ertel were detained as suspected enemy combatants and tortured. The Army was unaware that Vance was an informer.

Neither were ever charged, and in a familiar scenario, both were merely released at the Baghdad airport and had to make their way home on their own.

Rumsfeld’s lawyers argue that even even if the plaintiffs’ versions of events are true, Rumsfeld should not be held accountable because it was unreasonable that he would have known that the abuse he authorized was unconstitutional. Besides which, the court rulings are a troubling intrusion into the executive branch’s war-making powers.

Sadly, the Obama administration has taken the same position.