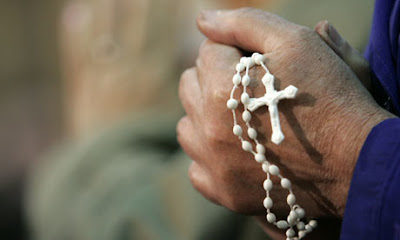 Those solemn men in robes who tell women what to do with their wombs but have proven beyond a doubt that they are incapable of telling their priests what they can't do with their willies, are still at it. I speak, of course, of that bastion of hypocrisy and perversion -- the Roman Catholic Church.

VATICAN URGED IRISH CHURCH TO LAY OFF
My late father's side of the family is devoutly Irish Roman Catholic, and while my father quietly renounced the church after leaving home at age 18, much of my childhood was informed by Masses, prayers before dinner at my paternal grandmother's house and the religious imagery on the otherwise bare walls of her modest row home. All of this makes the reality that the Roman Catholic Church in Ireland is dying all the more extraordinary.

Nearly 88 percent of all Irish are Catholic and numbers on how many of them are leaving the church are unreliable, but there is no doubt that the church is dying there thanks to a Vatican-sanctioned wickedness that has continued under the unwatchful eye of Pope Benedict XVI. It is difficult to be shocked anymore over the sex abuse scandal that has roiled Ireland for years involving hundreds of priests who abused thousands of children in a Catholic-run childcare network and, of course, were protected by the church.

But a new government report is a jaw dropper: Even after supposedly tougher Vatican guidelines were put in place in 1996 requiring that the police be notified about all child abuse allegations, two-thirds of such cases were kept from authorities by the archdiocese from 1996 to 2007 because, it seems, of a secret Vatican letter that urged treating the guidelines as non-binding.

"The rape and torture of children were downplayed or managed to uphold instead, the primacy of the institution, its power, standing and ‘reputation," said Taoiseach Enda Kenny, the Irish prime minister. "It is difficult to read the report . . . and avoid despair."

It is the first time that there has been direct evidence that the Vatican deliberately attempted to thwart law enforcement inquiries into the abuse, and the response from the Vatican to the report and letter was predictably unapologetic. Spokesman Father Federico Lombardi said the report was "somewhat unfortunate and disingenuous" and claimed there was nothing in the letter that could be interpreted as encouraging a cover-up.

There have been calls for the Irish government to expel the papal nuncio, but a government minister has ruled that out in the service of keeping diplomatic channels open.
HISTORY REPEATS ITSELF IN PHILADELPHIA
Closer to home, Cardinal Justin Rigali has finally stepped aside as head of the Philadelphia Catholic Archdiocese amidst a lingering sex abuse scandal that came to a head in February when a grand jury found that there had been a horrifying range of crimes, including rape, committed by priests and that high-rankling archdiocesan officials had sought to cover them up. A grand jury had issued similar findings in 2005, but little was done.

Cardinal Rigali had asserted early in the year that there were no priests in active ministry who had been accused of abuse, but then reversed field and suspended 21 of them in one day, prompting criticism that he should have alerted prosecutors sooner.

The cardinal's successor as the head of the region's 1.5 million Catholics is Archbishop Charles J. Chaput, a pop-off who has spoken out in favor of denying communion to Catholic officeholders who support abortion and gay rights. He also criticized the University of Notre Dame, a Catholic institution, for granting President Obama an honorary degree in 2009 because of his stance on abortion.

MIAMI VICE
John C. Favalora likes attractive young men to sit on his lap and allegedly treats them to trips in the Florida Keys. He was, until recently, part owner of a company that makes "all natural" erection-inducing beverages. He's also the Archbishop Emeritus of Miami.

Favalora, who was the most powerful Catholic official in Southern Florida from 1994 until last year, stands accused of cultivating what one group of Catholics describes as a corrupt "homosexual superculture" in the 195 churches, schools, missions, seminaries, and universities that make up the Miami Archdiocese.

If their allegations are to true, for 16 years Favalora ran his organization like the Mafia don, rewarding his favorite homosexual sons and forgiving their many indiscretions. These allegedly include rampant sex, embezzlement, alcoholism, and the railroading of chaste priests among them—while punishing those who tried to complained.

www.muebles-en-burgos.com said...
This comment has been removed by a blog administrator.
1:37 PM