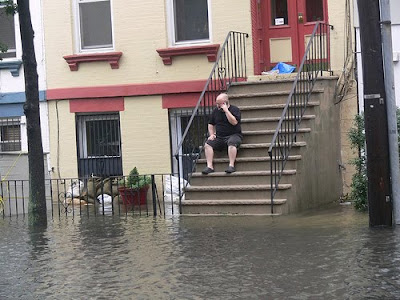 And so Irene passes into history having been an unusual hurricane that fortunately did not live up to its potential.

Meteorologists were predicting a storm of the century, but by the time Irene hit the metropolitan New York area it more resembled, in the words of one wag, an overweight jogger. There were a number of explanations for this, but the most significant is that the storm -- while immense and a huge rainmaker that took at least 16 lives in six states -- failed to undergo an expected eyewall transformation.

Forecasters had expected that a spinning band of clouds near Irene's center, called the inner eyewall, to collapse and be replaced by an outer band that would then contract, causing the hurricane to strengthen. Irene never completed that cycle.

The fact there were "only" 16 deaths is attributable to state and local emergency preparedness plans that planned for the worst and included mandatory evacuation orders in coastal and low-lying areas. In years past, hurricanes of comparable strength would have caused many more deaths. Mass transit shutdowns and power outages -- and at one point over 9 million people were without power -- seem like a relatively small price to pay.

Most media attention was on New York City, but it got off relatively unscathed while the suburbs and New England experienced the worst flooding.

We rode out Irene at the mountain retreat. Power and Internet service was uninterrupted despite high winds and torrential rains, which gave us the opportunity to follow the storm closely. We have no television, so we went to The New York Times early and often over the weekend.

Its coverage, which included maps, graphics, photos from pros and readers alike and in-depth articles, was superb. The full-screen interactive map of Irene as she made her way up the coast was hugely informative.

The Weather Channel gets no such praise. Better safe than sorry, and all that, but it was obvious to this amateur on Friday morning that Irene was falling apart as it neared the Outer Banks of North Carolina. A conversation with a retired Air Force meteorologist whom I knew confirmed that was the case, but as late as 6 a.m. on Saturday when I departed for the mountain retreat, Al Roker and his posse were in full overhype mode.

The bottom line: It could have been worse.


Posted by Shaun Mullen at 12:08 AM
Email ThisBlogThis!Share to TwitterShare to FacebookShare to Pinterest