'I Have A Dream': Reflecting On The Greatest Speech In American History 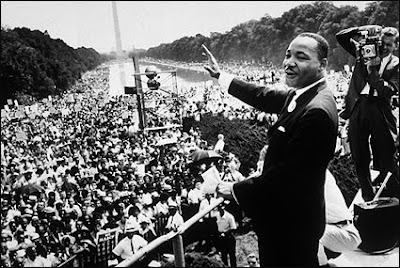 Forty-eight years ago this Sunday and in weather far more auspicious than the hurricane-driven winds and rain expected to lash the nation's capital, the 34-year-old son of a Georgia preacher, his back to the Lincoln Memorial, delivered a 17-minute speech to 200,000 people gathered around the Reflecting Pool that was not just the defining moment of the civil rights movement but the greatest speech given by an American since the Gettysburg Address a century earlier. And there has been none greater since.

Dr, Martin Luther King Jr.'s "I Have a Dream" speech, as it quickly became known, was ostensibly a call for racial equality and an end to discrimination. But it was much more than that -- like Lincoln's address a hugely transformative moment in our history that educated and inspired. Amidst the throng were my mother and father, both politically active but after that day dedicated to the civil rights movement. (I myself was driving back from the Delaware shore in my father's Plymouth Fury convertible with my girlfriend.)

The most memorable part of the speech was extemporaneous as King departed from his prepared text for a peroration he had recently included in his speeches on the theme of "I have a dream," which probably was prompted by gospel singer Mahalia Jackson's cry, "Tell them about the dream, Martin!"

That is true enough. It also is true that with every succeeding generation fewer white Americans are fettered by the ball and chain of believing that blacks are inferior. And it is indisputably true that all vestiges of racial discrimination will never been wiped out.

"It would be fatal for the nation to overlook the urgency of the moment," King declared on that historic dat, yet today that urgency is a relic of a simpler time and his dream remains unfulfilled.

Click here for an audio recording of the speech and here for the text. And here for an architectural review of the new King Memorial on the edge of the Tidal Pool in Washington, which is scheduled to be dedicated on Sunday.