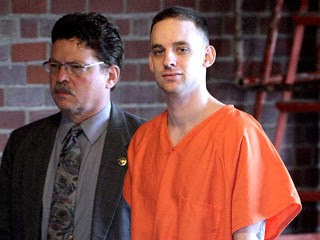 Green and only known photo (below) of gang rape victim

While it was never in doubt that the Monster of Mahmoudiya would die in prison, it has been decided that his death should come later rather than sooner.

That is the result of the four-week trial of Steven Green, the boy-man ringleader of 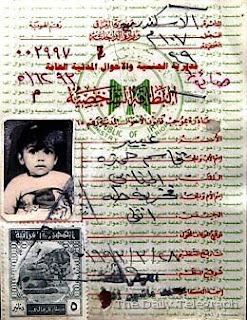 the gang rape and murder of 14-year-old Abeer Qassim al-Janabi, her parents and young sister in a village south of Baghdad on March 12, 2006.

The nine woman and three male jurors deliberated over two days before declaring themselves hung yesterday on the question of whether Green should be given the death penalty, so he will serve life in prison without parole.

* * * * *
The Army first engineered a cover-up, then claimed that Abeer was much older as if to excuse the crime, and finally washed its hands of one of the most repellent acts committed by American troops against occupied Iraqis, leaving it to a civilian federal court jury in Paducah, Kentucky to decide the fate of Green, who turned 24 five days after the trial began on April 27.

The trial-phase verdict -- guilty on all 16 felony counts -- was never in doubt.

Green, who was the first former U.S. soldier to face the death penalty for war crimes in a civilian court, has never denied what happened. The then-private first class had matter of factly 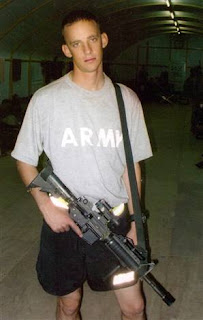 explained to a journalist three weeks before the rape-murders that "I came over here to kill people," had repeatedly informed his commanding officer that he needed to be taken out of action because he wanted to kill Iraqis, and told the FBI agents who arrested him that "You probably think I'm a monster."

That is an apt description:

Green herded Abeer's father, mother and her sister into a bedroom of the family's modest home. Her brothers were at school.

Green then turned on Abeer, whose dressing gown and bra were torn from her body and her legs tied. Green and two other soldiers then took turns raping her. By the time they had finished, blood was flowing from her vagina. Green then shot Abeer in the head two or three times, threw a blanket over her torso and set her body afire in a crude effort to cover up the atrocity.

"Steven Green failed to live up to his duty," Prosecutor Marisa Ford declared during trial-phase closing arguments. "He didn't show mercy to Abeer Al-Janabi, he took away the two orphaned brother's hope for a normal life, and by doing so he lost the honor of calling himself a U.S. soldier; Steven Green doesn't deserve mercy."

That left lead defense attorney Pat Bouldin to convince jurors that Green did deserve mercy during the penalty phase.

Bouldin successfully did that through a legal concept called residual doubt. That is, having found Green guilty beyond a reasonable doubt, enough jurors could be convinced that others also were to blame and they would sentence him to life without parole and not death, or in the case of a hung jury there would be a similar outcome.

This effort was helped along by efforts to humanize Green, including testimony that he was born to a wastrel mother and beaten regularly

by an older brother, once so badly that "his head swelled up like a pumpkin." A psychiatrist testified that Green had a damaged brain that made it all the more likely that he would suffer from post traumatic stress disorder and eventually snap when repeatedly confronted with the horrors of combat.

"He works well in a structured environment," explained Dr. Ruben Gur, "But in a chaotic environment, he behaves chaotically."

Among those snared in the defense's blame-game net was a psychiatric nurse-practitioner whom Bouldin claimed failed to see that Green was a ticking time bomb. In fact, Lieutenant Colonel Karen Marrs well understood that, but the Army was desperate for bodies without regard to whether they were able.

Marrs testified that Green's platoon, which had been taking extremely heavy casualties as it battled Sunni insurgents in the so-called Triangle of Death, had the worst 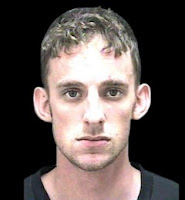 morale that she had ever seen. She said the unit was "red," meaning it was "mission incapable" because the troops were "hostile, vengeful and needed increased control and command," without which there was a greater likelihood of misconduct.

The nurse-practitioner probably would agree that the blame game did not extend nearly far enough.

If it did, also implicated would be an Army that encouraged a sociopath with a criminal record to enlist, fast-tracked him through basic training and sent him off to where his homicidal tendencies were merely acknowledged and dealt with by medication and "Atta boys" as he was repeatedly sent back into the hell hole that was Mahmoudiyah, one of the three points in the triangle.

satisfy a neoconservative wet dream, required no sacrifices at home and would be over in a nonce, changed the rules of engagement to suit their political caprices when the war dragged on and on, and presided over only half-hearted efforts to win over a people for whom a never ending occupation had become a two-way nightmare.

Green showed little emotion during the trial, but his eyes did widen when a sister and brother of Abeer's father took the stand.

The sister testified that Abeer's orphaned twin brothers no longer attend school and often talk of committing suicide. The brother, while stopping short of asking for the death penalty as the Iraqi government had demanded, asked for justice for his nephews and wished peace upon the courtroom.

Prosecutor Ford and defense attorney Scott Wendelsdorf made very different pleas at the conclusion of the penalty phase, which took 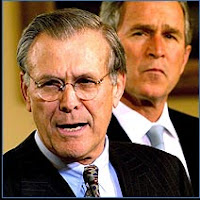 twice as long as the trial phase.

Said Ford: "Green's crimes were unthinkable and outrageous . . . finish what he started by putting him to death."

And Wendelsdorf: "America does not kill its broken warriors. Spare this broken boy, for God's sake. Spare him."

News media and blog coverage of the trial was virtually non existent.

CNN was the only major outlet to provide a semblance of regular coverage, a reflection of the fact that a mainstream media that was complicitous in the lies that Bush and Rumsfeld peddled has tried to wish away a war that has left the public consciousness -- and consequences like the rape and murder of Abeer Qassim al-Janabi.

Please click here for "Happy Birthday, Abeer," my widely read takeout on the events leading up to the crime and the cover-up, and here for a profile of soldiers like Steven Green by noted psychologist Dr. Clarissa Pinkola Estés.

This post was compiled in part from dispatches from Agence France Presse, The Associated Press, CNN, Houston Chronicle, Louisville Courier Journal and The Huffington Post.